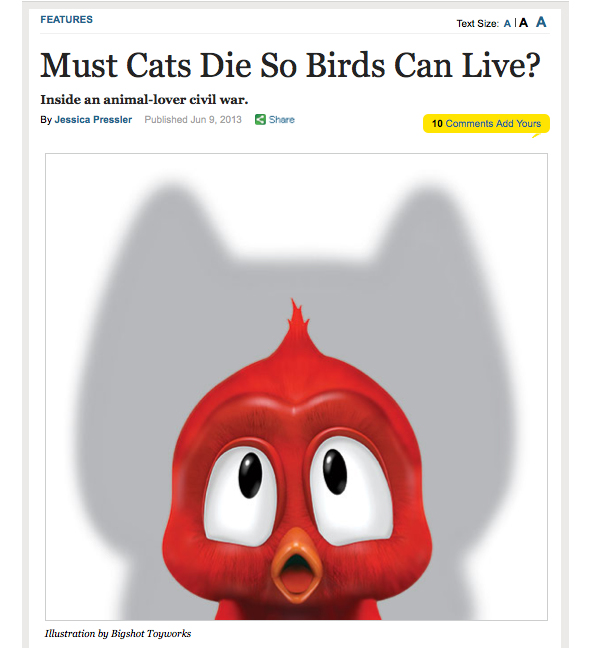 “I’m pretty sure both sides are going to hate it,” warned New York magazine writer Jessica Pressler, referring to her feature for this week’s issue, “Must Cats Die So Birds Can Live?” When I first spoke to Pressler in March, she’d indicated that she knew the subject was complex. Her most recent e-mail, however, sent just a few days before the story was published, made it clear that the piece had taken an unfortunate turn: “In the end there were so many different bits that needed to be covered,” Pressler explained. “A lot of it ended up being about the argument between the two sides.”

Still, hate is a strong word. How about enormously disappointed?

And not just because I spent a fair amount of time talking to Pressler, and then following up with additional information via e-mail. And I don’t particularly mind her reference to me as “the Nancy Grace of the [Nico Dauphiné] trial” (which, Pressler explained in Friday’s e-mail, she “thought/hoped [I] would find enjoyable/amusing as opposed to annoying”).

And if the story seems rather one-sided—as it does to me—well, I’ve pretty well grown accustomed to that, even from otherwise top-notch publications. (This is not to make excuses for Pressler or her editors, only to acknowledge my own frame of reference; I’m disappointed, but not terribly surprised.)

The real problem with Pressler’s article, just as she indicated, is its focus on the debate (or, as American Bird Conservancy president George Fenwick described it to Pressler, “war”) at the expense of any significant depth. From its unchallenged claims (e.g., “For every cat on the street, 200 birds are killed annually,” from Fenwick) and familiar “powerful cat lobby” trope (e.g., “We’re like the underdog,” from Pulitzer Prize-winning author and ABC board member Jonathan Franzen) to its suggestion (more than once) that Dauphiné* was framed (e.g., “They were after her… They wanted to take her down. And they did it,” from Wildlife Center of Virginia president Ed Clark), Pressler’s story fails to deliver the kind of solid reporting readers have come to expect from New York.

I should know—I’ve subscribed to the magazine for several years now.

All that said, Pressler nevertheless provides us with a couple juicy quotes—as when “KittyCam” researcher Kerri Ann Loyd,** referring to the Smithsonian/U.S. Fish and Wildlife Service paper published earlier this year to great fanfare, confessed: “I probably shouldn’t say this, but I wish they’d waited for some more research.”

And New York Times science reporter Natalie Angier’s wildly naïve defense of the same paper: “To suggest these studies are wrong, that’s just silly. All you have to do is look at the cats in my backyard.”

As I say, I don’t hate the article. It’s too bad, though, that its greatest contribution to the ongoing debate will likely be missed by most readers: once again, opponents have offered nothing whatsoever in the way of a feasible alternative to TNR. Instead, they continue to promote (some more noisily than others, of course) more of the same costly, ineffective, and unpalatable killing that, for generations now, has done nothing to diminish the population of free-roaming cats—or increase the population of birds.

* Whose work, I just learned via the Feral Cats in the News blog, is once again being funded by American Taxpayers. N. Suzanne Dauphine, as apparently she now prefers to be known, is chief wildlife biologist for the Wildlife Division of the American Samoa’s Department of Marine and Wildlife Resources.

** Perhaps Loyd would be more likely to go along quietly had her work not been so badly mischaracterized by ABC and The Wildlife Society a joint news release last August.