In a study recently published in Biological Conservation, Daniel Herrera and his co-authors report that “predation by cats is greatest where supplemental food is most abundant” and that native species are at greatest risk in areas closer to forest edges. As a result, they recommend “the implementation of cat exclusionary buffer zones around urban forests.”

A careful look at the authors’ analysis, though, raises serious doubts about their sweeping conclusions.

In developing their “cat exclusionary buffer zones around urban forests,” Herrera et al. rely heavily on previous research (which has its own issues) documenting the home range of pet cats. They argue that using only average home range is insufficient, since, “in urban areas, many native species are found beyond the borders of green spaces… and variation in cat roaming behavior can be substantial” [1]. So instead, they use “the upper estimate of the average home range size of an urban cat” from a previous study: 0.092 square km, or about 22.7 acres [2].

It’s important to note that distributions of home range data are highly skewed (as illustrated in the figure below, taken from the very study Herrera et al. relied on for their analysis). For this reason, it’s much more appropriate to use the median rather than the mean, since the mean significantly over-estimates how far the “average” cat roams. This is readily apparent in Figure 2(a): the average is 0.036 square km—but approximately 488 of the 875 cats tracked (55.8%) had home ranges on the order of 0.025 square km. The median is more like 0.02 square km. 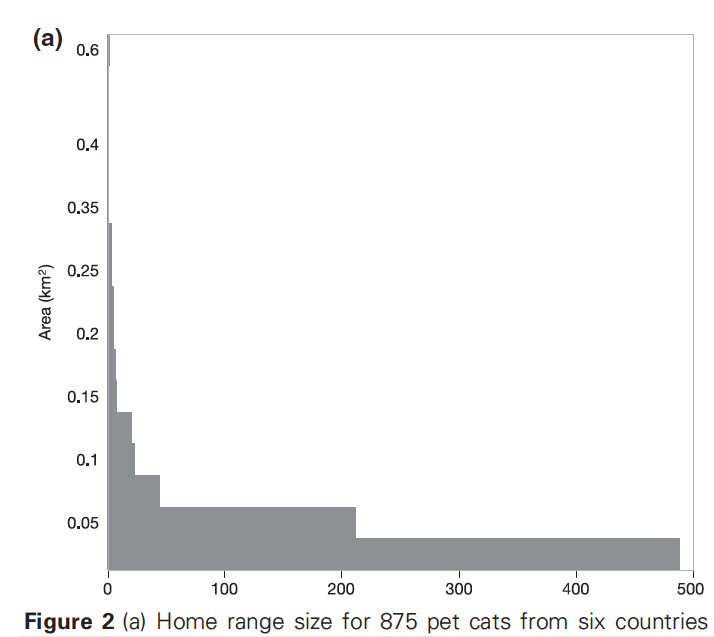 This is a relatively minor discrepancy, however, in light of the fact that Herrera et al. studied cats in Washington, DC. The home range data they relied on from Kays et al. [2] included lots of cats from rural areas as well, where cats roam farther—sometime much farther [see 3 for a summary]. Indeed, the dataset used by Kays et al. included very few cats from areas as densely populated as Washington, DC.

Herrera claim that they used “the upper estimate of the average home range size of an urban cat” for their analysis, but this is incorrect. The number they used is the upper end of an average of both rural and urban cats—including very few who were “as urban” as those in the District. Again, it’s well known that cats in densely populated areas roam less. And sterilized cats tend to roam less than intact cats do [2]. Even in more rural areas, well-managed community cats typically stick close to “home.” For her PhD work, Felicia Nutter monitored cats in Randolph County, NC, for several years, concluding: “The home ranges of the managed feral cats were small, usually less than 1 hectare [the equivalent of 0.01 square km, or 2.5 acres], regardless of sex or reproductive status… the sizes of intact and castrated male cat home ranges were similar, as were the home ranges of intact and spayed female cats” [4].

Here’s why this matters: the larger an urban cat’s home range, the more likely they’ll encounter natural areas. This is especially true in a place like Washington, DC, which is a patchwork of “disturbed” areas and natural areas (e.g., dense residential areas adjacent to parks). Make the home range large enough, and the whole place is a no-go zone. Indeed, this is precisely what Herrera et al. conclude:

“The near-zero probability that a cat preys upon a native species… would require excluding cats from 91.7% of the study area” [1].

Not surprisingly, they don’t go into details about what this would entail.

Herrera et al. [1] seem to suggest that community cats are even more of a problem than other outdoor cats: “The total number of cat predation events at a site was best predicted by a cat’s prior participation in a TNR program… and local feeding location density.” Perhaps I’m missing something, but it seems like they’re overlooking an obvious point: there are generally more TNR cats in areas with more cats overall—and those parts of a community tend to be in densely populated urban areas, further from natural areas.

In addition, the authors note: “our analyses reveal that predation by cats is greatest where supplemental food is most abundant,” and therefore recommend that “management policies explicitly consider the spatial location of cat-feeding sites” [1]. Again, I might be missing something, but if predation “is greatest where supplemental food is most abundant,” that’s probably because that’s where the cats are. And, of course, the feeding is a response to the presence of cats. So, building on the previous point, (1) the TNR cats are where the rest of the cats are, and (2) all the cats are where the food is.

The claim that predation “is greatest where supplemental food is most abundant,” contradicts the findings of an earlier study led by co-author Michael Cove. In that study, conducted in the Florida Keys, Cove and his co-authors [5] reported that cats living farther away from human settlements (e.g., more than 1.9 miles) were more likely to prey on wildlife, and that more than 81% of the free-roaming cats tested “consumed mostly anthropogenic foods.”

In other words, the predation was greatest where supplemental food was least abundant. These findings correspond reasonably well with those of a study in Chile, where researchers concluded that “underfed” cats are nearly five times as likely to prey on wildlife, compared to adequately fed cats [6]. In fact, Herrera et al. [1] documented remarkably little predation overall: just 75 instances in 33,134 observations of cats (0.23%).

Although Cove’s earlier study is referred to repeatedly by Herrera et al. [1], the authors never acknowledge these important findings from the earlier study. Instead, they argue that, because “predation by cats is greatest where supplemental food is most abundant… management policies [should] explicitly consider the spatial location of cat-feeding sites.”

Herrera et al. [1] place a great deal of emphasis on the apparent risk to native species. However, their own research documented predation of just six different native species across eight (presumed) predation events:

To draw any meaningful conclusions on such a small sample is at best questionable.

If one can accept the small sample size, then why not focus on the fact that non-native species were predated at a rate of more than seven times that of native species? Readers could be forgiven for missing this point, given how little attention the authors give it.

It’s worth pointing out that all of the native species identified are common ones, too. The mourning dove, for example, is, according to the International Union for Conservation of Nature, “common across the continent and generally have prospered as people settled the landscape,” although “populations declined by about 15% between 1966 and 2015, according to the North American Breeding Bird Survey.” The Northern cardinal is “abundant in eastern and central North America… their numbers have increased by an estimated 0.32% per year since 1966.” And the yellow-throated warbler population has “increased by 50% between 1966 and 2014.” This species “appear[s]to be expanding northward and are recovering from population losses at the northern edge of their range in southern Michigan and northern Ohio, the causes of which are unknown.”

The fact that these species are common would seem to be an important point, but the authors seem more interested in focusing on their “nativeness.” (The native/non-native classification seems more useful for scaremongering and demonstrating tribal allegiance than for any legitimate conservation work, but that’s another conversation.)

Herrera et al. [1] acknowledge that “cats are opportunistic generalists, and their prey composition is generally proportionate to local prey availability,” but fail to consider the implications of this. Even the paper’s title—“prey selection” implies a preference for native species. I’m unaware of any cats using DoorDash or Uber Eats to have their preferred prey delivered; if cats caught more native prey near natural areas, it’s because the prey was both nearby and plentiful. Sweeping claims about the risk these cats pose to native species—presumably all of them—are simply not supported by the evidence presented.

Invasive Biology isn’t a “science”, it’s a philosophy….an extremely violent one akin to nazism, because it unleashes mass murder/suffering on anyone who’s place of ancestral origin is disliked by the violent thugs who form the “invasive biology” community.