Despite its dramatic-sounding conclusions, UK research into the “sub-lethal effects” of cats reveals very little about real-world predator-prey dynamics or their potential impact on bird populations. 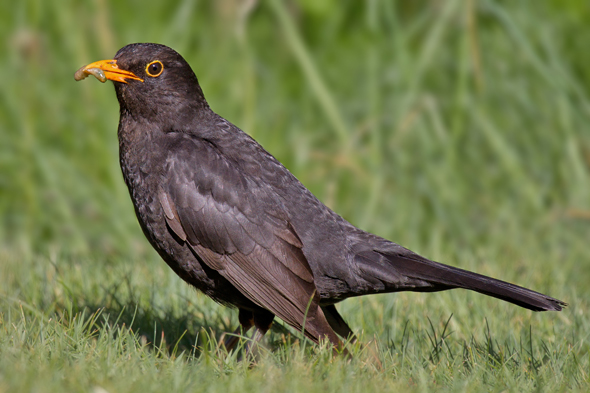 “A new study from British scientists has documented for the first time, significant new impacts to birds from outdoor cats,” announced an April 18 news release from the American Bird Conservancy, “reporting that even brief appearances of cats near avian nest sites leads to at least a doubling in lethal nest predation of eggs and young birds by third-party animals.” The study, by PhD student Colin Bonnington, Kevin J. Gaston, professor of biodiversity and conservation at the University of Exeter, and Karl L. Evans, conservation biology lecturer at the University of Sheffield (and Bonnington’s PhD advisor), was published earlier this year in the Journal of Applied Ecology as “Fearing the feline: domestic cats reduce avian fecundity through trait-mediated indirect effects that increase nest predation by other species.”

How the Research was Conducted

Researchers began by locating blackbird nests in urban Sheffield, England, during the 2010 and 2011 breeding seasons (March–August). They then monitored the behavior of nesting parents following the presentation, during the first year, of three different taxidermy mounts: an adult cat, a grey squirrel, and an adult rabbit “as a non-predator control.” [1] During 2011, the researchers used two “models”—to use their terminology—of each species, including “a replica adult domestic cat.” [1] (More on that “replica” shortly.)

During each model presentation, the researchers recorded parental behavior “from a concealed location [49–98 feet] away, paying particular attention to alarm calling and aggressive behavior (e.g., “striking, diving towards or hovering within [6.6 ft.] of it”). Following the model’s removal, “provisioning visits” were observed for an additional 45–60 minutes.

What the Research Revealed

“The domestic cat model consistently elicited significantly higher alarm calling rates,” explain Bonnington et al., compared to the rabbit model, and in many cases, the squirrel model. [1] Aggression toward the model varied with the chick development stage. During the egg stage, blackbird parents responded similarly to each of the models; during the young chick stage, however, “aggression was higher in response to the domestic cat than the squirrel or rabbit, but differences were not significant,” and “when old chicks were in the nest, aggression towards the domestic cat was significantly higher, by an order of magnitude, than towards the rabbit and grey squirrel.” [1]

Sixteen nests were predated following model presentation. Here, too, differences were observed relative to both the chick development stage and the model used. During the egg stage, exposure to the cat model resulted in a 23 percent predation rate, compared to 5 percent for the squirrel model and none for the rabbit model. During the young chick stage, 13 percent of nests exposed to the cat model were predated while none of the nests exposed to either the squirrel or rabbit models was predated. And during the old chick stage, none of the nests were predated, “presumably because at this stage nestlings are sufficiently well developed to disperse rapidly from the nest site when threatened by a predator.” [1]

Among the researchers’ far-reaching conclusions:

“Here we have yet another peer-reviewed study that documents additional, serious impacts to bird populations that previously have not been fully appreciated,” proclaimed Clare Nielsen, ABC’s director of communications in that April news release. “Feral and outdoor cats are simply devastating populations of birds and other wildlife.”

Is ABC really suggesting that dead cats are “devastating populations of birds and other wildlife”? After all, we’re talking about taxidermy mounts here.

Correction: one taxidermy mount of a domestic cat.

The “replica” added to the study during the second year, was, as Karl Evans explained to me via e-mail, actually “a black and white stuffed cuddly toy cat.”

Not that I considered the work to be particularly rigorous before I learned of this detail (one ABC either didn’t look into or didn’t feel important enough to publicize). As I explained to Evans, I think the study’s highly questionable design precludes the sort of conclusions he and his co-authors (and ABC) make. My objection is based largely on two key factors: (1) the artificial nature of the investigation, and (2) its brief duration.

In the end, I simply don’t see that placing taxidermy models or plush toys near bird nests is going to tell us much about the population dynamics of a particular species. (In fact, I’m rather surprised the work was funded by the UK’s Natural Environment Research Council, which, according to the agency’s website, “coordinate[s] some of the world’s most exciting research projects.”)

However, such work can be used—as ABC has once again demonstrated—to fuel the long-standing witch-hunt against free-roaming cats. Although researchers are in no position to prevent their work from being co-opted in this way, they can certainly foresee the likelihood—and they therefore have an additional responsibility to produce only the most rigorous work and present only the strongest evidence.

* “In addition to their sub-lethal effects,” explain Bonnington et al., “predators can determine prey population growth rates through other indirect mechanisms by altering prey species’ traits in a manner that changes their interactions with other species.” [1]

** Evans and his co-authors, referring to the work of Thomas Schaefer, suggest that this “is within the time range during which mammalian predators typically remain within the vicinity of birds’ nests,” But Schaefer was referring specifically to the time taken “to eat the nest contents.” [3] And although Schaefer did find that “mammals took significantly longer to eat the nest contents” than did avian predators, which “usually stayed just a few seconds at the nest to remove eggs or young,” it seems smaller mammals (e.g., mice) stayed longer than did larger mammals (e.g., martens).

Cats and Birds, In the News, Threats to Wildlife