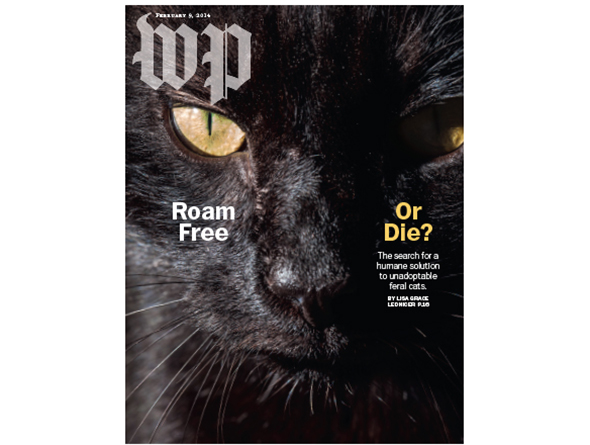 By the time readers had the print version of last week’s Washington Post Magazine in their ink-stained hands, the online version of its cover story, “Is it more humane to kill stray cats, or let them fend alone?,” had already been revised.

“Julie Levy, director of Maddie’s Shelter Medicine Program at the University of Florida,” reads the original, “estimates between 71 percent and 94 percent of the cat population must be neutered to bring the birth rate below replacement level.”

“In addition to TNR, she says, caregivers need to stop feeding free-roaming cats and keep pet cats inside for there to be ‘a humane, gradual reduction in cat numbers.’ At one university campus she studied, the feral cat population was reduced from 155 in 1991 to 23 in 2002 through a combination of adoption, euthanizing sick cats, natural attrition and neutering ‘virtually all resident cats.’” [1]

Sometime between Thursday, when the online version was posted, and Sunday, the second sentence disappeared from the Post website.

And this wasn’t the only problem with the story, which, as Alley Cat Allies noted recently on their website, “is full of errors about Trap-Neuter-Return.”

Indeed, the reporting is hardly what we’ve come to expect of the Post—with writer Lisa Grace Lednicer quoting 10-year-old papers written by longtime TNR opponents David Jessup and Paul Barrows rather than actually contacting them. (Granted, neither seems to have anything new to bring to the conversation if their recent attempts—Jessup in a 2012 paper describing free-roaming cats as “a significant public health threat,” and Barrows in his contribution to the 2012 book Nature Wars—are any indication. Still though, I think the paper’s readers might be curious.)

“They won’t die comfortably in someone’s arms; they will die badly,” said Newkirk, referring to the alleged plight of (presumably all) free-roaming cats.

“It’s no kindness; it’s because people feel uncomfortable with euthanasia. That’s understandable, but it’s no excuse.” [1]

Well, OK, nothing new there. Indeed, this has been PETA’s position for some time now: these cats are better off dead.

Fenwick wants the cats dead too, of course, arguing that “these cats are not wanted by society.”

“There’s a misguided notion that euthanasia of cats is somehow immoral. It’s not immoral—it’s just a sad and necessary fact.” [1]

No doubt many of the Post’s readers unfamiliar with the issue were left to wonder what planet these two are from. But even those of us who have been paying attention for some time will have noticed a significant shift in Fenwick’s rhetoric. Not long ago, he and his ABC colleagues generally avoided this kind of direct call for more killing.

In late 2010, for example, when ABC hosted a webinar to promote their book The American Bird Conservancy Guide to Bird Conservation (which, among other things, advises readers to “make TNR and the feeding of cat colonies illegal,” [2]), I asked co-authors Daniel Lebbin (conservation biologist for ABC) and Michael Parr (now ABC’s VP of planning and program development) about their recommendation for all the cats already living outdoors.

“What we recommend,” said Parr, “as an alternative to [TNR], is not abandoning cats in the first place.”

“Other options would be to house those cats in shelters or outdoor sanctuaries which could be managed. Clearly, it’s a huge problem, and the solutions to this are going be things we going to have to work together on for a long period of time, but certainly that would be my first reaction to that question.”

Well, at least the public is finally getting a sense of what these folks are really all about.