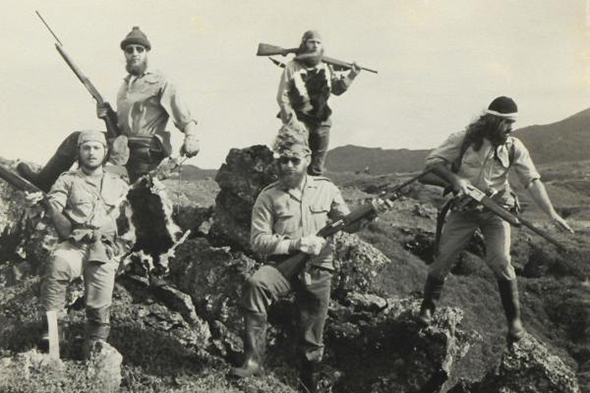 As one of my colleagues often says, never bet against irony.

As a result of these latest developments, BirdLife South Africa has launched a campaign to raise nearly $17,000 for a “feasibility study and risk assessment” for the eradication of mice. As the organization admits on its website, “no thought was given to tackling mice” following the eradication of cats, “even though their impacts on invertebrates such as the flightless moths and weevils, plant communities, nutrient cycles, etc., were gigantic. Little did we know that mice could become such a significant threat to seabirds.”

A similarly hard lesson was learned on Macquarie Island when, after the last cat was killed in 2000, the island was quickly overrun with rabbits. “Scientists have concluded that the sub-Antarctic wildlife refuge’s ravaged ecosystem is a textbook example of the wrong way to eradicate pests,” explains a January 2009 story in The Sydney Morning Herald. “The cats were keeping a lid on other pests and a federal-state plan to eradicate rabbits, rats and mice will now cost about $24 million. [3]

Tragic, but at least it’s not the sort of thing that could happen here in the U.S., right?

In fact, this very concern was brought up to the U.S. Fish and Wildlife Service in 2011, in response to their Florida Keys National Wildlife Refuges Complex Integrated Predator Management Plan/Draft Environmental Assessment. In it, the agency failed to acknowledge the obvious risks to the very species they claim they are trying to protect if, as a result of cats being removed, the population of black rats increased. And controlling these rats is complicated considerably by the need to protect Lower Keys marsh rabbits, which, according to the agency’s own report, will likely die if they ingest “poisons used to control black rats.” [4]

True to form, USFWS dismissed these concerns, suggesting—without providing the slightest bit of evidence—that “native snakes that are vulnerable to cat predation would become less vulnerable as a result of cat control, which may allow them to increase predation pressure on rats.” [5] (On the contrary, their own reports indicate that snakes are likely predators of the endangered Key Largo Woodrat and [6] and Rice Rat. [7] Nowhere have I been able to find documented evidence of cats in the Keys killing snakes in any appreciable numbers.)

And then there’s Hawaii, perhaps the most likely location for a true eradication campaign in this country. Indeed, Cheryl Lohr said as much in her 2012 PhD dissertation:

“Understanding why some people, spread, proliferate, and defend introduced species will aid my ability to control or eradicate them, and hence protect the unique and rare aspects of localities like the Hawaiian Islands.” [8]

And Lohr, along with her PhD advisor—and staunch TNR opponent—Chris Lepczyk, have produced their share of junk science to attempt to justify such a campaign, claiming, for example to have economics and public opinion on their side.

What’s troubling is that such organizations and individuals may very well end up the “deciders,” as they are, all too often, taken seriously be people who ought to know better. And, just as important, they continue to receive public funding to manufacture more of the junk science necessary to advance their agenda.

And if cats are eradicated from the Florida Keys or Hawaiian Islands—leading to an explosion of rats, rabbits, or mice? No doubt there’s a method—and the funding—to eradicate them, too.

3. Darby, A., When the cat’s away rabbits devastate island sanctuary, in The Sydney Morning Herald2009.

8. Lohr, C.A., Human dimensions of introduced terrestrial vertebrates in the hawaiian islands, in Natural Resources and Environmental Management2012, University of Hawaii at Manoa.

In the News, lethal control methods

The island had a rodent problem long before the cats were introduced. The 2,000+ cats were unable to rid the island of the mice and instead caused the extinction of 3 species. The news article goes to show that introducing species, either accidentally or intentionally, is never a sound ecological solution.

Great article pointing out the stupidity of the all or nothing answers we so often receive when solving great problems. The right answer is, of course, a slow and careful movement towards what is desired. Why not start with stopping proliferation in some fashion. Surely it would be more cost effective to just allow those who care about whatever is about to be abolished to use a more subtle approach and see if it makes a positive difference. Especially when we KNOW the complete and utter cleanse method does not work. Good luck with bringing this important decision to light and hopefully to a end that allows us to retain our morality.

A point of clarification…

While it’s true the article refers to “the extinction of three petrel species.” The only documentation I’ve been unable to find documentation of this, although a couple papers refer to the localized extinction of the common diving petrel. [1, 2] This is a critical distinction; in fact, this is a species of “Least Concern” according to the International Union for Conservation of Nature.

Whether or not these particular species are among the “rare and endangered seabirds” (now being eaten by mice) to which the article refers is unclear.

The Whac-A-Mole approach to feline management–admittedly, in very limited applications–perhaps does have its place? See HERE: https://www.youtube.com/watch?v=Q_udqEp_YR4