The mainstream media is having a field day with a new U.K. study—but it’s a celebration that’s largely uncalled for.

Let me set the scene:

It’s Spring 2010. You’re a cat owner in the small English village of Mawnan Smith, population about 1,500. And like most* of your fellow cat owners in the UK, you allow your cat(s) to go outdoors. You and 30 of your neighbors have just taken part in a four-month sudy comprised of the following three phases:

1. You were asked to predict how many prey items your cats would bring home.

2. You then recorded, monthly, each of those prey items.

3. Finally, you were asked to respond to the following five suvey questions using a four-point Likert scale:

Ok, here’s where things get interesting.

You and most of your neighbors participating in the study overestimated your cats’ hunting prowess—some by a large margin. As it turns out, most of the cats brought home fewer prey items than was predicted, as indicated by the points above the diagonal line in the graph below (which also includes data from another village in the study).

When it comes time to answer those survey questions, then, how likely are you to agree with statements 1, 3, 4, and 5? As they say, if it ain’t broke, don’t fix it. 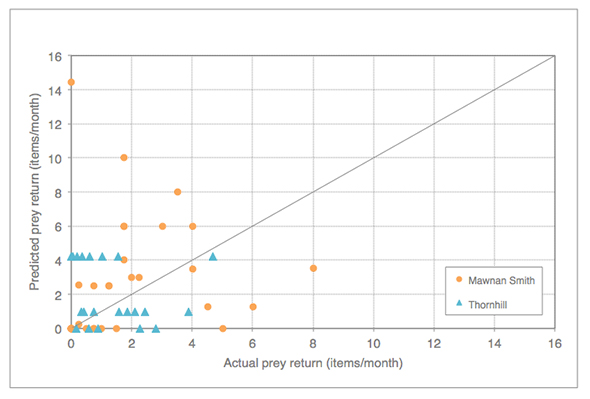 Five years later, when the study (“Reconciling actual and perceived rates of predation by domestic cats”) is published in Ecology and Evolution, the authors report that “cat owners were broadly aware whether their cat was predatory or not, but they were unable to perceive the magnitude of predation among predatory cats.” [1] An accompanying press release emphasized the point: “those with a predatory cat had little idea of how many prey items it typically caught.”

Well, yes and no.

Again, the majority (59 percent) overestimated predation levels, while only 41 percent underestimated. (And, as the graph illustrates, the difference between predicted and actual values tended to be greater for those overestimating predation—though in Thornhill the case is a little different.)

Given the way the results are described in both the paper and the press release, it’s easy to imagine how the mainstream media will interpret all of this. Never mind. There’s no need for imagination—consider some of these headlines:

•     “Cats may have nine lives but mice don’t, owners told” from The Telegraph (“Cat owners are in denial about the murderous impact their pets are having on wildlife, experts claim… owners had little understanding of the scale of the slaughter.”)
•     “Cat owners ‘in denial on killings’” from the Belfast Telegraph
•     “Are you in denial about how your cat is actually a murderous beast?” from the Irish Examiner

And then, last week, the New York Times jumped in—though with a much less provocative headline: “When the Cat Comes Back, With Prey.” But also this:

“If owners realized how much prey their pets killed, [lead author Jennifer L. McDonald] wondered, would they be willing to contain their cats to protect wildlife? She and her associates studied the question. The answer, published recently in the journal Ecology and Evolution was unequivocal and emphatic. No.”

Open for Discussion (or Not)

When I contacted McDonald last month, shortly after I saw the first media reports, she acknowledged that my reading of her results was correct, and explained: “as a life-long cat-owner myself I am especially focused on cat welfare and appreciate your concerns.”

And McDonald pointed out that she and her co-authors did “talk about both over- and under-estimation” in the Discussion section of their paper.**

Again: yes and no.

One possible explanation for the discrepancy between predicted and actual predation rates, suggest the authors, could be the ownership effect, “whereby overly favorable views of owned possessions are extended to pets. This could result in overestimation or underestimation of their cats’ predatory prowess, depending on each owner’s appraisal of what constitutes a favorable trait.” [1]

However, the bulk of this section of the paper is devoted to wildlife impacts—despite the authors’ acknowledgment that “there is little evidence that cats are affecting prey populations.” [1] (Indeed, “despite the large numbers of birds killed,” notes the Royal Society for the Protection of Birds notes on its website, “there is no scientific evidence that predation by cats in gardens is having any impact on bird populations UK-wide.”)

Even as I write this, I realize my objection to “Reconciling actual and perceived rates of predation by domestic cats” may sound like nitpicking (familiar territory for me, apparently). But because the study’s packaging—irresistible to a mainstream media addicted to clickbait—portrays cat owners as irresponsible and their cats as a menace, it’s easy to see how it will be used to fuel the witch-hunt against outdoor cats in general.

And all without the anybody providing sufficient evidence.

* I’ve read news stories suggesting that perhaps 90 percent of UK cat owners allow their cats outdoor access. Though I’ve been unable to locate any convincing data, it seems safe to use the term most here.

** I reasserted my original point in a follow-up e-mail to McDonald, including links to some of the same media stories I’ve included here. Unfortunately, she didn’t respond.

In the News, Threats to Wildlife