Twenty months into this blog, I’ve encountered my share of yellow journalism infecting both small-town weeklies and, with surprisingly regularity, major dailies. Indeed, in one of my first posts, I referred to an L.A. Times piece in which Steve Holmer, senior policy advisor for the American Bird Conservancy, told the paper (one assumes, with a straight face) that there are 160 million feral cats in the U.S. (based, he claimed, on “the latest estimates,” which, as it turned out, originated with former Smithsonian researcher Nico Dauphine).

A year later, Toronto Star reporters Mary Ormsby and Jim Wilkes filed a truly pathetic story portraying—clearly, without the burden of fact-checking—“bird advocates… up against a multi-million-dollar cat-care industry.” And over the summer, The Columbus Dispatch joined the chorus of publications pedaling the infamous University of Nebraska-Lincoln paper (not fit even for birdcage duty, that one) as if it were valid research.

And then there was Peter Marra’s (pr)op(aganda)-ed in The Washington Post.

The list goes on and on. All of which got me thinking… Inspired by my friend’s “birdcage liner” story, and by Nathan Winograd’s Phyllis Wright Awards (“given to those who epitomize everything that is wrong with our broken animal ‘shelter’ system”), I bring you the Trap Liner Award.

Just as some papers are best for lining birdcages, others are well-suited for lining the humane traps used for TNR work. Some, of course, are better (meaning worse) than others. The Trap Liner Award recognizes the writer or publication that, over the course of a given year, best demonstrates a tragic failure of journalistic integrity while fueling—intentionally or not—the witch-hunt against feral cats.

Competition in 2011—the first year of the Trap Liner Award—was fierce.

“Live and Let Kill,” Matt Smith’s feature for SF Weekly, looked to be a shoo-in, due largely to Smith’s poor choice of sources—among them, ABC and Travis Longcore—and “evidence” pulled from Jonathan Franzen’s most recent novel and Peter Marra’s catbird research (the reports of which themselves border on fiction). This from a publication that claims to be “San Francisco’s smartest.”

Three months later, however, another San Francisco publication—Mother Jones—raised (meaning, lowered) the bar with Kiera Butler’s “Faster, Pussycat! Kill! Kill!” As I mentioned in my July 1 post, the misinformation, misrepresentations, and missteps that make up the bulk of “Faster, Pussycat!” betray either willful ignorance or glaring bias. Or both.

(Of these, only Butler’s population estimate was later corrected in the online version of the story—where, at last check, there were 1,646 comments—and where, interestingly, the title was softened considerably to “Are Cats Bad for the Environment?”)

In the end, it was the combination of Butler’s sloppy journalism—combined with the magazine’s impressive circulation of 250,000 and the irony of all their chest-thumping about bullshit-busting and “smart, fearless journalism”—that clinched it for MoJo. 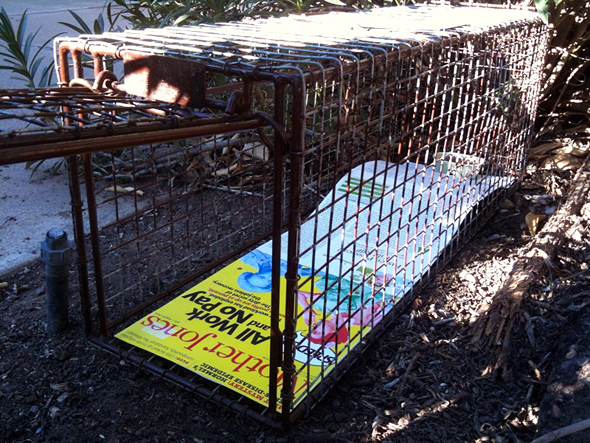 And so, the 2011 Trap Liner Award goes to Kiera Butler and Mother Jones.