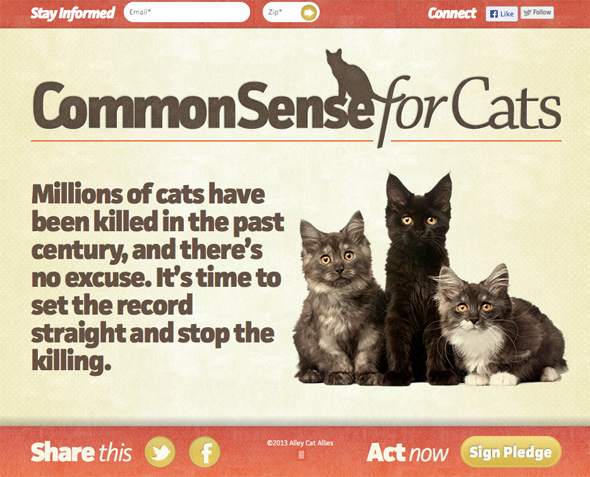 Have you seen the just-launched Common Sense for Cats website yet? It’s an Alley Cat Allies initiative that the organization describes as “an online resource to educate about outdoor cats and Trap-Neuter-Return, the only humane and effective program to stabilize—and reduce—outdoor cat populations.”

The site serves as a useful primer—courtesy of some very nice visuals—for those not already familiar with TNR and the larger “cat debate.” It’s easy to share via Facebook and Twitter, and there’s even a petition you can sign “to help ensure that humane policies for cats are a major take-home message for local policymakers across the country.” Signatures will be presented “at the upcoming meetings for the National Association of Counties, National League of Cities, and the United States Conference of Mayors to let them know that Americans want humane policies for cats in their communities.” (Just last week, Alley Cat Allies delivered more than 55,000 signatures to the Smithsonian Institution in response to the publication earlier this year of agenda-driven junk science produced by researchers at the Smithsonian Conservation Biology Institute.)