Once again, the American Bird Conservancy misrepresents the science in order to fuel TNR opposition. Ironically, ABC’s claim that “outdoor cats make up 13–45 percent of coyote diets” is refuted by the very studies cited in their recent media release. 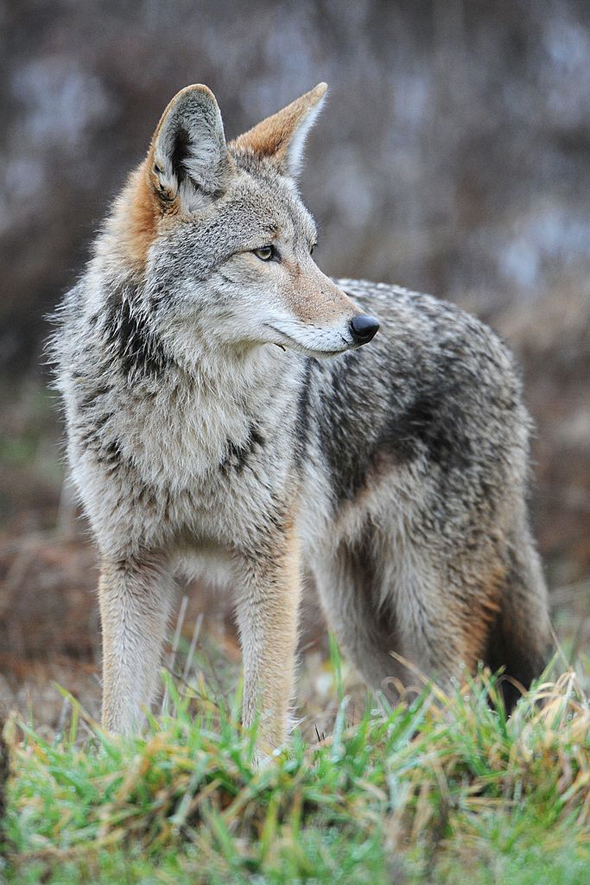 Late last month, a New York Times blog post reported that coyotes have made their way into Lower Manhattan. However unsettling the news may be to residents, some in the scientific community are praising the coyotes’ arrival.

“The growing presence of these top predators in New York City has piqued the interest of researchers, who say that coyotes in human territory might not be such a bad thing.”

Never ones to pass up an opportunity to misrepresent the threats both to and from free-roaming cats—there is, admittedly, a certain “efficiency” in playing both sides—the American Bird Conservancy issued a media release warning cat guardians to “think twice before letting their pet roam free outdoors.”

Which, to those unfamiliar with ABC’s long-running witch-hunt, might come across as actual concern. In fact, ABC cares about cats as much as they do science. Or professional ethics, for that matter.

Like its Cats Indoors! program, ABC’s latest bit of propaganda is little more than another Trojan Horse (doubly disguised with its British English) aimed squarely at TNR programs. In the words of Darin Schroeder, Vice President of Conservation Advocacy:

“Well-meaning but misguided cat lovers are creating unsafe conditions for domestic cats by releasing them back into areas where they may become prey for coyotes and other predators. Owners who let their pet cat out into their neighbourhoods may be unknowingly ringing the dinner bell to unseen coyotes. We urge states, cities, and communities to reject this inhumane approach to the feral cat problem and instead, require responsible care of pets and the removal of feral cats from the wild.”

Predation Studies
What caught my eye was not the u in neighbourhoods, but ABC’s claim that: “Studies show that outdoor cats make up 13–45 percent of coyote diets in those environments.”

Although ABC indicates otherwise, this was not an investigation into what coyotes eat. “Our objectives,” write the authors “were to describe the group size of coyotes involved in coyote–cat interactions, time and location of interactions, and outcomes of interactions.” [1] The whole point of the study was to find coyotes killing and/or eating cats—hardly representative of a “day in the life” of either species.

Here’s where it gets interesting, though.

I assume ABC’s “45 percent” was intended to be 42 percent—but that’s hardly worth mentioning in light of their far more egregious error. The real problem is that Grubbs and Krausman’s 42 percent figure actually tells us very little about coyotes’ dietary intake. In order to know what percentage of these coyotes’ diet is made up of domestic cats, the researchers would need to examine their stomach contents.

There are a number of ways to describe dietary intake—prey count being perhaps the easiest to understand. Often, though, researchers have available to them only stomach contents or scat, in which case results are typically expressed in either percent frequency of occurrence or percent by volume.

ABC has confused the two.

To appreciate the implications, consider a more familiar example: coffee consumption. According to the 2011 National Coffee Drinking Trends Study, “54 percent of adults age 25–39, said they drink coffee daily.” Were we to do a dietary study of this age group, then, we would expect to find coffee at a 54 percent frequency of occurrence.

To say that coffee makes up 54 percent of our dietary intake (either in terms of volume or, say, calories) on the other hand—essentially ABC’s interpretation—is obviously a gross exaggeration of true consumption levels.

A closer look at Grubbs and Krausman’s work reveals the same error, and—more broadly—the complexities involved in accurately assessing dietary intake in the field. Domestic cats, they argue, “have contributed ≤13.1 percent of the diet of coyotes (MacCracken 1982, Shargo 1988, Quinn 1997).” [1]

What exactly did these other researchers find?

Los Angeles Suburbs
Shargo analyzed 22 coyote scats collected “in a suburban residential neighborhood in Los Angeles from 1984 to 1987” and found domestic cats at a 13.6 percent frequency of occurrence. [2] Which, as I’ve explained, should not be confused with percent of dietary intake.

Among the other items tabulated: plant material: 81.8 percent; rodents: 45.5; garbage 40.9; mule deer 9.1; small birds 4.5. (The numbers are telling in that they add up to well over 100—this is to be expected when findings are expressed as percent frequency of occurrence. If, as ABC suggests, domestic cats make up as much as 45 percent of coyotes’ diet, then where are they putting all the plant material, rodents, and garbage?)

Although Shargo’s “study was not intended to analyze coyote diet in great detail,” he found that 13.6 figure worthy of comment: “Domestic pets, notably cats, are quite commonly eaten.” [2]

(An article in the current issue of The Wildlife Professional (PDF)—to which ABC refers in their media release—suggests that preventing coyote attacks on humans “might mean removing all exterior food sources such as trash, bird feeders, free-roaming cats, or tethered dogs.” [3] Shargo’s work suggests that rodents may be a far more attractive “food source”—one that would be available in even greater abundance were ABC to get their way and remove all free-roaming cats from the environment.)

Western Washington
Quinn “collected a total of 1,435 coyote scats from [three different] habitat types (735 from residential, 449 from mixed agricultural, and 251 from mixed forest)” in western Washington during his dissertation fieldwork in 1989 and 1990.

“Fruits and mammals were the largest classes of food item in all habitat types and their seasonal use was similar among habitats. Apple and cherry were the most abundant fruits in the scats, and ranged from 22–41 percent and 9–13 percent of the annual diet, respectively. Vole was the most abundant mammalian food item (41.7 percent) of coyotes in mixed agricultural-residential habitat while house cat and squirrel were the two most abundant mammalian food items (13.1 and 7.8 percent, respectively) of coyotes in residential habitat.” [4]

El Cajon, CA
Examining 97 coyote scats collected in El Cajon, CA, during 1978, MacCracken found domestic cats made up 2.3 percent by volume (though, inexplicably, his own paper suggests otherwise, that his figures represent “percent frequency of occurrence of items recovered”).

Overall, mammals accounted for 28.9 percent, birds 15.9 percent, and vegetation 38.5 percent by volume. “Miscellaneous items such as pieces from chicken egg shells, cellophane wrappers, pieces of cloth, string, plastic, and paper accounted for 16.7 percent of the remains in the scats examined.” [5]

All of which adds up to what, exactly? It’s difficult to say.

Even the most precise scat analysis provides an incomplete picture. “The ability of scat analysis to determine food habits undoubtedly varies by species and circumstances,” argues Bart O’Gara. “Scat analyses should be verified by at least limited stomach analyses so the stomach data can serve as a way to ‘calibrate’ results inferred from scats.” [6]

And this isn’t the first time ABC’s done this.

According to their brochure, Domestic Cat Predation on Birds and Other Wildlife (PDF), “extensive studies of the feeding habits of domestic, free-roaming cats… show that approximately… 20 to 30 percent [of their diet] are birds.”

Ellen Perry Berkeley carefully examined—and debunked—this claim in her 2004 book, TNR Past Present and Future: A history of the trap-neuter-return movement, pointing out that ABC’s figure (among its many flaws) is actually based largely on a misreading and/or misrepresentation of Mike Fitzgerald’s considerable research into the dietary habits of cats. Like Shargo, Fitzgerald reported results as percent frequency of occurrence. ABC’s “interpretation,” suggests Fitzgerald in his communication with Berkeley, likely overstates predation by a factor of two or three. [7]

And yet, the error persists even after ABC revised Domestic Cat Predation on Birds and Other Wildlife last year.

So, it’s not difficult to imagine their 13–45 percent of coyote diets claim becoming an equally persistent error in a future ABC brochure—especially in light of the press coverage it’s receiving. (See, for example, the San Francisco Chronicle’s politics blog and Salt Lake City’s KSL TV.)

All of which begs the question: Are such misrepresentations intentional, or do they suggest an inability to accurately interpret the relevant research?

Does it really matter? Neither answer paints ABC—an organization that claims repeatedly to base its policy recommendations on “the best available science”—in a flattering light.

To be clear: coyotes do pose a threat to outdoor cats.

Over the course of 790 hours, Grubbs and Krausman observed eight coyotes kill 19 cats, mostly in residential areas. And, in an often-cited study conducted in the San Diego area, researchers found that “25 percent of radio-collared [pet] cats were killed by coyotes.” [8]

In her outstanding paper on the subject (PDF), Judith Webster addresses this issue in great detail, and, in a comment anticipating ABC’s recent media release by five years, argues:

“One cannot address the issue of urban coyotes without talking about cats and songbirds. For many environmentalists, the killing of cats by coyotes is not the collateral damage of laissez-faire management, but a desired result.” [9]

In their latest media release, ABC puts a new twist on this—grossly exaggerating the killing of cats by coyotes to achieve their own desired result: the kind of press coverage that advances their anti-TNR agenda. And, not to put too fine a point on it, attracts donations.