In Citizen Canine, which I blogged about a couple weeks ago, author David Grimm, “trace[s] the evolution of dogs and cats from wild animals to quasi-citizens.” [1] As Grimm explains, the first of the book’s three sections, Family, “uncovers how pets became our virtual children, trekking the long—and often tortuous—path from feral animal to family member.” [1]

For some, however, that path has apparently been too easy, the trek too quick. Or perhaps it’s the destination to which they truly object. Witness, for example, the American Bird Conservancy’s recently revised Cats Indoors Brochure (PDF). 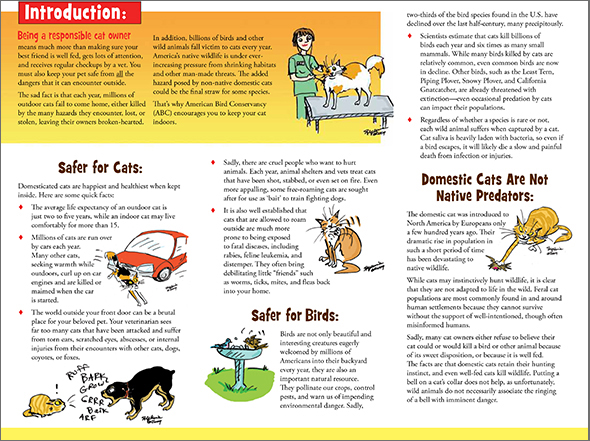 Comparing the 2014 version to the previous (undated) version reveals remarkably few differences. (Then again, why mess with success? This is, after all, ABC’s “most popular item.”)

There are two references to the 2013 Smithsonian/U.S. Fish and Wildlife Service paper, which, despite its numerous glaring flaws, ABC continues to promote as valid research. No surprise there. 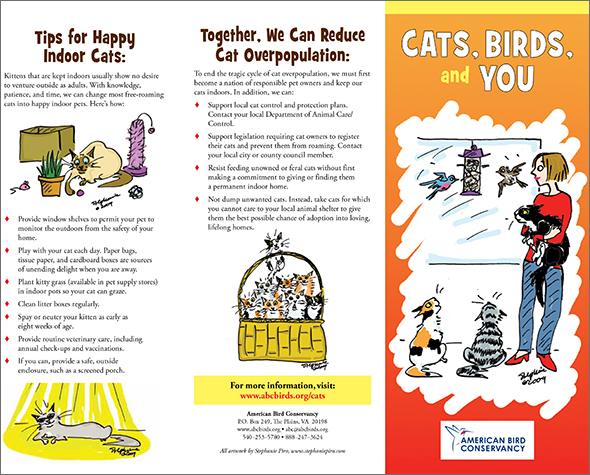 I was, however, a little taken aback to see, as part of their advice regarding responsible pet ownership: “You must also keep your pet safe from all the dangers that it can encounter outside.”

See, in the previous version of ABC’s brochure, “your pet” was referred to not as it, but as she.

This is more than a matter of semantics, of course. Despite the obvious futility of their attempt to stuff the genie back into the bottle, reverting to such language makes it that much easier for ABC to justify their call for lethal roundups—as the organization’s long-time president George Fenwick did last year in the Baltimore Sun.

We’re not killing him or her, the thinking goes; we’re euthanizing it.

Well, when you have neither science nor public opinion on your side, I suppose you’ll try just about anything.