Considering I’ve never donated one cent to the American Bird Conservancy, the organization has been very generous to me—at least in terms of blog content, courtesy of the various misrepresentations, red herrings, and outright lies used to rationalize and promote their ongoing witch-hunt against outdoor cats.

The latest example (there are so many, it’s all I can do to keep up anymore) was actually brought to my attention (unintentionally) by an organization using (without acknowledging the fact) ABC’s standard talking points. “One long-term TNR study,” it was explained in a letter to elected officials, “concluded that TNR was a waste of ‘money, time, and energy.’”

As the accompanying citation indicated, the quote was taken from a 2006 paper published in Preventive Veterinary Medicine. It was also taken, I knew, out of context.

ABC’s been doing this kind of thing for years now—as I say, there’s no lack of material to blog about. But versions of this particular quote seem to be in heavy rotation recently—late last year, for example, in a letter (PDF) to Albuquerque Mayor Richard J. Berry opposing the city’s community cat program: “One long-term study of TNR efforts in Rome concluded that TNR was a waste of “money, time, and energy.’”

A few months later, in a January 28 press release, the quote was revised slightly: “One long-term study of TNR concluded that TNR alone was a waste of ‘money, time, and energy’” (emphasis mine).

Interestingly, on that same day, ABC (with several other organizations as signatories) issued a letter (PDF) to Department of Interior Secretary Sally Jewell, urging “swift action to address the threat to wildlife populations and human health posed by feral cats.” This time, though, the word alone was omitted, presumably for greater effect: “One long-term study of TNR in Rome, Italy, went so far as to call TNR a ‘waste of money, time, and energy.’” 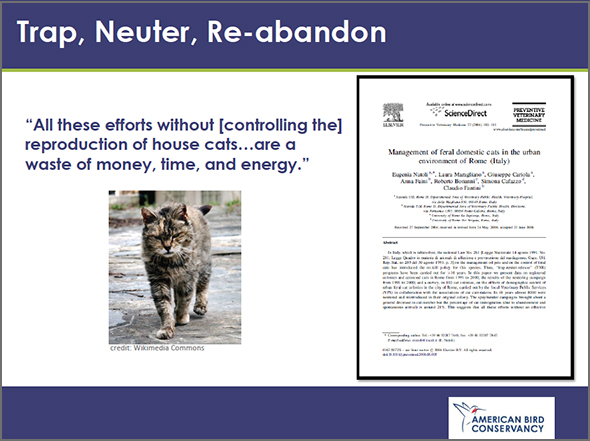 The most creative interpretation by far, though, is from Grant Sizemore, Cats Indoors program officer for ABC, included in his 2013 presentation Cats, Birds, and People: The Consequences of Outdoor Cats and the Need for Effective Management (PDF). Among the “numerous scientific studies demonstrate[ing] that TNR fails” is this reference to that 2006 paper: “All these efforts without [controlling the] reproduction of house cats… are a waste of money, time and energy.”

Here’s an excerpt from the paper’s abstract—which, by the way, is available for anybody to read online.

“In 10 years almost 8,000 [cats] were neutered and reintroduced in their original colony. The spay/neuter campaigns brought about a general decrease in cat number but the percentage of cat immigration (due to abandonment and spontaneous arrival) is around 21%. This suggests that all these efforts without an effective education of people to control the reproduction of house cats (as a prevention for abandonment) are a waste of money, time and energy.” [1]

Not really the same thing, is it?

Setting aside for the moment the rather remarkable results of the sterilization efforts—“colonies neutered 3, 4, 5 or 6 years before the survey showed progressive decreases of 16, 29, 28 and 32 percent, respectively” [1] despite the 21% rate of “cat immigration”—and the fact that ABC has, for 17 years now, had nothing to offer whatsoever in the way of a viable alternative, the extent to which Sizemore has butchered the quote to further ABC’s agenda is truly striking.

Now, I’ll be the first to say that the paper’s authors could have made their point differently. Indeed, years ago, I contacted lead author Eugenia Natoli to confirm that these very words did not perhaps reflect something lost (or added) in translation from Italian to English. She expressed no regret, however, and made no attempt to clarify or revise them.

Nevertheless, the rather dismissive tone in the abstract stands in stark contrast to the authors’ conclusions, which read, in part:

“TNR programs alone are not sufficient for managing urban feral-cat demography, and we suggest that they be matched with an effective educational campaign directed to citizens to reduce the high risk of owned-cat abandonment.” [1]

At the risk of pointing out the obvious, though, the absence of TNR in Rome—which, after all, is what ABC wants in the U.S.—would have resulted in population increases across virtually all colonies, rather than the decreases described above.

In any case, I can’t think of any TNR program that is not, in some way or another, connected to education and outreach efforts aimed at cat owners. Whether it’s large-scale, comprehensive community cat programs that include door-to-canvassing, or small operations comprised mostly of weekend clinics, all of the TNR programs of which I’m aware place a great emphasis on educating the public about the importance of sterilizing pets.

Which, I suppose, explains why Sizemore and ABC feel so compelled to misquote Natoli et al.: the actual quote simply doesn’t do them much good as-is.

In the News, Public Relations