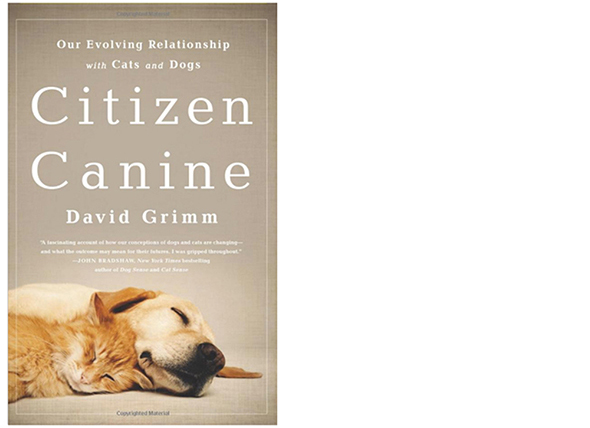 You know what they say about judging a book by its cover. Well, don’t be fooled by the title of Citizen Canine—as its subtitle indicates, this book is about “our evolving relationship” with both dogs and cats. Using a combination of rigorous research and on-the-ground reporting, author (and online news editor of Science) David Grimm traces the journey of cats and dogs from domestication (such as it is, in the case of cats) through beloved family pet and into the present-day movement toward personhood.

All of which makes for very compelling reading, even for those of us who work in animal welfare and are therefore familiar with most of the material. For other readers—and I hope there are many—Citizen Canine will likely be their introduction to contemporary hot-button animal welfare issues such as breed-discriminatory laws and TNR. And even the “insiders” among us might be surprised to learn, for example, of dogs with attorneys and the details of the Uniform Trust Code, which allows people (in some states) to include their pets (and perhaps their colony cats, too—I don’t know) in their wills.

Plenty of good stuff for all of us, in other words.

Unfortunately, it doesn’t look like David’s book tour will make it to Phoenix (and I missed him in L.A. last month!). I was, however, lucky enough to get a few minutes with him recently via e-mail, and asked him a few questions about his book.

PW: As you point out in Citizen Canine, cats in Medieval Europe faced horrific cruelty. And then again (for different reasons) during the Victorian era. What do you think it is about cats (far more so than dogs) that elicits such visceral reactions to their mere presence?

DG: I think cats tend to be easier to denigrate than dogs. They often don’t solicit our affections or obey us as much as dogs do, and that makes it easier to dismiss them as wild animals—and to treat them that way. A lot of people also have misconceptions about cats—that they’re dangerous, “evil,” or carry diseases—that they don’t necessarily have about dogs. Cats did have a lofty status in Ancient Egypt—indeed, some historians credit them with allowing that civilization to thrive (by killing rodents, scorpions, snakes, etc.)—so it’s not really until the Middle Ages (when cats were linked to Satan and blamed for spreading the plague) that cats get saddled with a lot of the baggage they still have today.

PW: What role (if any) do you see this historical baggage playing in the way unowned, free-roaming (or “community”) cats are viewed by some people even today?

DG: I think free-roaming cats are saddled with a lot more baggage than housecats. A lot of this has to do with the fact that people are more likely to view free-roaming cats as wild animals, and that makes it easier to deny them the qualities we often ascribe to housecats (such as intelligence, the ability to suffer, etc.). This explains why you have things like hunters wanting to create an open season on feral cats in Wisconsin, or the federal government classifying feral cats as “vermin” in its shipyard ordinances.

PW: We often lament the fact that cats are considered property in the eyes of the law. Can you talk a bit about how this is changing? What affect (positive or negative) do you think this change will have on community cats?

DG: Cats and dogs have only been legally considered property in the U.S. for about a century. Before that, they were deemed so legally worthless that they weren’t even property—they could be stolen and killed without repercussion. This changed as people began to consider these animals more like family. Today, both cats and dogs are legal property—and I argue in my book that they are the most valuable animals in the country. Yet 90 percent of owners consider their pets family members, so the legal definition of “property”—which essentially means a pet is no different than a couch or a toaster—is out of step with public opinion.

At the same time, elevating dogs and cats out of the property status (which, as I argue in my book, has already begun to happen with things like pets being able to inherit money, pets being the subject of custody cases, and even pets being put on trial) creates a lot of complications. Owners who are now “guardians” could be forced to educate and provide medical care for their pets, just like we must for our human children, and some critics worry that legal “personhood” for pets could spill over to other animals, like livestock and laboratory animals.

PW: In researching your book, you spent a lot of time with Lisa Tudor, founder of the Foundation Against Companion-Animal Euthanasia (FACE) and IndyFeral (and one of my favorite people in animal welfare). What did you find most intriguing or surprising about the “world” of TNR/community cats?

DG: I was surprised by the passion of the TNR volunteers and the obstacles they had to overcome to do their jobs. This didn’t just include trying to win over skeptical (and sometimes hostile) neighbors, but also battling local governments so that they could continue to do their work without being fined. As Lisa Tudor puts it, those governments that make it illegal to feed and care for feral cats are “criminalizing compassion.”

PW: Anything I missed that you’d like to discuss?

DG: I think it’s important for people to realize that even though cats and dogs are the most valued and legally protected animals in the country, we’re still euthanizing more than three million of them every year in U.S. shelters. I hope someday that we can get that number down to zero.