Less than 24 hours after Superstorm Sandy made landfall near Atlantic City, NJ, reports of the community’s famous “Boardwalk Cats” were already coming in. And so far, it’s been mostly good news. “Chalk up another win for the cats, TNR and, in this case, Alley Cat Allies,” wrote Francis Battista, co-founder of Best Friends Animal Society, in a story posted yesterday on the Best Friends Blog. ACA “not only took on the Atlantic City cats as a model program, but are the folks responsible for establishing best practices for TNR and who continue to be effective advocates for community cats everywhere.” 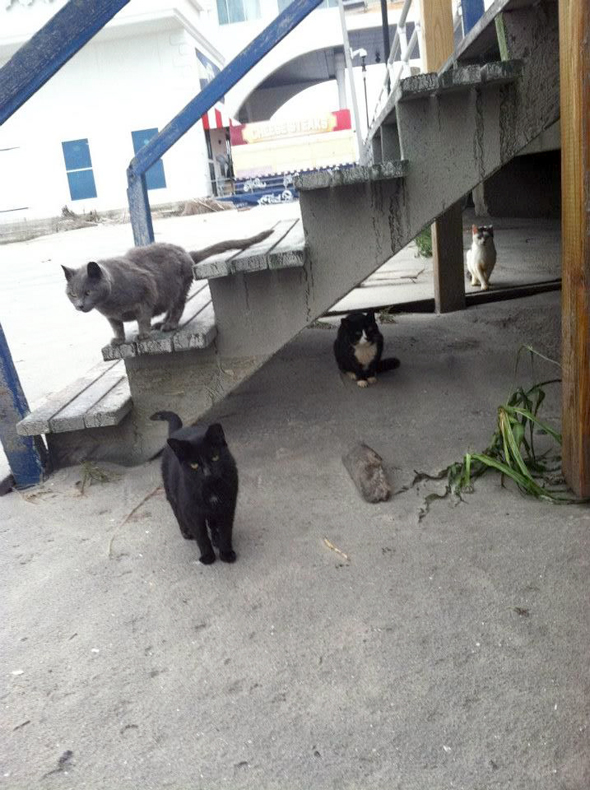 On Tuesday, Alley Cat Allies posted a story on their website announcing: “our program manager in Atlantic City reported seeing cats returning to their colonies along the Boardwalk.”

“It’s extremely encouraging to see cats coming back already after such a serious storm. Access to the most damaged part of the Boardwalk is still hampered by road closures, but we’ll continue to provide updates as the floodwaters recede and we’re able to conduct a full assessment.”

That same day, Melissa Block, co-host of NPR’s All Things Considered, checked in with 63-year-old caretaker Frank Hoops, who’s lived in the city his whole life.

“Mr. Hoops… was taking care of some feral cats that live under the boardwalk. He was concerned about them. He had come to see them, and he said they survived the storm just fine.

In fact, in the eye—when the eye of the storm passed over Atlantic City, apparently, according to one of the security guards at a casino, 25 cats were walking single file down the boardwalk looking just fine. And he said the cats he looks after—Pepper, Pewee—they’re all fine.”

Yesterday, an update was posted on the ACA website:

“Along the Boardwalk, where more than 100 feral cats have been living in managed colonies for 13 years, the powerful ocean dragged the cats’ tide-tattered shelters out onto the beach, scattering them around like seashells. The destruction is nothing short of catastrophic.

Despite the devastation, we are very pleased that our program manager in Atlantic City continues to report seeing cats returning to their colonies along the Boardwalk. Often cats will stay away from an area for a few days to a few weeks until they know things are back to normal, so the fact that we have seen almost half of the Boardwalk cats is a sure sign of their resilience. Most of the cats appear healthy and have good appetites, despite their being a bit soggy…

We have deployed our Disaster Response Team to the area to help with clean-up and rebuilding. If you live in or near Atlantic City and want to help, please email us. We also want to hear from people in other areas of the country who were affected by the storm or who are offering assistance to those in need. We know that caregivers and rescuers all along the East Coast have been affected by Hurricane Sandy, and are perhaps without power or a way to get back to their homes or colonies. We are committed to making sure that they have the support and resources they need. Please contact us at info@alleycat.org or 240-482-1980, ext. 330.”

[Note: As will all forms of disaster relief, this effort requires a great deal of coordination. It’s important, therefore, that volunteers interested in helping call or e-mail ACA—and await a response—rather than traveling directly to the boardwalk.]

Later in the day, e-mails issued by ACA reported that “about 15 of the 25 cats who live near the Taj Mahal casino have been spotted,” and that “two cats who needed a little extra TLC” were receiving veterinary care and would be looked after by ACA’s local team “until they are ready to return to their home.”