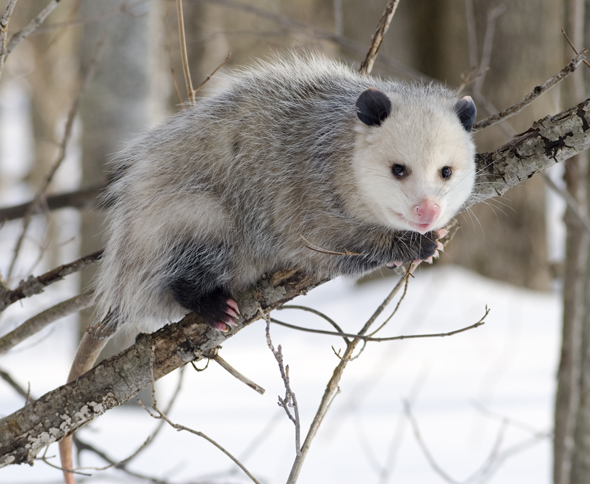 “The most remarkable finding of our study,” notes co-author Dr. Michael E. Grigg in a press release from the National Institutes of Health “was the exacerbating role that [Sarcocystis] neurona appears to play in causing more severe disease symptoms in those animals that are also infected with T. gondii.” What I found most remarkable, though, was the straightforward relationship between infections in land mammals and infected marine mammals implied in Grigg’s comments:

“Identifying the threads that connect these parasites from wild and domestic land animals to marine mammals helps us to see ways that those threads might be cut… by, for example, managing feral cat and opossum populations, reducing run-off from urban areas near the coast, monitoring water quality and controlling erosion to prevent parasites from entering the marine food chain.”

The Wildlife Society’s Michael Hutchins used the opportunity to once again call for the “control” of feral cats, which, he argues are “a menace to our native wildlife.” According to Hutchins, the study by Grigg (who serves as Chief of the National Institute of Allergy and Infectious Diseases’ Molecular Parasitology Unit) and his colleagues “is yet another demonstration that Trap-Neuter-Release (TNR) management of feral house cats must be stopped if we value our native wildlife.”

But, of course, the threads that make up the ecological “fabric” are interwoven with many others. Cut even one of them, as Grigg suggests, and the whole thing can begin to unravel.

Toxoplasma gondii
Cats pass the mature, infective form of T. gondii in their feces—a process called “shedding oocysts.” T. gondii infection, or toxoplasmosis, in humans can be traced to “ingestion of oocyst-contaminated soil and water, from tissue cysts in undercooked meat, by transplantation, blood transfusion, laboratory accidents, or congenitally.” [1]

Numerous studies have suggested a link between toxoplasmosis in marine life and freshwater run-off. In contrast to the “stress placed on the importance of the cat in the scientific literature,” [2] however, several studies have challenged the importance of environmental contamination in the transmission of T. gondii.

In the Absence of Cats
Researchers at the University of Salford’s Centre for Parasitology and Disease Research, for instance, observed high levels (e.g., 75 percent) of congenital transmission of T. gondii in a “wild population of mice,” leading them to conclude “that this phenomenon might be more widespread than previously thought.” [2] Another team of researchers from the same lab, citing studies of T. gondii infections in sheep, also make a compelling argument that congenital transmission “may be more important than previously considered.” [3]

And then there are the studies in the Arctic.

“…T. gondii most likely is brought to Svalbard by migratory birds that become infected in temperate agricultural areas in the winter. However, marine sources of infection may exist. The high seroprevalence of T. gondii in the arctic fox population on Svalbard may be due to: (1) infection from migratory bird species through predation; (2) vertical transmission; and (3) tissue cyst transmission within the Svalbard ecosystem through scavenging and cannibalism. Together, these transmission routes cause a surprisingly high seroprevalence of T. gondii in a top predator living in an ecosystem with very few cats.” [4]

A study of polar bears provides further evidence: “It would… be inconceivable to assume that the few cats would play a major role in the epidemiology of T. gondii in the vast high Arctic. This is apparently the case in East Greenland as well.” [5]

Ticks and Tick-bites
In a paper published in 2009, Polish researchers proposed yet another possibility. The “high incidence of T. gondii found, among others, in free-living ruminants,” write Sroka et al., “suggests a possibility of other, so far unknown, paths of transmission of this protozoan.”

“Due to the fact that they are widespread, and tick-bites occur frequently both in humans and in animals, ticks might play an important role in toxoplasmosis transmission.” [6]

Sarcocystis neurona and Opossums
The links between opossums and S. neurona infections, too, are not quite as straightforward as Grigg’s comment suggests. Researchers were surprised to find S. neurona in central Wyoming, for example—“outside the known range of the opossum.” [7]

Their findings, write Dubey et al., “suggest that another definitive host may be involved or that the parasite shares antigens with another protozoan.” [7]

Conspicuously Absent
Grigg and his colleagues make no reference to these studies, nor do they acknowledge the alternative transmission routes suggested therein. To be clear, though, the paper focuses mostly on infection rates; it’s the press release that refers to cats and opossums as the ultimate source of infection.

(If all of this sounds familiar, it may be because I referred to many of the same studies in my response last month to a press release about a study of T. gondii-infected mammals in a “natural area in central Illinois” by Shannon Fredebaugh and Nohra Mateus-Pinilla.)

But if environmental contamination plays such a critical role, shouldn’t that be reflected in higher infection rates inland (nearer, presumably, to greater concentrations of contaminated soil)? 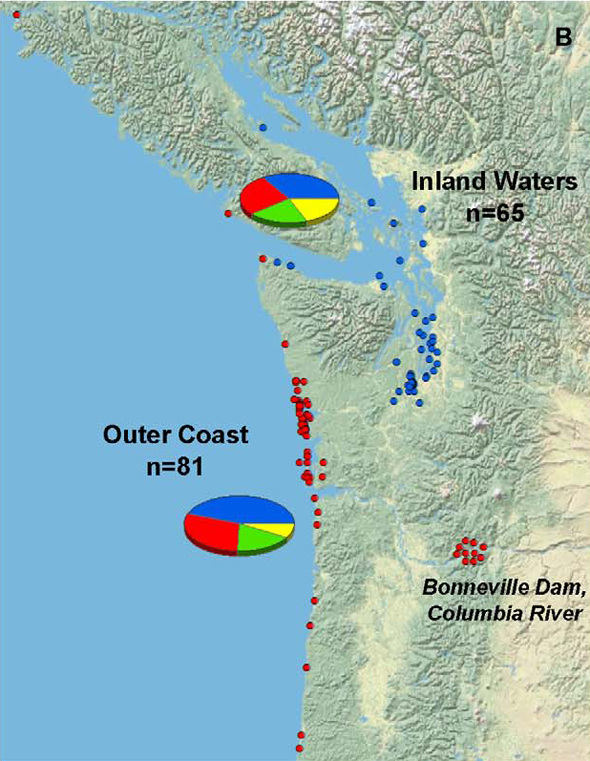 Perhaps the most puzzling of their findings, though, is this: “T. gondii infections peaked in 2007 then declined relative to S. neurona” (as illustrated in the bar chart below).

Again, if environmental contamination is the culprit, does this mean that the population of free-roaming cats in the area also peaked around 2007? Could this, in fact, be empirical evidence of the positive impact of TNR? (At last, something for Hutchins to blog about!) 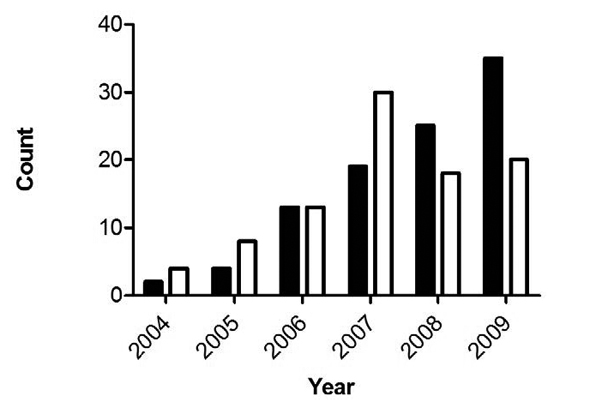 Obviously, there’s not enough evidence here to make that leap. Still, the data challenge assertions by the American Bird Conservancy that the feral cat population continues to rise—as well as the conventional wisdom about the presumed cause of T. Gondii-infected marine mammals, articulated most recently by David Jessup and Melissa Miller: “the science points to cats.” [8]

And finally, let’s say we were able to remove all of the cats and opossums from the environment. Setting aside for the moment the numerous hurdles (e.g., ethical, economic, etc.) involved, what impact could we expect in terms of T. gondii and/or S. neurona infections in marine mammals? Or in rodents, whose populations would surely skyrocket?

I’m skeptical that the benefits would be all that great. Skeptical, too, that we could predict with much accuracy the actual outcomes (to say nothing of the unintended consequences).

As for what Grigg thinks, he’s yet to respond to my e-mail inquiries on the subject.

6. Sroka, J., Szymańska, J., and Wójcik-Fatla, A., “The occurrence of Toxoplasma gondii and Borrelia burgdorferi sensu lato in Ixodes ricinus ticks from eastern Poland with the use of PCR.” Annals of Agricultural and Environmental Medicine. 2009. 16(2): p. 313–319.