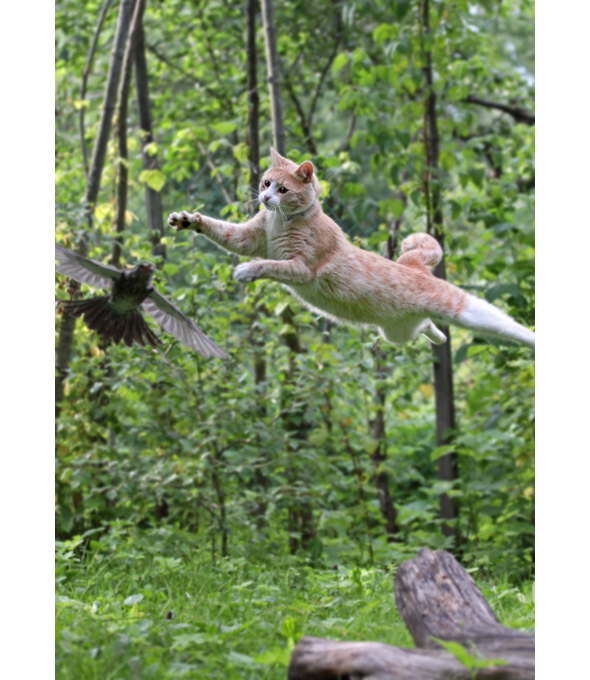 Using Google to translate the page’s contents, it seems this bird—despite “mock[ing] the cat and with loud cries of diving at him from the branches of acacia”—was yet another one that got away.

In the third edition of his massive book Ornithology—“the classic text for the undergraduate ornithology course,” according to the description on Amazon.com—Frank Gill writes:

“Natural predators are a major source of annual mortality among birds, especially nestlings, incubating females, and young birds in their first year. Relentless predation is a driving force of natural selection for escape behaviors, camouflage plumage, and social behavior. With some conspicuous exceptions, however, predators don’t limit or regulate the bird populations on which they prey [1]. Instead, they take weak, sick, and young birds, many of which are part of the surplus that exceeds locally limiting food supplies.” [2, p 545]

For Gill, it seems, it’s all very straightforward; this, after all, is how Nature works. (It should be noted that, just one paragraph later, the author makes a clear distinction between islands and other habitats: “The endangerment and extinction of island birds by introduced predators is a conspicuous exception to the statement that predators don’t limit bird populations.”)

Unequal Treatment Under the (Natural) Law
Nobody opposed to TNR would deny that cats are predators—so why won’t they admit that the birds and other wildlife killed by cats are generally among, as Gill puts it, the “weak, sick, and young”?

“Songbirds are part of the food chain just like other animals and their predators are going to look for the easiest targets. The birds that hawks are usually able to catch at feeders are the slow and sick ones. The strong and healthy ones escape, allowing their survival to produce more healthy babies.”

Cats, however, are a different matter altogether. According to the Carolina Raptor Center, they “kill a lot more birds then hawks do because hawks only kill for food, where cats kill for the sport of it.” I’ve never seen any scientific evidence to support such a claim, which may explain why so many have instead argued—again, without any support—that cats compete with raptors for food.

Who’s Crazed Now?
It wasn’t Gill’s book that got me thinking about this, though, but a comment posted last month on the Bountiful Films blog, following the release of their documentary Cat Crazed.

After listening to a CBC interview with director Maureen Palmer, whose “science” was clearly coming straight from the American Bird Conservancy, I posted a comment, stating in part:

“What you won’t find [from organizations opposing TNR] is any mention of the studies that show rather convincingly that birds killed by cats tend to be unhealthy compared to those killed by building collisions, say. Even high predation rates do not equate to population declines—as many scientists have noted.”

I also included a link to my “Predatory Blending” post. Which promptly drew fire from somebody calling him/herself “Catbird”:

“Where cats cause documented extinctions and extirpations, cat predation is additive (e.g., Hawkins 1998, Crooks and Soule 1999, Nogales et al. 2004). Researchers are interested in knowing if some cat predation is compensatory (that is, killing animals that would die anyway) (Beckerman et al. 2007, Baker et al. 2008, van Heezik et al. 2010). The purported evidence of compensatory predation is a study showing that cat-killed birds have smaller spleens (indicating that they are less healthy) than birds killed by other sources (e.g., windows) (Moller and Erritzoe 2000). Other researchers found that birds killed by cats had less fat reserves and lower muscle mass than those killed in collisions (Baker et al. 2008), but warned against assuming that this corresponded with lower fitness of these individuals. In neither instance is it possible to conclude that individuals killed by cats would have died otherwise.”

Actually, Møller & Erritzoe don’t suggest that the birds captured by cats “would have died otherwise.” But, they are quite clear about the implications of their research:

“The present study has suggested that predators like the domestic cat may select against individuals with a weak immune system, leaving a disproportionate fraction of immunocompetent individuals as survivors.” [3]

What Møller & Erritzoe observed is very much in line with what Gill describes as typical predatory behavior.

Still, though, I’m not necessarily surprised with Catbird’s “interpretation” of the science, given his/her comments and tone elsewhere in the discussion. What’s far more troubling is that so few studies on the predatory habits of cats address the topic in any meaningful way.

Sins of Omission
Take that 2008 study by Baker et al., for example. The authors are, just as Catbird suggests, quite cautious about their findings:

“The distinction between compensatory and additive mortality does, however, become increasingly redundant as the number of birds killed in a given area increases: where large numbers of prey are killed, predators would probably be killing a combination of individuals with poor and good long-term survival chances. The predation rates estimated in this study would suggest that this was likely to have been the case for some species on some sites.” [4]

But, as I’ve pointed out previously, the authors’ predation rates are inflated—in part due to their unquestioning application of the dubious multiplier proposed by Kays and DeWan. [5] Baker et al. also use low estimates of breeding density—all of which combines to diminish the apparent level of compensatory predation. Were these estimates adjusted to better reflect the conditions at the site, the “redundancy” the authors refer to would be reduced considerably.

(Frankly, Baker and his colleagues seemed quite eager to demonstrate that Bristol’s cats were negatively affecting bird populations; in an earlier study, they suggested—based, I would argue, on insufficient information—that the area might be a “dispersal sink for more productive neighboring areas.” [6])

On the other hand, at least Baker et al. acknowledge Møller and Erritzoe’s work. Many other studies don’t even go that far.

Coleman and Temple, [7] for example, failed to consider the role of compensatory predation—despite the fact that they cite sources/studies that do. [8–10] And Temple himself addresses this very topic in his 1987 paper Do Predators Always Capture Substandard Individuals Disproportionately From Prey Populations?

Using a trained Red-tailed hawk to prey on eastern chipmunks, cottontail rabbits, and gray squirrels, Temple developed the “proposition that substandard individuals are captured disproportionately when the type of prey is relatively difficult to capture but not when it is relatively easy to capture.” [11]

Which seems a very fitting description for the general case of a cat attempting to capture an adult bird. (Ground-nesting and ground-feeding birds would likely be easier prey, though Hawkins’ PhD dissertation work [12] suggests that even this assumption deserves careful scrutiny.)

Longcore et al. never mention Møller and Erritzoe (one of many shortcomings I address in “Reassessment”); neither do Dauphine and Cooper. [13]

And ABC doesn’t go near the topic of compensatory predation. (Ironic since, unlike cats, most of the “threats to birds” listed by ABC (e.g., pesticides, pollution, oil spills, collisions with towers, buildings, wind turbines, and power lines, etc.) are clearly nondiscriminatory in terms of bird mortality.)

Is it any wonder that a reasonable discussion about the impacts of free-roaming cats on wildlife is so elusive? The same stakeholders that condemn these cats for their predatory nature too often refuse to acknowledge the nature of predation itself.

13. Dauphine, N. and Cooper, R.J., Impacts of Free-ranging Domestic Cats (Felis catus) on birds in the United States: A review of recent research with conservation and management recommendations, in Fourth International Partners in Flight Conference: Tundra to Tropics. 2009. p. 205–219. http://www.pwrc.usgs.gov/pif/pubs/McAllenProc/articles/PIF09_Anthropogenic%20Impacts/Dauphine_1_PIF09.pdf

Cats and Birds, Threats to Wildlife