As I dig deeper into “Feral Cats and Their Management,” I continue to undercover discrepancies between the story Hildreth, Vantassel, and Hygnstrom are telling and what’s actually in the literature.

As I pointed out in my first post on the topic, Olof Liberg did not differentiate between native and non-native prey, as Hildreth, Vantassel, and Hygnstrom suggest. In fact, his reference to “natural prey” [1] was only to distinguish between food provided by humans and any wildlife that cats might consume.

While revisiting Liberg’s paper, though, I found something far more intriguing: it appears Hildreth, Vantassel, and Hygnstrom never made it past the abstract.

In their report, the authors write: “The diets of well-fed house-based cats in Sweden consisted of 15 percent to 90 percent native prey, depending on availability.” [2] But what Liberg is describing here is merely the range of prey brought in by all of the cats in the study, 80–85 percent of which were “well-fed house-based” (the others feral). 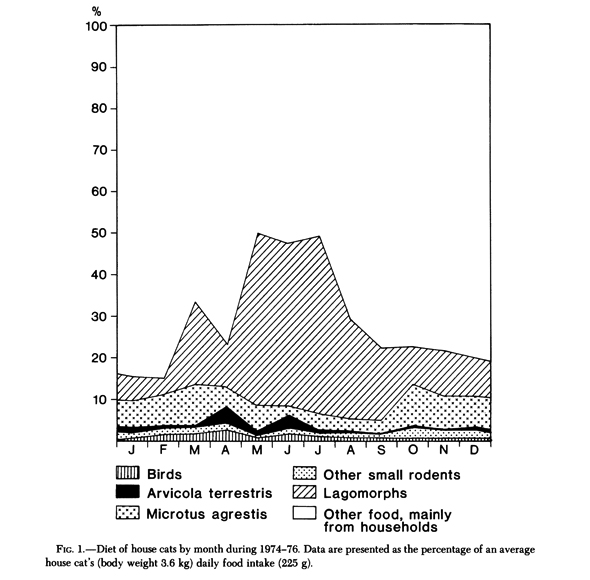 Moving beyond the abstract, however, the story gets even better. Averaged annually, wildlife makes up just 25–30 percent of the diet of the owned cats (see Fig. 1). Rabbits, being abundant in the area, make up the bulk, with birds—which, we’re made to understand, are of greatest concern for Hildreth, Vantassel, and Hygnstrom—comprising a couple percent at most.

Considering the brevity of the report’s Issues and Impacts section (roughly the same space as was allotted to lethal control methods), the authors managed to squeeze in a surprising amount of misinformation.

Cats and Birds, In the News, Research Protocol, Threats to Wildlife