Perhaps it’s an act of desperation, this “kitchen sink” approach favored by some free-roaming cat/TNR opponents. Throw everything—including the kitchen sink—into the anti-cat argument, and perhaps something will stick. Their impact on wildlife and the environment, for instance, or their threat to public safety—it seems there’s something for everybody. (Surely it’s only a matter of time before beach erosion, ozone depletion, and climate change are added to this growing rap sheet.)

But for those of us willing to sort through this quantity-over-quality smokescreen, such arguments rarely prove substantive.

I touched on this point in one of my first Vox Felina posts, referring to how the now-classic predation study conducted by William G. George has been misread, misinterpreted, and misrepresented. This work, perhaps more than any other, has been used to suggest an indirect impact of free-roaming cats on raptors.

George was very cautious about drawing such a connection, acutely aware of the speculative nature of his own work. In recent years, however, the details of George’s work—and his well-tempered conclusions—have given way to a kind of mythology, having been co-opted by scientists more interested in their own agendas than in rigorous scientific inquiry.

The Study
Over four years, from January 1, 1968 through December 31, 1971, George monitored and recorded with meticulous care the various small mammals his three cats killed on his “fallow farmland” property in rural Cobden, Illinois. “As predators on rodents,” writes George, “cats inevitably compete for prey with many of our declining raptors, and therein may lie a serious problem.” (emphasis mine) [1].

“I am not suggesting a cause-and-effect relationship exists between the historical increase of cats and the historical decrease of raptors; however, cats, which are as efficient in their way as guns and DDT, accompany and add another dimension to man’s encroachment into wildlife areas.” [1]

The trouble, of course, is that so many scientists citing George’s work have suggested exactly that.

The Myth
“Cat predation on mammals,” write Longcore et al., is “cause for concern because of direct impacts to native species and competition with native predators (George 1974).” [2] “Human-subsidized cats,” warn Guttilla and Stapp, “can spill over into less densely populated wildland areas where they reduce prey for native predators (George 1974).” [3]

Of course anybody who grew up, as I did, watching Wild Kingdom, knows that competition is a central theme of many stories played out in the natural world. But competition for prey is one thing; having an impact on the population of competitors is something else altogether.

Which is precisely what Loyd and DeVore—citing only George’s research—suggest: “Feral cats can also have a considerable impact on the broader health of ecosystems by outcompeting native predators (George 1974)…” [4]

Dauphiné and Cooper, too, interpret George’s work rather loosely, but also seem to offer additional evidence of the indirect impacts about which he speculated:

“In addition to having direct impacts on prey, cats compete with avian predators, such as American Kestrels (Falco sparverius), Northern Harriers (Circus cyaneus), and Redtailed Hawks (Buteo jamaicensis) (George 1974, Mosher 1989, Lepczyk et al. 2004). George (1974) estimated that cats killed 5.5 million rodents and other vertebrates in a 26,000 square mile area in Illinois, effectively depleting the prey base for wintering raptors and other native predators.” [5]

What did Lepczyk add to the conversation? Nothing, actually; he merely cited George’s study:

And Mosher? This one’s far more interesting. According to Dauphiné and Cooper, Mosher’s research reveals some compelling evidence:

“In a study in Maryland of Cooper’s Hawks (Accipiter cooperii) that depended heavily on eastern chipmunks (Tamias striatus) to feed nestlings, Mosher (1989) found that these raptors altered their diet to prey more on songbirds in an area where chipmunks were eradicated by cats. The resulting increase in hunting time and difficulty for Cooper’s Hawks was associated with a decrease in nestling survival.” [5]

But Mosher’s paper includes no mention of cats at all. In fact, he suggests only “that reproductive performance, especially in studies encompassing relatively small areas, may reflect natural phenomena such as dependence on a particular prey species that undergoes population fluctuations.” [7] I found an earlier paper by Mosher, also mentioning chipmunks and Cooper’s Hawks [8]—but again, no mention of cats.

It’s possible this is an honest mistake, that Dauphiné and Cooper merely included the wrong reference. However, I was unable to find a hint of any such research in my (admittedly brief) online sleuthing. And, given the sloppiness and bias that permeates the rest of their paper, nothing these two might do would surprise me.

(If, as Dauphiné and Cooper suggest, the real problem is that raptors are preying on songbirds rather than chipmunks, then shouldn’t we be doing everything in our power to increase the chipmunk population? It’s an absurd suggestion, of course—but only slightly more so than many accepted wildlife “management” practices.)

Getting back to George’s research, the winner for most distorted version undoubtedly goes to David Jessup, who writes with a certitude generally reserved for politicians, marketers, and novelists. Gone is the trepidation George expressed—first, regarding the impact of cat predation on rodent and other prey populations; second, regarding the relationship between these populations and the raptors that feed on them. For Jessup, who offers no additional evidence, it’s all very straightforward:

Local/Regional Raptor Update
So, how have those raptors fared in the subsequent 40 years? Certainly there are factors other than cats that would likely contribute to their decline—habitat fragmentation and destruction, for instance. Such environmental impacts have the potential to affect the birds themselves, clearly, but also their prey.

Research into the population trends of Red-tailed Hawks, Northern Harriers, and American Kestrels—three raptors identified specifically by George—suggests that his concerns were largely unfounded.

BBS Routes and Data
Only one Breeding Bird Survey (BBS) route runs into Union County, Illinois, where George’s property was located. Unfortunately, count data for BBS Route 34080 go back only to 1993. However, data for neighboring routes are available from the time of George’s study through 2006. Surveys along two nearby routes in Illinois (34059 and 34061) began in 1970; surveys of two others, along the eastern edge of Missouri (52001 and 52007), date back to 1967. 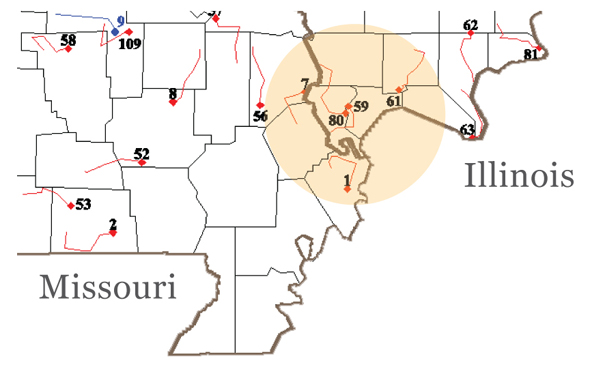 No BBS count data from the routes in question are available for Northern Harriers, suggesting that perhaps this species was, for one reason or another, simply not included. Data sets for other birds—the Red-shouldered Hawk, for example—exist despite frequent counts of zero (in the case of the Red-shouldered Hawk, just one bird was recorded along Routes 52001 from 1967 through 2006).

BBS data for Red-tailed Hawks indicate a rather dramatic population increase for the two southwestern Illinois routes, and slight increases for the same period across the two eastern Missouri routes, as indicated in the following graphs. 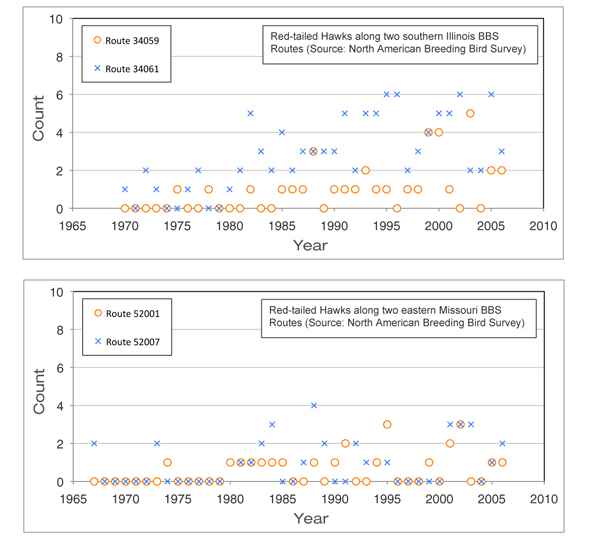 Populations of American Kestrels (along the same routes and for the same period) remained mostly stable.

The bottom line? If the area’s cats are out-competing the raptors for prey, there’s no evidence in the BBS count data.

Prairie Voles
Of particular interest to George were prairie voles, which made up “more than 41 percent of all captured vertebrates and 45 percent of the captured mammals.” [1] And whose reduced numbers, suggested George, “could well pose the principal threat to the success of wintering hawks in my area of study.” [1] But maybe the voles weren’t as important as George surmised.

In Minnesota, the declining population of prairie voles—significant enough to warrant “special concern species” status beginning in 1984—seems to have had no effect on the populations of Northern Harriers, Red-tailed Hawks, and American Kestrels. Indeed, BBS data indicate that these raptors’ numbers have fluctuated little over the past 40 years or so. (And, according to the Minnesota Department of Natural Resources, the reason for the state’s declining vole numbers has nothing to do with cats, but “is due almost exclusively to the destruction of its prairie habitat through plowing and over-grazing.”)

Raptors Across the Country
Of course, isolating the relationship between the population of a predator and that of its preferred prey species is incredibly difficult; there are simply too many additional—often interdependent—factors that must be considered. Zooming out for a big-picture view of population dynamics across the U.S. only blurs such relationships, thereby complicating any subsequent analysis.

Nevertheless, I think it’s worth a look. George claimed (unfortunately, without referring to a specific source, and without specifying whether he was referring only to owned/pet cats) that there were 31 million cats in the U.S. at the time of his study. [1] Today, according to the American Pet Products Association’s 2009–2010 National Pet Owners Survey, there are 93.6 million.

Direct comparisons over this 40-year time frame are difficult for a number of reasons (e.g., lack of reliable data, the increasing proportion of indoor-only cats in recent years, etc.). But if, as some suggest, cats are having an negative impact on raptor populations—and there are now three times as many of them (not accounting for feral cats, whose numbers have also likely increased)—well, one might expect find these birds in dire straights by now.

The outlook for the Northern Harrier and Red-tailed Hawk is mostly good. “The Northern Harrier is considered secure in most of North America,” notes its 2007 conservation report, “but it is a species of concern regionally in many of the [Bird Conservation Regions] west of the Mississippi River.”

The Red-tailed Hawk, too, “is considered secure throughout most of its range in North America.”

“Migration counts have declined in eastern North America since 1995, but concurrent increases in [Breeding Bird Surveys] and [Christmas Bird Counts] suggest that these migration trends may be the result of changes in migration geography or behavior. Elsewhere in North America, population monitoring generally indicates increasing or stable populations of this common raptor.”

American Kestrels, on the other hand, seem to be in trouble: “Overall, the data suggest substantial declines in populations… across much of North America, and consequently strong cause for conservation concern.” The factors affecting these declines are unknown and, the report notes, “warrant further investigation.” However, some patterns have been observed—“factors exerting negative influences on populations are strongest along the Atlantic coast,” for example. Also: “More recent declines in western North America… appear to have occurred in concert with a prolonged drought.”

The Cornell Lab of Ornithology’s website paints a rather different picture, noting that the population of American Kestrels “increased greatly with historical deforestation of North America. No significant trend across North America, but some local increases and decreases.”

All of which adds up to… what? Like the BBS data, the Hawk Mountain Sanctuary Conservation Status Reports reveal population trends perhaps best described as “mixed.” Nowhere is there any indication that declining raptor numbers can be linked to the success of competing predators—including cats.

For George, the idea was nothing more than a hypothesis anyhow. But rather than put it to the test (ostensibly the role of scientists), Longcore, Dauphiné, Jessup, and the rest, have instead tried to elevate its status through nothing more than repetition—thereby betraying an agenda that has little to do with science at all.

5. Dauphiné, N. and Cooper, R.J., Impacts of Free-ranging Domestic Cats (Felis catus) on birds in the United States: A review of recent research with conservation and management recommendations, in Fourth International Partners in Flight Conference: Tundra to Tropics. 2009. p. 205–219. www.pwrc.usgs.gov/pif/pubs/McAllenProc/articles/PIF09_Anthropogenic%20Impacts/Dauphine_1_PIF09.pdf