That the ancient Egyptians worshiped cats as gods is, today, common knowledge. Just as their regal little bodies were preserved through mummification, their likenesses were preserved in tomb paintings.

But the cat’s image has not always been portrayed with such reverence. “To the medieval mind,” writes naturalist and biologist Roger Tabor, “there was a sinister side to cat magic, associated with demons and witchcraft. It led to the lowest ebb in the history of the cat.” [1] Naturally, that “sinister side” was depicted in both words and pictures.

Eighteenth century artwork, such as Hogarth’s The Four Stages of Cruelty, suggests that, as Tabor writes, “abuse and torture [of cats] were still widespread.” [1]

And today? Well, it’s a mixed bag. There are the wildly popular LOL Cats, of course, that routinely make their way around the Web. And an astonishing number of photos, illustrations, and videos. (Searching iStockphoto.com for “cats” turns up nearly 40,000 results.)

At the same time, less flattering images seem to be quite popular, too. (“People are rarely neutral about cats,” notes Tabor.) This is hardly surprising; beliefs and attitudes—whatever their origins—rarely change quickly. What is surprising, though, is how some of these images have been employed—at least in some cases—by sources one is expected to take seriously.

I’ve encountered several examples over the course of my research, and have begun “collecting” them for an occasional series of posts, of which this is the first.

Framed No. 1
I don’t recall exactly, but it’s entirely likely that this little gem—from AmmoLand.com, “the webs [sic] leading Shooting Sports News Service for the Ammunition, Firearms, Shooting, Hunting and Conservation communities,” was the one that sparked the idea for the Framed series. Celebrating the injunction earlier this year against publicly funded TNR in Los Angeles, it seems the AmmoLanders got a little carried away. 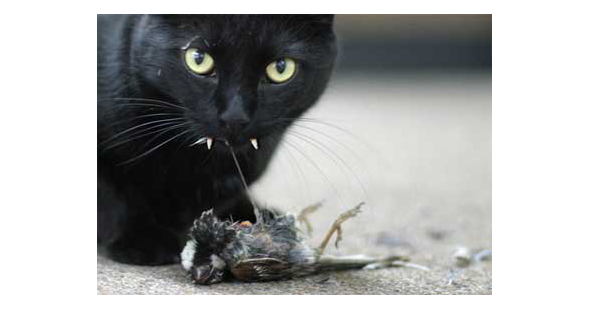 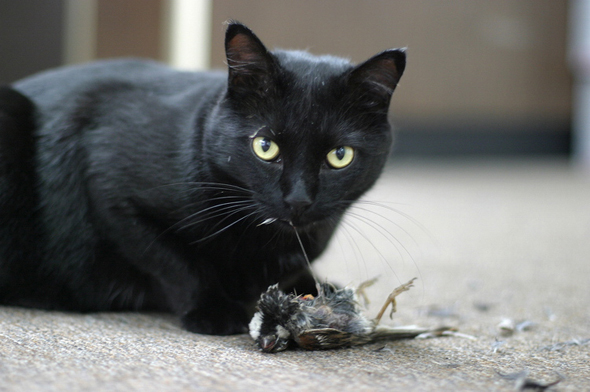 The faux canines are gone, and blogger Bill Askenburg does a better job getting his apostrophes correctly placed. The content itself, though, is no better, as Askenburg has apparently been drinking too much of the American Bird Conservancy’s Kool-Aid.

Finally, a little more digging reveals the original source of the photo, thanks to John Blatchford, a zoology feature writer for Suite101.com, who properly credits Mark Marek Photography.