In late 2009, Sharon George was struggling to recruit participants for her master’s thesis. A student in the University of Cape Town’s conservation biology program at the time, George was studying the hunting habits of suburban Cape Town’s pet cats. Although she’d distributed 600 questionnaires, only 32 had been completed—a response rate George describes as “very poor” in her thesis [1].

“The project in general was very challenging because of the way many cat owners perceived it. The majority of cat owners were unwilling to participate in the study because they felt it was ‘against’ cats and would lead to extreme measures being taken to control cat numbers” [1].

It turns out, the majority of cat owners were not wrong about that.

George’s results were published online in July as part of a larger study, accompanied by a media release (PDF) warning that “the research highlights the need to address the impact of cat predation on Cape Town’s wildlife, particularly near protected areas such as the Table Mountain National Park.” This led (not surprisingly) to sensational headlines proclaiming “‘200,000-plus’ wild animals slaughtered in Table Mountain National Park by Cape Town cats each year” and “Apocalypse Miaow II: ‘Keep cats inside property’, SANParks urges Capetonians.”

END_OF_DOCUMENT_TOKEN_TO_BE_REPLACED 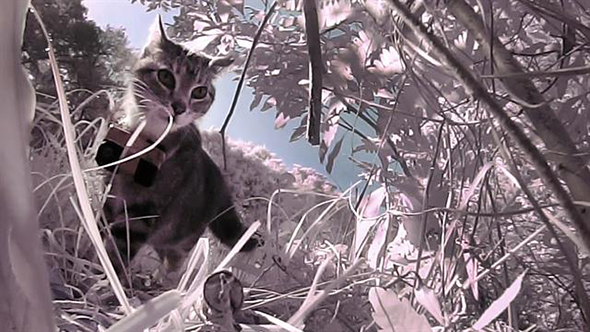 The headline from a National Geographic story posted online earlier this week created immediate buzz: “Island’s Feral Cats Kill Surprisingly Few Birds, Video Shows.” Whether or not you were actually surprised, I suppose, depends largely on how much you’ve been paying attention to the issue.

The team of researchers whose work is described in the NatGeo piece, led by the University of Georgia’s Sonia Hernandez, could—more than most—have anticipated such results. Kerrie Anne Loyd—for whom Hernandez served as PhD advisor—pioneered “KittyCam” research during her doctoral studies at UGA. And in April 2012, Loyd, discussing the results of “KittyCam 1.0” with Atlanta’s CBS affiliate, conceded, “Cats aren’t as bad as biologists thought.” 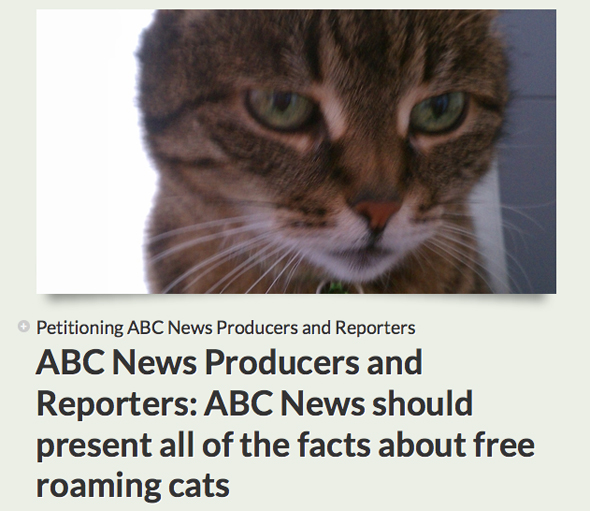 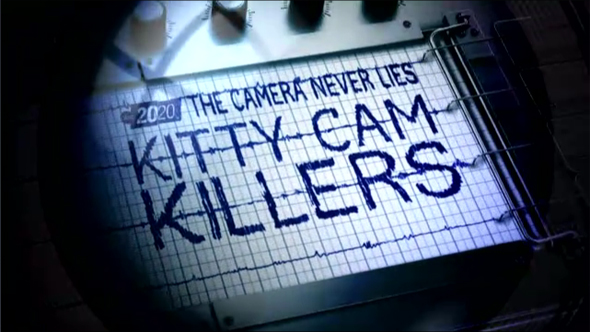 With just six minutes and 34 seconds to play, I don’t imagine readers got very far with their bingo cards during Friday night’s episode of 20/20 (“The Camera Never Lies: Kitty Cam Killers”). (My apologies for not including Killing Spree—I should have seen that one coming.) It was clear, though, from the footage of George Fenwick’s interview, that things could have played out very differently—the president of the American Bird Conservancy had his talking points down. END_OF_DOCUMENT_TOKEN_TO_BE_REPLACED 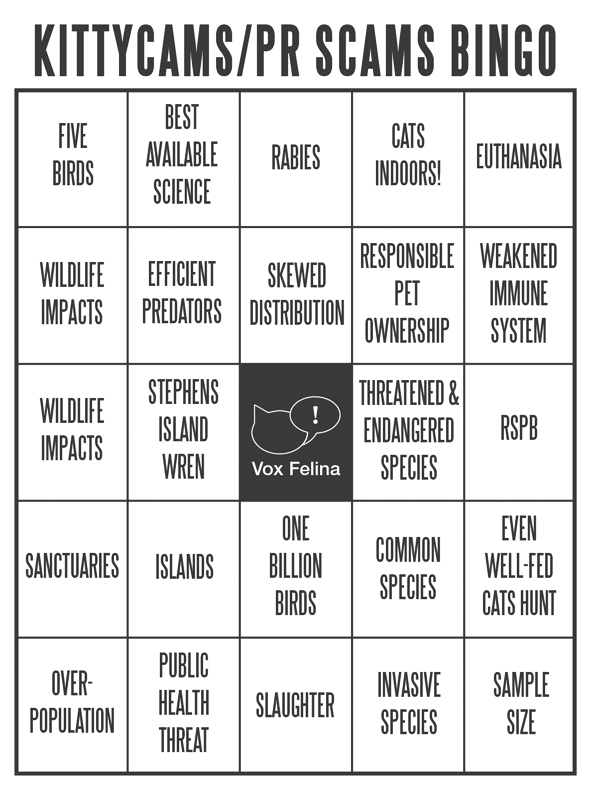 Earlier this week, the American Bird Conservancy announced to eNewsletter subscribers that ABC president George Fenwick will be appearing on ABC News’ 20/20 tonight “in a segment about domestic cat predation on birds and other wildlife.”

“The program was prompted by an August American Bird Conservancy news release on a University of Georgia and National Geographic study of house cats that were allowed to roam outdoors. The activities of the cats were recorded using small video cameras attached to the cats’ collars, leading to some startling results.  The issue has recently been covered by almost 100 newspapers nationwide as well as by CNN, CBS and USA Today. Members of that study team will also appear on Friday’s program.”

As I pointed out the day that news release was issued, it was an attempt at persuasion not through truth and credibility, but through blunt force—through nothing more than amplification and repetition.

I suspect Fenwick’s appearance on 20/20 will be no different. He and his colleagues at ABC have been lying about the impacts of free-roaming cats for at least 15 years now; I don’t imagine him rediscovering his integrity just when he’s got a television audience eager to hear all about, as 20/20 suggests in its segment title, the “Cutest Serial Killer You’ll Ever Meet.”

After all, some of the people tuning in might actually believe Fenwick. Especially if, as is typical of the mainstream media, the 20/20 team takes his indefensible claims at face value—never bothering with even the most obvious follow-up questions.

I am curious, though, to see if Kerrie Anne Loyd is among study team members to be interviewed. And, more to the point, which Kerrie Anne Loyd—the one who told CBS Atlanta, “Cats aren’t as bad as biologists thought”? That would be rather awkward, wouldn’t it?

In any case, Vox Felina readers will be prepared, bingo cards in hand. Unlike the original, however, this set of cards was designed to make winning virtually impossible. Look carefully at the cards and you’ll see that some have a space marked Five Birds, for example. Not likely Fenwick’s going to bring up the fact that only five birds were killed over the course of Loyd’s study (in which 55 cats contributed 2,000 hours of video). Or that they were, as seems to be the case, Common Species.

You get the idea. The downloadable PDF includes four bingo cards and 120 chips.

Whether you actually play along or not, don’t forget to leave a comment on the 20/20 website letting them know what you thought of the show.

In a joint media release, the American Bird Conservancy and The Wildlife Society team up to misrepresent the results of a recent predation study, decrying the “ongoing slaughter of wildlife by outdoor cats.” Meanwhile the University of Georgia researcher contradicts her previous position that “cats aren’t as bad as biologists thought.”

“‘KittyCam’ Reveals High Levels of Wildlife Being Killed by Outdoor Cats,” declares a media release issued today—a joint effort of the American Bird Conservancy and The Wildlife Society, and, to my knowledge, the first of its kind.

It’s difficult not to see this as an act of desperation—the PR-equivalent of an all-caps e-mail. I’m surprised it hasn’t happened sooner, though, given all that ABC and TWS have in common. Their shared disdain for TNR, obviously, but also their utter disregard for science, scientific literacy, and the truth about the impacts of free-roaming cats. Two peas in a pod, as it were. (Irony: peas are, alas, not native to North America.)

And so, their joint media release is exactly what one would expect: heavy on errors, misrepresentations, and glaring omissions, and light on defensible claims. END_OF_DOCUMENT_TOKEN_TO_BE_REPLACED