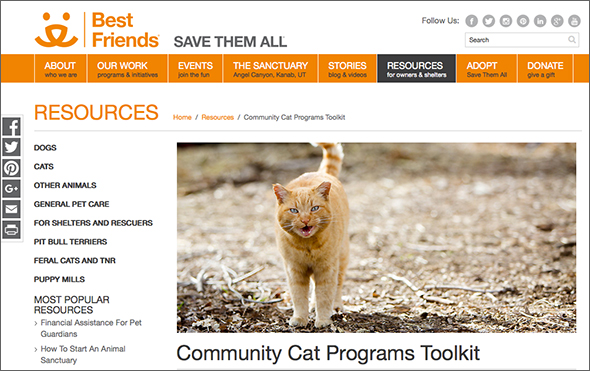 Today is, as I assume most readers know, National Feral Cat Day. And, as Alley Cat Allies (which launched the annual celebration 15 years ago) explains on the NFCD website (where you can find events in your area, by the way), this year’s theme is “The Evolution of the Cat Revolution.”

Among the most recent phases in that evolution are return-to-field (sometimes called shelter-neuter-return, or SNR) programs, in which healthy cats brought into shelters as strays are sterilized, vaccinated, and returned to where they were found. RTF programs can be very effective at reducing shelter deaths—for obvious reasons—but have also demonstrated dramatic reductions in intake, too.

And where these programs result in a lower intake of young kittens, there’s good reason to think they’re reducing the overall number of community cats.

Through its innovative public-private partnerships, Best Friends Animal Society (in partnership with PetSmart Charities™) operates more RTF programs than any other organization in the country. And today, in celebration of NFCD, Best Friends is unveiling our* Community Cat Programs Toolkit, a comprehensive online resource covering a broad range of relevant topics, from humanely trapping cats and caring for them during post-surgery recovery to marketing and public relations.

Have a look and please share the news with others—and happy National Feral Cat Day!

* Full disclosure: I’ve been employed full-time by Best Friends since May 2013.

As most readers are undoubtedly aware, today is National Feral Cat Day. And at the risk of stating the obvious: NFCD has clearly become, to borrow a trendy phrase from social media, “a thing.” Now in its 14th year, there are hundreds of events going on around the country to mark the occasion.

All of which must be terribly frustrating for TNR-deniers. Thus, their increasingly desperate attempts to oppose, any way they can, TNR and community cat programs.

Witness, for example, Cats, Birds, and People: The Consequences of Outdoor Cats and the Need for Effective Management (PDF), a presentation by Grant Sizemore—who may or may not be the American Bird Conservancy’s Director of Invasive Species Programs. (As we’ll see shortly, it’s surprisingly complicated.)

It’s not clear exactly who these 33 slides are intended to help. After all, to anybody even remotely familiar with the issue, it’s immediately apparent that Sizemore’s claims—the “consequences” mentioned in the presentation’s title—are flimsy at best.

Equally apparent: Sizemore and ABC are not—though ABC’s been on this witch-hunt for 17 years now—about to provide any solutions.

Not only is the presentation available on ABC’s website, Sizemore’s now taking the show on the road. Last month, for example, he was in Ellenton, Florida, as part of a Coyotes and Feral Cats forum, hosted by the Suncoast Cooperative Invasive Species Management Area.

No doubt, most readers will miss such opportunities. Here, then, are 11 of the presentation’s “highlights”—my humble gift on National Feral Cat Day 2014. END_OF_DOCUMENT_TOKEN_TO_BE_REPLACED

National Feral Cat Day is just around the corner—October 16th. This year, celebrate in style with Feral Cat Mafia* gear! 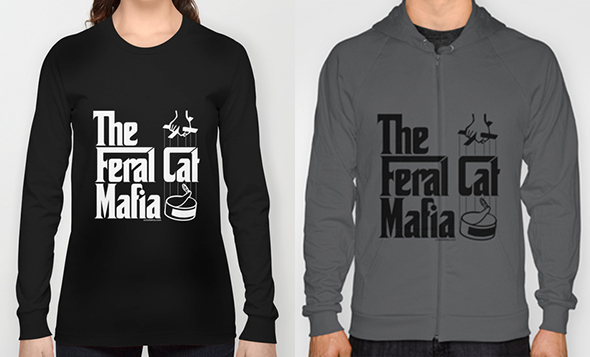 Among the many items available from the Vox Felina shop are hoodies and long-sleeve t-shirts, perfect for fall! Better hurry if you want them in time for the big day, though, as expedited shipping is not available.

I had this year’s National Feral Cat Day post all worked out—which is to say, I’d given myself something like 24 hours to round up the various materials needed (the easy part), assemble what I think we can all agree is a brilliant prop (also easy), and then photograph my cats with the aforementioned prop (what was I thinking?).

As the photos below illustrate, the concept was rock-solid. It was the execution that suffered from (1) a rushed schedule, (2) poor-quality photography, and (3) a lack of assistants. END_OF_DOCUMENT_TOKEN_TO_BE_REPLACED

National Feral Cat Day is still a month away, but the celebration is already well underway with Alley Cat Allies’ announcement of their National Feral Cat Day Awards Program. As the organization explains on the NFCD website, this year the awards are being used to recognize shelters that commit to implementing innovative policies for protecting community cats.

This year, our National Feral Cat Day® Challenge focuses on partnering with shelters to take strides to protect even more cats. And our National Feral Cat Day® Awards Program will support five shelters that commit to an official Feral Cat Protection Policy (FCPP), which means that they stop impounding feral cats, and support Trap-Neuter-Return (TNR). There are many “blueprints” for saving cats’ lives, but the Feral Cat Protection Policy is the number one lifesaving program for cats. When shelters stop impounding feral cats, cat intake decreases, community buy-in increases, and lives are protected. Instead of impounding feral cats, also known as community cats, shelters can re-route them to TNR programs where they are neutered and returned to their colony.

Each of the five NFCD Awards Program winners will receive:

Know a shelter that’s doing right by community cats? Encourage them to apply—so that they can do even more! Applications can be found at the NFCD website. The deadline is right around the corner—midnight, Friday, September 20th.

It’s National Feral Cat Day—what better occasion to recognize some of the positive developments in feral cat/TNR advocacy I’ve observed over the past two-and-a-half years since launching Vox Felina?

National Feral Cat Day debuted in 2001, created by Alley Cat Allies “to raise awareness about feral cats, promote Trap-Neuter-Return, and recognize the millions of compassionate Americans who care for them.” As of yesterday, ACA had registered 368 events for this year’s celebration, and they were still hearing from activists eager to get on board. All 50 states are represented, and events are going on in other countries as well.

It was just about two years ago that Best Friends (wisely!) hired Laura Nirenberg as legislative attorney for their Focus on Felines campaign. I’m honored to be joining Laura, along with Lisa Tudor, Director of Development and Outreach for the Foundation Against Companion-Animal Euthanasia (FACE), at the upcoming No More Homeless Pets Conference as we present Taking It to the Street (Cats): Grassroots Advocacy for Community Cats.

The Humane Society of the United States

Another reason I’m looking forward to this year’s conference: meeting Katie Lisnik, director of cat protection and policy for HSUS. This, of course, was the position that Michael Hutchins, former executive director/CEO of The Wildlife Society, referred to as “wild bird executioner” in his August 16, 2011 blog post. While Katie and I have yet to officially meet, it’s difficult not to like—automatically—anybody whose hiring got Hutchins so agitated.

Although TNR is still not endorsed by the entire animal control community, there seems to be a significant shift in that direction at the National Animal Control Association. The September/October 2011 issue of NACA News, for example, featured an article by Lynne Achterberg, founding board member of Santa Cruz, California’s Project Purr, highlighting the benefits of TNR. In “Paradigm Shift: Return to Field,” Achterberg explained that for communities interested in increasing their shelters’ live release rates, “TNR and inclusion of feral cats is key.”

In the January/February 2012 issue, NACA president Todd Stosuy cited TNR as one “proactive animal program” that “can help reduce the number of animals coming into the shelter, and thus reduce euthanasia in the long-run.”

It’s no surprise, really, that people support TNR over lethal control methods—we are, after all, a nation of animal lovers. But it’s another thing for TNR to become a more integrated part of the culture. Here, too, there’s good news to report.

Witness, for example, two recent books on the subject: Taming Me: Memoir of a Clever Island Cat (released today to correspond with NFCD, and which I reviewed for Moderncat) and Fairminded Fran and the Three Small Black Community Cats. 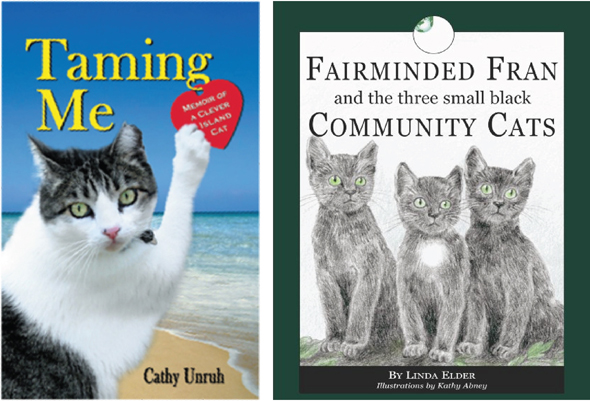 And it seems the rest of the world has figured out what some of us have known for a while now: it’s hip to be tipped. Check out the specially-designed pillowcases and tote bags by Xenotees (whose founder is donating all related profits to Four The Paws, a Philadelphia area rescue). Additional “ear-tipped” items are being featured today at Moderncat (where, by the way, you can get in on an NFCD giveaway). 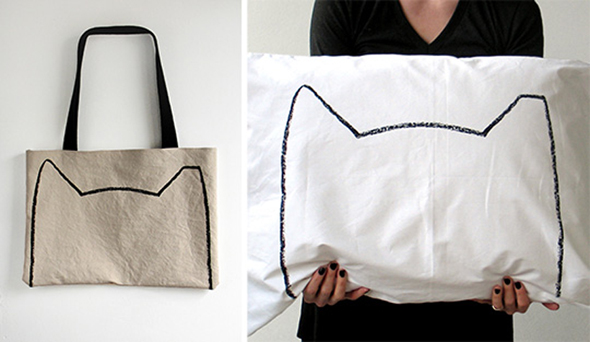 Finally, I would be remiss if I didn’t also acknowledge my many readers. I know from the e-mail I receive, and comments posted on the Vox Felina Facebook page, of your tireless support for TNR, and feral cats in general. “Regular folks” concerned for the welfare of feral, stray, and abandoned cats who are engaging their government officials and neighbors; “freelance” colony caregivers sharing their hard-won knowledge with others; and various well-established organizations shaping policy at the state and national level—I am humbled by your commitment and compassion.

Thank you for your support, and for all that you do on behalf of the cats!

National Feral Cat Day is just around the corner—October 16th. And to mark the occasion, Tomahawk Live Trap and Tru-Catch are offering special discounts. 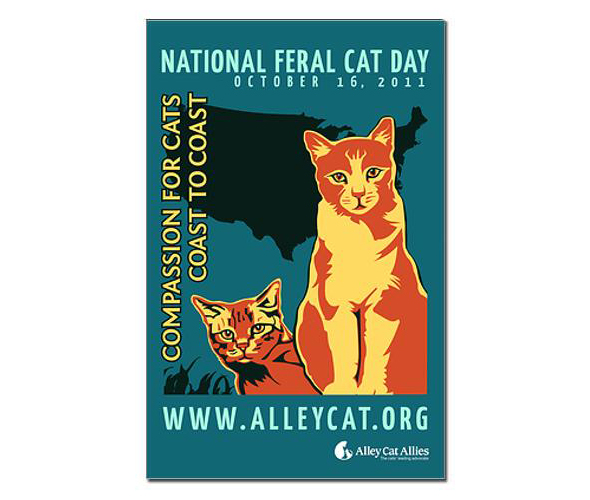 As many of you are no doubt aware, Sunday is National Feral Cat Day, a holiday created 10 years ago by Alley Cat Allies “to raise awareness about feral cats, promote Trap-Neuter-Return, and recognize the millions of compassionate Americans who care for them.” This year, there are more than 320 events planned across all 50 states.

Even so, I’ll bet there are a number of scientists, journalists, and others who—despite devoting a great deal of attention to the topic the rest of the year—have allowed the holiday to sneak up on them, and therefore haven’t made plans. Here, then, are some suggestions for how some of these folks (listed in no particular order) might mark the 10th annual National Feral Cat Day.

Thank you to all those who—whether one day a year or year-round—raise awareness about, and care for, abandoned, stray, and feral cats, and promote TNR.

A feral animal, having once been domesticated, is not the same as a wild animal. A wild animal may become tamed—indeed, many infant mammals can be tamed—but the ancestors of a feral animal have already been tamed, through the process we know as domestication.—Ellen Perry Berkeley, Maverick Cats: Encounters with Feral Cats

You become responsible, forever, for what you have tamed.
—Antoine de Saint-Exupéry, The Little Prince