Coming up this Wednesday: “Impacts of Free Roaming Cats on Native Wildlife,” a Webinar sponsored by the U.S. Fish and Wildlife Service. Registration, from what I can tell, appears to be open to the public—though I’m still awaiting a confirmation e-mail (which will include, I hope, some clarification re: time zone for this “2:00–3:00 pm” event).

The USFWS Website lists the agency’s own Tom Will as the scheduled speaker, and includes the following description:

A rapidly growing feral and unrestrained domestic cat population kills an average of at least 1.5 million birds in the U.S. every day—and even greater numbers of small mammals and herptiles. Every small songbird species is vulnerable at some stage of its life cycle. Despite ample peer-reviewed science documenting the failure of trap-neuter-release (TNR) programs to reduce cat populations or address wildlife depredation, TNR and outdoor cat feeding colonies continue to be marketed to city councils, county boards, and state legislatures as a viable option. As a result, TNR feeding colonies are proliferating across the landscape at such an alarming rate that wildlife conservation programs intended to create source habitat are being rendered ineffectual in many areas. In this presentation, I briefly review the science on the effects of outdoor cats on wildlife and the ineffectiveness of TNR programs. Then, examples of the decision making process leading to community endorsement of TNR provide some insight into the roadblocks to effective conservation action. Finally, I offer a suite of strategic conservation actions at national agency, community, and home scales whereby the Service and its partners might work effectively to reduce the negative effects of irresponsible civic TNR decisions on wildlife trust resources.

This Webinar, then, could be our chance to see the science behind the number. Or not—if this week’s presentation is anything like the one Will gave in 2010 to the Bird Conservation Alliance (which, according to its Website, is “facilitated by” ABC). Last year’s show, “What Can Federal Agencies Do? Policy Options to Address Cat Impacts to Birds and Their Habitats,” available (downloadable PDF) via the Animal Liberation Front Website, was short on science and long on rhetoric (and plenty of misinformation, too).

Now, I’ve no way of knowing what Will is going to present this week. So, although these things tend to be remarkably predictable, I’ll reserve judgment.

That said, it seems like a good time for a quick look at his 2010 material.

Birds of a Feather
As it happens, Tom Will is among those Nico Dauphine thanks “for helpful information, advice, ideas, and discussion in researching this subject” in her 2009 Partners In Flight conference paper. [2] And much of the material Will used last year was shown a year earlier by Dauphine, in her infamous “Apocalypse Meow” presentation. (The similarities are uncanny, actually: identical background color, many of the same images, etc.)

Death by (Faulty) Statistics
Like Dauphine, Will includes the graph (shown below) from the second edition of Frank Gill’s Ornithology, suggesting, apparently, that predation by cats far exceeds all other sources of mortality combined (a claim Dauphine made in her 2008 letter to the editor of the St. Petersburg Times). 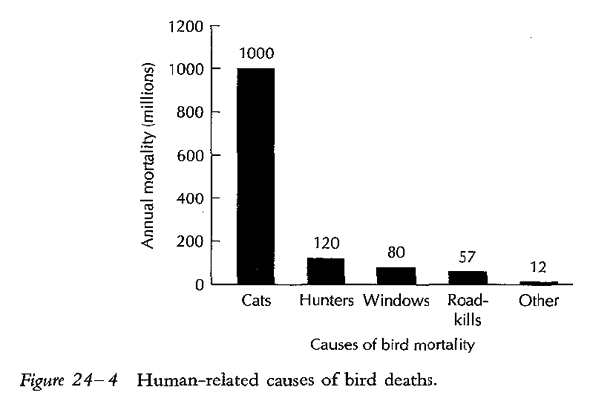 But, as I’ve explained previously, Gill’s cat “data” aren’t data at all, but the indefensible (in terms of its lack of scientific merit, but also its almost palpable bias) guesswork of Rich Stallcup, co-founder of the Point Reyes Bird Observatory.

All of which raises serious doubts about USFWS’s commitment “to using sound science in its decision-making and to providing the American public with information of the highest quality possible.”

Counting Cats
The more intriguing visual, though, in Will’s 2010 presentation (shown below) is meant (it seems) to illustrate the relationship between the increasing population of cats and the decreasing populations of bird species over the past 40 years or so. 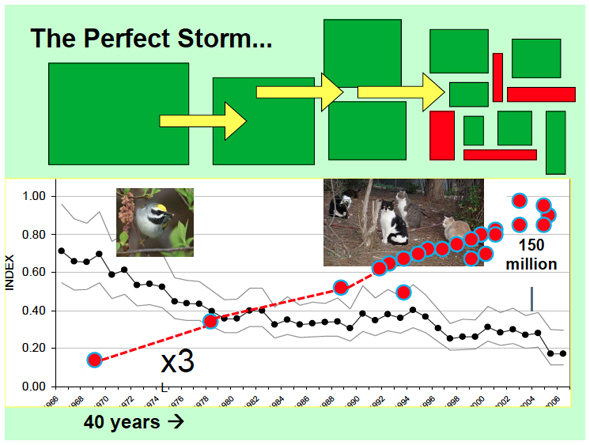 But, of course, correlation is not the same as causation. I’ll bet that, like cat ownership, membership in the National Audubon Society has risen steadily over the past 40 years—but somehow, I don’t imagine anybody suggesting that bird populations decline as NAS membership climbs.

What first caught my eye was not the the implied relationship between cat numbers and bird numbers, however, but the red dots themselves. The same data were plotted (as shown below) in “What Conservation Biologists Can Do to Counter Trap-Neuter-Return: Response to Longcore et al.,” [3] published last year in Conservation Biology, (among the paper’s 10 co-authors, by the way: Nico Dauphine and Peter Marra). 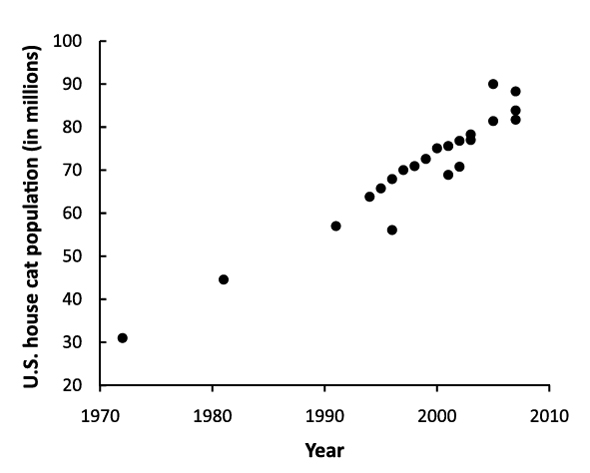 Look closely at the two graphs, and you’ll see that Will has gotten creative here. His data points (which, I believe, come primarily from the U.S. Census and APPA) are identical to those used in the letter to Conservation Biology, but the vertical scale’s been changed. In Will’s version, the upper right portion of the graph has jumped from 90 million to 150 million cats! (His horizontal axis is shifted slightly, but the impact is nothing by comparison.)

So much for “using sound science” and “providing the American public with information of the highest quality possible.”

Roaming Charges May Apply
What if Will stuck to what the data actually show? It seems the message is pretty clear: since 1971, the number of pet cats in the U.S. has nearly tripled.

OK, but what does that mean for the nation’s wildlife? Keep in mind: the country’s human population swelled by 43 percent over the same period, taking an enormous toll on wildlife—either directly (e.g., loss of habitat via development, birds colliding with buildings, etc.) or indirectly (e.g.,  increased pollution and pesticide use).

Let’s set all that aside for the moment, though, and get back to pet cats. Even if the graphs accurately reflect the upward trend of cat ownership in the U.S. (and I’m not sure they do), they grossly misrepresent the threat to wildlife—which, presumably, is the point.

Simply put, there are not three times as many pet cats outdoors today.

The data I have, from the American Pet Products Association, [4] go back only to 1998. At that time, 56 percent of cat owners responding to APPA’s National Pet Owners Survey indicated that their cats were indoors-only; in 2008, that figured had climbed to 64 percent.

With an estimated 89.6 million pets cats in the U.S. in 2010, then, that means that about 32.4 million cats are outdoors for at least some part of the day (and approximately half of those are outside for less than three hours each day [5, 6]).

What was the proportion in 1971? Unfortunately, I’ve been unable to find any survey results from the 1970s or 1980s. All we can do it guess.

Let’s say that in 1971 just one-third of pet cats were kept indoors exclusively (the very situation Dauphine would have us believe we’re facing today). That means 21.5 million cats were free-roaming for at least some part of the day.

Again, this is a guess—not an unreasonable one, but a guess anyhow. Still, the implications are significant. While it’s true that the number of pet cats has tripled over the past 40 years, the number that are free-roaming has probably increased by only 50 percent or so.

Prosecution or Persecution?
Finally, I’m curious to see if Will’s “suite of strategic conservation actions” will include, as his 2010 presentation suggests, threatening those who conduct or officially endorse TNR with prosecution under the Endangered Species Act (ESA) and the Migratory Bird Treaty Act (MBTA).

This has become a common tactic in recent years (see, for example, the Florida Keys National Wildlife Refuges Complex Integrated Predator Management Plan/Draft Environmental Assessment, released earlier this year), though it goes back to at least 2003, when Pamela Jo Hatley, then a law student, suggested the possibility.

(One wonders if USFWS, the agency responsible for drafting the Keys Predator Management Plan, could be prosecuted under the ESA and MBTA in the event—not unlikely—that a large-scale round-up of feral cats resulted in a population explosion of rats, which in turn decimate the very species the Plan claims to protect.)

As a say, I’m not going to critique Will’s presentation until he’s had the chance to give it. Indeed, he may very well deliver on the science review, policy insights, conservation actions, etc. If what he provided the BCA is any indication, though, the man’s got his work cut out for him.

2. Dauphine, N. and Cooper, R.J., Impacts of Free-ranging Domestic Cats (Felis catus) on birds in the United States: A review of recent research with conservation and management recommendations, in Fourth International Partners in Flight Conference: Tundra to Tropics. 2009. p. 205–219. http://www.pwrc.usgs.gov/pif/pubs/McAllenProc/articles/PIF09_Anthropogenic%20Impacts/Dauphine_1_PIF09.pdf

In the News, Legal Issues, Policy Issues, Threats to Wildlife