In a 2011 paper published in the Journal of Wildlife Management, Jeff Horn and his co-authors estimate the home range of owned and unowned cats, arguing that “greater activity levels and ranging behavior suggest unowned cats have a greater potential impact on wildlife than do owned cats.”

“Our results indicate that feeding and owner care modifies the space use and activity of free-roaming cats, information that is important for making decisions on controlling cat populations and the potential spread of disease.” [1]

Although the authors don’t specify which method(s) of control they consider preferable, it’s safe to assume TNR is probably off the table. Consider, for example, Horn’s description of cats as “invasive” and his recommendation that “management steps need to be taken in regards to this species, despite the social and political controversies that surround it.” [2] For Horn and his co-authors (and many of their colleagues in the conservation community), the “management” category seems to include almost exclusively lethal methods.

Of course, anybody proposing the killing of this country’s most common companion animal on an unprecedented scale,* ought to provide some solid evidence—and, while we’re at it, at least one feasible funding mechanism—to advance the necessary public policies. But a review of Horn’s data reveals a number of problems, raising serious questions about the validity of his conclusions and justification for his recommendations.

In “Home Range, Habitat Use, and Activity Patterns of Free-Roaming Domestic Cats,” Horn (then a graduate student in the University of Illinois’ Department of Natural Resources and Environmental Sciences) and his co-authors describe the research he conducted for his master’s thesis, radio-tracking the movements of 24 unowned cats and 18 owned cats across the “outskirts of Champaign-Urbana” over the course of a year. Using the common 95% minimum convex polygon method, the authors report the following mean (i.e., average) estimated home range values:

The observation that unowned cats wander farther than pet cats is hardly news. Summarizing 19 studies on the subject, researchers have suggested that the size of a cat’s home range tends to be smaller when food is plentiful and the source localized (e.g., the regular meals provided for our pets); when food is scarce and widely distributed, on the other hand, a cat’s home range tends to be larger. [3]

But anybody familiar with the subject knows that mean is the wrong statistic to use since the distribution of home range values tends to be a highly skewed distribution, nothing like the familiar bell curve of a normal distribution. Many cats have relatively small home ranges, while a relative few travel much farther. For such distributions, means (or averages) overestimate the “central tendency” we expect from such a statistic—sometimes to a considerable degree. Indeed, by using means instead of medians (shown below) Horn inflated the “average” home range of unowned male cats by 326 percent:

Such errors can have serious consequences, of course—as when “information that is important for making decisions on controlling cat populations” [1] hinges largely on one grossly inflated statistic.**

“Data” Is a Four-letter Word

Readers of the JMW article would never know the extent of this statistical error—assuming they recognized it to begin with—since he merely reported four means shown above. But it’s immediately apparent from even a cursory review of the estimates for each of the 27 cats for which useful data were available (included in the appendix of Horn’s thesis). In fact, Horn himself comments on it, noting, for example:

“Three of the six unowned males, including the neutered individual, had annual home ranges less than [24.7 acres]” whereas “the other three male unowned cats had home ranges considerably larger (214, 703, and 1,352 acres)…” [2]

Before computing descriptive statistics, it’s important to know just what sort of distribution one’s describing. Horn should have known. Or at least it should have been brought to his attention by his academic advisors, co-authors, or the paper’s reviewers (another failure of the highly acclaimed peer-review process).

In any case, the skewed nature of the data is immediately apparent from a simple histogram. 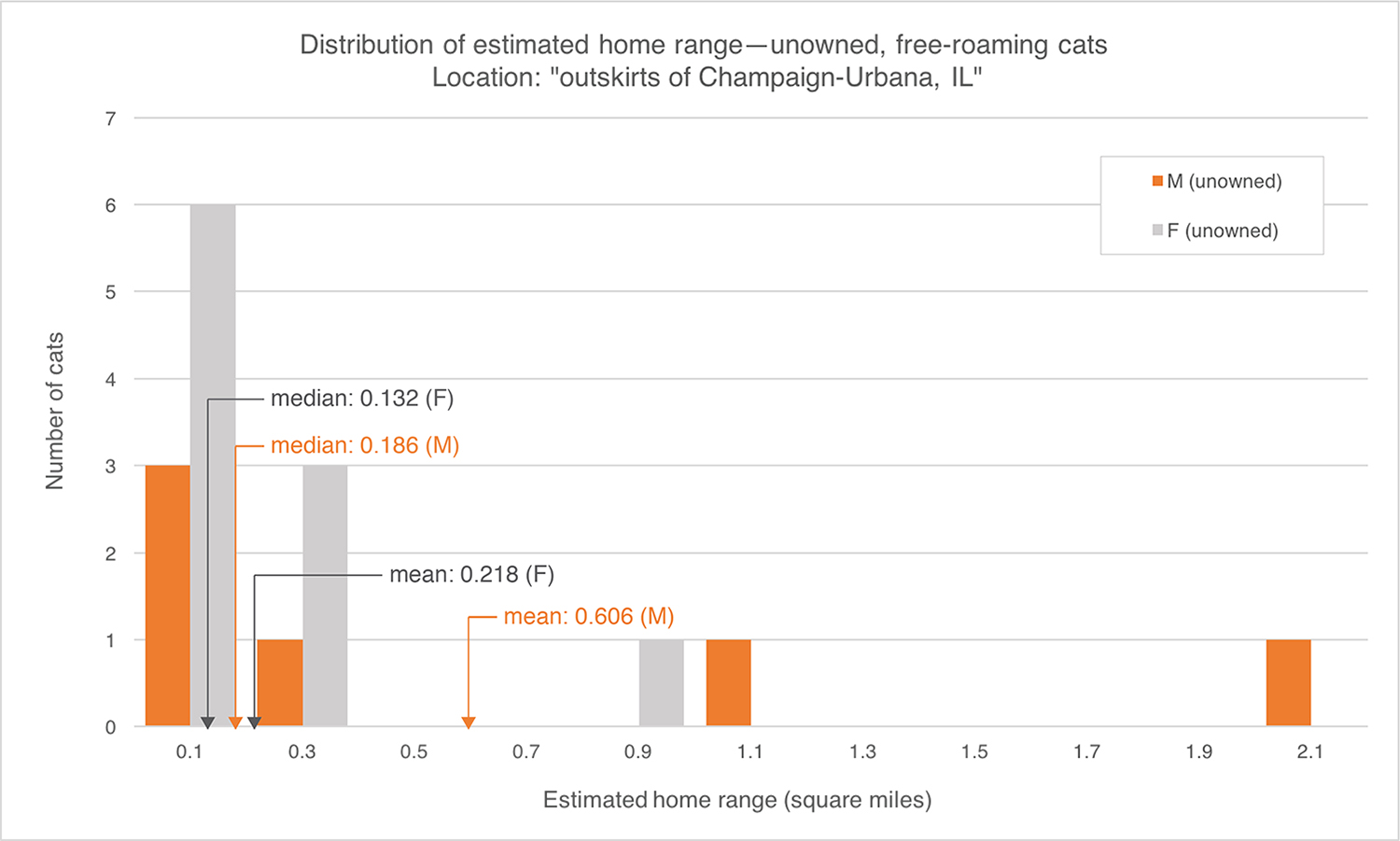 But again, JMW readers didn’t have access to this data. And it took an Illinois Freedom of Information Act request for me to get my hands on it. (Horn’s research was funded by taxpayers, via the Illinois Natural History Survey, the University of Illinois Department of Natural Resources and Environmental Sciences, and University of Illinois Extension.)

After a cordial e-mail exchange, Horn eventually responded as follows:

“I did hear back from my co-authors. We have decided not to share the data at this point. It was a very small sample size that were fixed and it was not at all the research question so it would not shed any light on the topic. We certainly would encourage further study on the topic though.”

It’s true: the sample size was very small. And the comparison of home ranges among sterilized and unsterilized cats (the subject of my original inquiry) was not the focus of Horn’s research. Still, a very small sample (i.e., just six unowned male cats) didn’t prevent him from publishing his results—making some sweeping conclusions and potentially dire recommendations.

And Horn seemed excited about the work when he was interviewed by the Illinois News Bureau in 2011, boasting, “There’s no data set like this for cats.”

So why not simply share the data I asked for—which was, after all, included in his thesis? Perhaps the answer has less to do with Horn’s sample size and more to do with who was making the request, as his e-mail exchange with co-author Edward Heske suggests. 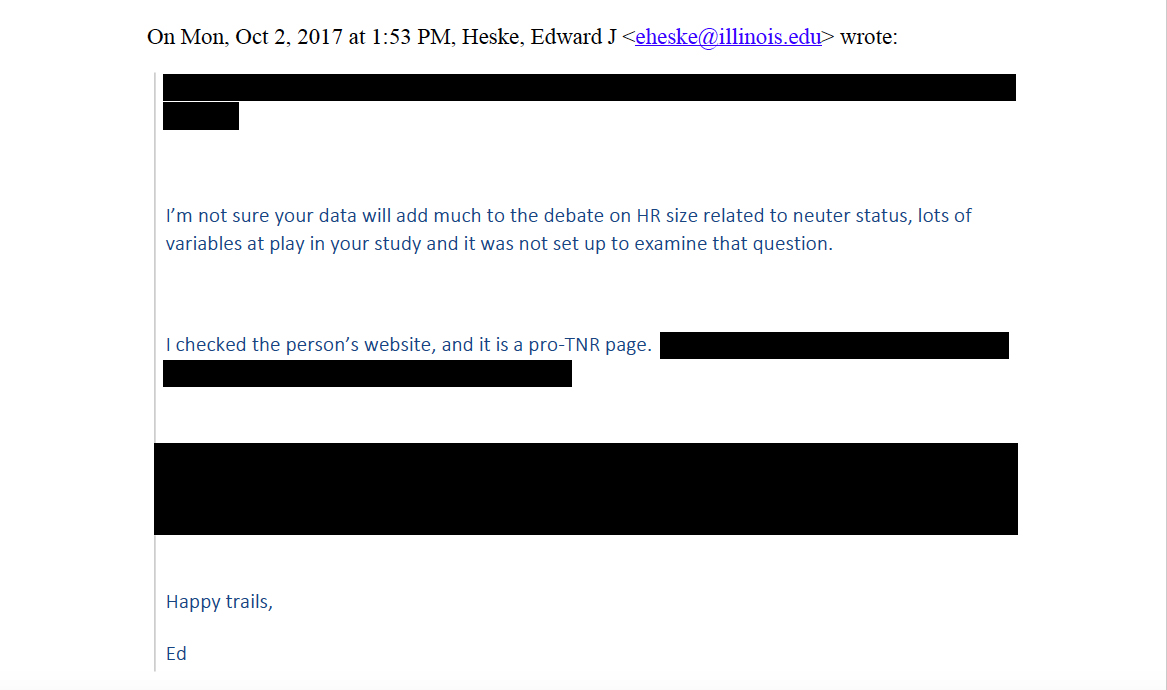 I can only imagine what’s been redacted.

* This seems to be precisely what they’re doing, even—or maybe especially—when they’re using all the familiar double-speak, euphemisms, and dog-whistles.

** I think I’m being generous here—setting aside, for example, Horn’s very small sample size of unowned male cats, his emphasis on these cats (assuming, without the burden of evidence, that they’ll “have more widespread impacts on potential prey species and greater likelihood of spreading diseases like toxoplasmosis” [1]), and more.

2.        Horn, J. A. Home Range, Habitat Use, and Activity Patterns of Free-Ranging Domestic Cats. Master of Science in Natural Resources and Environmental Sciences, University of Illinois at Urbana-Champaign, 2009.

More attempts by you – a spoon designer with no background in science – to discredit ACTUAL science because it contradicts your agenda to legitimize free-roaming outdoor and feral cats. You just don’t seem to get it, Peter, that some people just don’t want these invasive vermin running around killing wildlife, defecating in gardens and playlots, spreading disease, or destroying property. You think kitties are “cute” and so everybody should just accept them, because propagating cats is your hobby. What an entitled, demented worldview. Good Luck, Pete. The only people that seem to take you seriously are your posse of mentally ill middle-aged cat ladies.

Which portion of my analysis do you disagree with, exactly?

A humanely euthanized feral cat has no range at all and kills nothing further. The trick is to trap as many feral cats as possible in a short time, so you aren’t leaving any breeding cats out there, and remove any artificial food sources (such as your own pets food), which should be indoors only. I trap and remove anytime I see feral cats on my property. With this system I removed 14 in a few weeks and now ten years later see only one cat about once a month. I think it is the same cat and I’m afraid it is quite trap savvy, walks all around the trap, but never goes in. He has an ear tip. Kitty cam studies have shown that 44% of well fed owned cats still kill wildlife. A euthanized cat kills no more wildlife, doesn’t reproduce, doesn’t spread parasites. In our situation, the 14 removed cats weren’t replaced by 14 more cats, but rather, the only cat remaining is ear tipped.

In response to Tony’s comment, please explain what ACTUAL science was used in study referenced above. Also, you seem to know a lot about a person and his agenda for someone or something you don’t believe in… On the internet, we call that a TROLL. Just because you don’t like cats, you feel that they are vermin and should be eradicated. Personally, I think people who troll others on the internet are vermin and should be eradicated but then I don’t go around pushing my beliefs onto others.

But I digress… You would think that Horn would be all for the concept of community cats. If someone is feeding these cats regularly then they wouldn’t be out roaming around trying to find small mammals and birds to prey on.

Well, I don’t have a degree in science but I’m also not a “mentally ill middle aged cat lady” so hopefully my two cents is still heard. I think Peter’s analysis here is valid. It seems generally in studies unrelated to roaming cats, there’s a bigger pool for the subjects. I also feel saying anyone on the pro TNR side of things is doing so to push cute kittens down people throats is a little much. There’s so much unbiased data around TNR and the effect it has on the amount of tax $$$ spent in municipal programs and wildlife. There’s a big problem in our country with the overpopulation of unwanted cats on the streets. Peter offers part of the solution in TNR, which if you’re a cat person or not is a move in the right direction.

J van de Woestijne: When you say “trap and remove,” I assume you mean that these cats are killed? If so, are you suggesting this is a feasible means by which to address the larger issue? The science and public opinion suggest quite clearly this is not the case.

J van de Woestijne: Re the one cat you refer to with ear tip (or rather without.) This clearly proves that this cat has been de-sexed, so you have no need to worry about this cat breeding. Just in case you were unaware of this.

I am amazed at the rudeness of people on comment pages generally, but this is really awful–Tony calling smart inquiring people middle aged mentally ill cat ladies–shame on Tony. Also, Vox seems to be adding to CITIZEN SCIENCE — which most bird advocates call for and rely on, so it seems relevant to have such sites as this–to add to the important need for scrutiny in science. And by the way I AM A SCIENTIST and do understand research- here is what I will add to the review of the data and methods used in this study: 1) a minimum of 12 cases is typically needed for even a remotely sound use of parametric statistical techniques (study fails on this front); 2) there are no controls for whether or not the cats are related-cats roam less when tolerated by their own relatives. Also no control for feeding or not of those cats going on in ecological context; and 3) how do they know if there were or were not other cats in the vicinity? Controlling for level of competition in the environment seems vital for sound research on range and hunting practices. Just saying–this is a really poorly designed and executed study. Should not have been published because these methodological errors make the study useless in terms of predictive or even descriptive ability. Sad.