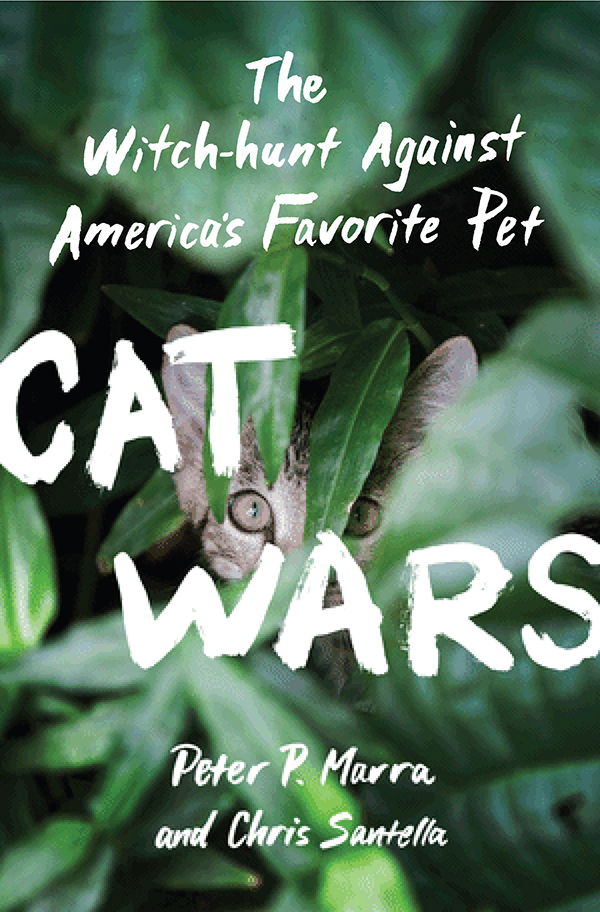 It’s hunting season, a fitting time for Peter Marra to be reiterating his call for the killing of outdoor cats. Earlier this week he delivered the keynote address at the annual conference of the Ohio Community Wildlife Cooperative, and tonight he’ll be in Baraboo, Wisconsin, presenting “Cats, Birds and You: Keeping Cats Indoors.”

This latest stop on Marra’s Extermination Nation tour is a homecoming of sorts. It was at the nearby University of Wisconsin–Madison, in the early 1990s, that the modern witch-hunt against outdoor cats began with the infamous Wisconsin Study. Using little more than cocktail napkin guesswork, UWM professor Stanley Temple and graduate student John Coleman “estimated” that outdoor cats killed up to 219 million birds in rural Wisconsin alone. [1] Although Marra’s “estimates” are significantly higher, his (flawed) methods—and motive—are striking similar to Temple’s.

(Fun fact: The two were among 10 authors—including Nico Daphiné, Marra’s former post-doc, who was forced to resign after she was found guilty of trying to poison cats—of a 2010 letter calling for conservation biologists to “counter trap-neuter-return.” [2])

Nearly eight years later—and faced with more pushback than he’d apparently expected—Marra’s still reworking his message for mainstream audiences. Look past the media-friendly rhetoric* and cowardly back-pedaling, though, and his call to action (just like Temple’s) is unchanged: the killing of cats on an unprecedented level.

More of the Same

According to a recent story in the Baraboo News Republic, Marra’s continuing to push his “cats indoors” agenda for pet cats and “management policies” for unowned, free-roaming cats.

“In those cases, we need to make sure we’re managing those populations properly, which means not only trapping, neutering, sterilizing and vaccinating, but making sure those numbers are indeed going down over time. We need to make sure that they’re not dying in inhumane ways, and making sure that they’re not continuing to negatively impact wildlife.”

Setting aside for the moment Marra’s alleged “concern” for the welfare of these cats (recall that he had very little to say on the subject during Dauphiné’s trial), he’s already made it quite clear that he finds even well documented TNR success stories unpersuasive. In Cat Wars, for example, he goes out of his way to dismiss a frequently cited study in which a campus TNR program resulted in a 66 percent population reduction over 11 years, [3] faulting the study for “combin[ing] two different approaches—TNR and TNA (trap-neuter-adopt)—which blurred the researchers’ ability to carefully assess the efficacy of TNR alone” and doubting the researchers’ ability to accurately count the cats on campus. [4]

Even his insistence that colony sizes must decrease over time is more than a little dubious. After all, to hear Marra tell it, we are currently experiencing an “explosion in the number of free-ranging cats wandering America’s urban, suburban, and rural landscapes.” [4] In which case, even a modest reduction in the growth rate would be an improvement.

Birds of a Feather

Having heard from a few readers who’ve attended Marra’s talks, I expect there will be some in the Baraboo audience eager to challenge his “science” and duplicitous policy recommendations. But Marra seems to have a staunch ally in his host, Bryan Lenz, director of Bird City Wisconsin. Quoted in the Baraboo News Republic, Lenz betrayed his ignorance on the subject of outdoor cat management:

“It’s a little frustrating because if somebody says fix climate change or fix habitat loss, they’re really hard, really complicated problems,” Lenz said. “But if somebody says, ‘Fix cat predation on birds,’ you keep your cat inside, and you stop feeding feral cats. We know the answer, and it doesn’t cost money either.”

Perhaps Lenz ought to pay a visit to Antioch, California, one of many U.S. communities where feeding bans have—for reasons that are utterly obvious—failed miserably. “Opponents of the ban have simply ignored it without much consequence,” explained a December 2014 news account, “while city officials admit they don’t have the resources to enforce the law.”

Or consider the cats eventually eradicated from Marion Island (just a little larger than Madison) who were never provided handouts—the island being uninhabited. And still, it took 19 years to exterminate an estimated 2,100–3,400 cats, using feline panleukopenia, poisoning, hunting and trapping, and dogs. [5] During the final phase of the project, 30,000 day-old chicken carcasses were injected with the toxin sodium fluoroacetate (also known as Compound 1080) and distributed across the island. [6] (In an ironic twist, the island later became overrun with mice, threatening the very wildlife whose protection was used to justify the lethal control of cats.)

Spend a little time digging into the issue, and it becomes clear: this, too, is one of those “really hard, really complicated problems.” Not that Lenz is likely to hear that from Peter Marra, of course.

* Made all the easier by a mainstream media suffering from a pernicious lack of curiosity.

Want to read another study that uses even less than “cocktail napkin guesswork”?? It looks like it was smeared on a wet-bar with a tube of lipstick, it was so bad.

Nothing but a pile of guesswork with no credible evidence, nevermind it having zero peer-review. I love the parts where they keep saying the documentation was lost amongst all the other excuses they use for having zero facts. Not even their estimates are valid.

This part had me rolling on the floor in stitches.

“To reach an informed consensus among free-roaming cat management stakeholders, it is important to compile quantitative assessments derived from TNR program data that have been recorded consistently over time.”

And then they go on to say that’s not needed, and especially not for this “research” of theirs. ROFLMAO!!

Funnier still, some uneducated idiot presented this opinion-piece drivel as proof of TNR working to the Board of Fish & Game at Alaska’s recent hearings on trying to get laws passed to allow TNR. They were laughed at!!! LOL

I can see why you prefer to remain anonymous.

If Marra & other cat hating miscreants want to eradicate the species responsible for decimating birds/wildlife, they need to put on concrete shoes and jump off a bridge, because HUMANS are the problem

Thank you for this site! I will be sure to return!