In what I can only imagine was intended to be a dramatic headline, the Washington Post announced last week: “A wildlife rehab center confirms that cats are killers.” Did we really to confirm that domestic cats are, just like their wild relatives, predators?

What’s next? A Sunday magazine feature investigating the presence of gravity, perhaps? Or a three-part series, complete with online photo gallery, on heliocentrism? We can only hope. In the meantime, what exactly did this wildlife rehab center learn about the hunting habits of outdoor cats?

The authors of “Free-roaming cat interactions with wildlife admitted to a wildlife hospital” (available online) studied patient admissions data from the Wildlife Center of Virginia over an 11-year period, which show “that free-roaming cats substantially contribute to admissions in a wildlife rehabilitation hospital.” [1] In particular, “cat interaction was the second leading cause of admission for small mammals (14.8 percent) and the fourth leading cause of small bird admissions (13.7 percent).” [1]

To their credit, the authors (of whom, three of four are WCV staff) were careful to define cat interaction as “any case where the rescuer observed a cat and the injured wildlife together resulting in admission for medical care” [1] Cases in which “the rescuer suspected cat interaction or where there was medical suspicion of a cat interaction without documented history” were classified as “unknown cause of admission.” [1, emphasis mine] Doing so eliminated an important potential source of bias. (Co-author Ed Clark, WCV’s president and founder, is an outspoken critic of outdoor cats and TNR. It’s not unreasonable to think that his staff, and many of the people bringing in animals, are therefore inclined to suspect cats.)

The trouble is, admissions alone don’t actually tell us much about the impact of outdoor cats (or any other cause of admission, for that matter) on wildlife.

Lead author Dave McRuer, WCV’s director of veterinary services, and his colleagues argue that their “data are conservative indicators of cat interactions with wildlife because admission to rehabilitation facilities necessitates that injured wildlife be observed by humans who then seek medical assistance.” [1] They fail to acknowledge, however, that merely observing a cat together with an injured animal is insufficient to determine with any certainty whether the cat initiated the event that led to the injury.

A bird stunned after colliding with a window, for example, might end up “caught” by a cat with terrible hunting skills. The same can happen with chipmunks and rabbits exposed to pesticides. “Cat interaction” is not the same as “cat-caused.”

Indeed, “cat interaction” is itself a flawed metric. The implication from the paper’s authors is clear enough: the numbers observed at WCV are simply too high. But what would it mean if cat interactions were reduced to, say, zero? It could mean that no cats are hunting small mammals and birds.

Or it could mean that no prey escaped the cats—which, presumably, WCV wouldn’t consider a desirable outcome (and not just because there would be no cause for a published paper and related media exposure).

Most problematic, though, is the authors’ failure to acknowledge that many of the animals caught by cats are part of what’s often called the “doomed surplus.” Although McRuer and his co-authors concede that “it is possible to obtain statistically significant results that have no ecological meaning” from their dataset, and warn that “it is not appropriate to use these incident data to assess trends at the population level,” [1] the WCV website portrays their results rather differently: “The study graphically illustrates that cats, when allowed to roam freely outdoors, are taking a terrible toll on wildlife.”

Terrible toll? Sounds like WCV is—despite their staff’s own warnings—assessing trends at the population level.

In fact, there’s been some very compelling research (ignored or overlooked by McRuer and his co-authors) demonstrating that cats (like all predators) tend to prey on the young, the old, the weak, or unhealthy. At least two studies have investigated this in great detail, revealing that birds killed by cats are, on average, significantly less healthy that birds killed through non-predatory events (e.g., collisions with windows or cars). [2, 3]

The Royal Society for the Protection of Birds has pointed this out for years now, most recently in response to the absurd “estimates” featured in Cat Wars:

“Cats do kill a large number of birds and small mammals in the U.K. every year. However, there’s no evidence that predation by cats is the main cause of decline for any species of British bird.”

And, contrary to what’s implied on the organization’s website, WCV’s review of 11 years of admissions data hasn’t produced any such evidence either.

What the Evidence Does Say: Mammals

Two species—the eastern cottontail and eastern gray squirrel—make up 84 percent (65.4 percent and 18.6 percent, respectively) of the 1,649 “cat-caused” mammals admitted to WCV from 2000 through 2010. If, as Clark suggests, outdoor cats are taking a “terrible toll” on these animals, then there should be ample evidence.

According to the Virginia Department of Game and Inland Fisheries, eastern cottontail “populations have declined over the past fifty years or so” due largely to habitat loss, though “these habitat changes have likely been exacerbated by increases in the cottontail’s important predators.” (Over this same period, the human population of Virginia has increased about 84 percent.)

So, are cats “important” predators of these rabbits? DGIF doesn’t think so.

Foxes and bobcats seem to be the cottontail’s most significant predators. But the complete list is lengthy: coyotes, dogs, cats, minks, raccoons, skunks, weasels, a number of avian predators (e.g., owls, hawks, and even crows), and “highway mortality can be severe in some places.”

Hunting, too, “can be a significant mortality factor, depending upon the intensity and timing of the harvest.” In Virginia, hunters are permitted to kill six cottontails daily for four fall/winter months. By contrast, WCV sees about eight “cat-caught” cottontails annually. (Although Clark objects to the use of lead ammunition, he doesn’t seem to object to hunting itself.)

It would, under the circumstances, be quite a stretch to suggest that the state’s outdoor cats are making a dent in its population of eastern cottontails. And the story is very much the same for the eastern gray squirrel.

What about for birds?

What the Evidence Does Say: Birds

The most common species of bird brought to WCV is, by far, the American robin—whether “cat-caught” (roughly two each month, on average) or otherwise. Are cats taking a “terrible toll” on these birds? North American Breeding Bird Survey data suggests that they’re not.

The population of American robins in Virginia is stable, from 1966 through 2013 (the most recent BBS data available), and increasing slightly nationally (see Figs. 1 and 2, below). And the situation is largely the same for the Northern cardinal, No. 4 on WCV’s list of “cat-caught” birds. 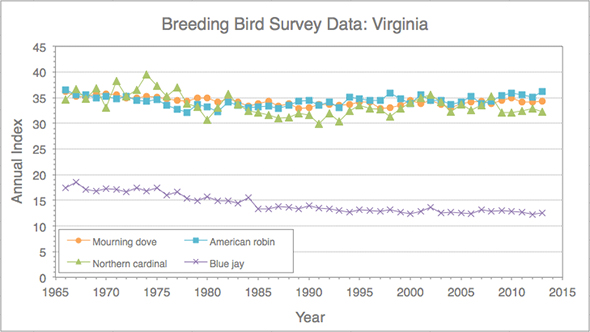 The situation is only a little different for mourning doves, the second most common “cat-caught” bird seen by WCV staff (ignoring for the moment the “unidentified passerine” category). This species has seen a very slight decline in Virginia over the past 50 years, with about a 15 percent decline nationally.

According to the Cornell Lab of Ornithology, “mourning doves seem to do well in the face of hunting pressure”—with hunters taking as many as 20 million annually—“they also face the less visible problem of lead poisoning.” 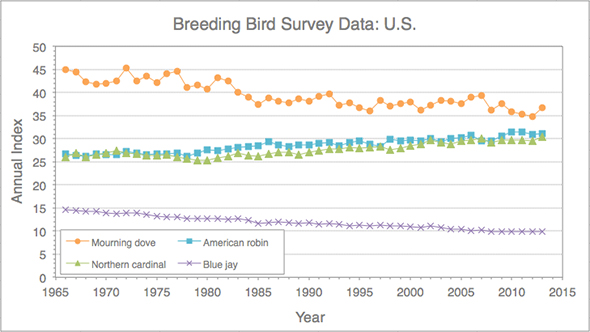 Of the top four bird species—which together make up nearly half of “cat-caught” birds seen by WCV—the blue jay is perhaps the only one likely to set off alarm bells, with BBS data showing declines of approximately 24 percent in Virginia and 29 percent nationally over the past 50 years.

Still, with WCV “cat-caught” admissions at fewer than one per month on average—and a Partners In Flight estimate of 13 million blue jays in the U.S.—it would be misguided to blame cats for any population decreases. Even more so when one considers that the number of pet cats in this country has increased more than 300 percent in the past 50 years. [4-6] Even accounting for the increasing proportion of cats kept indoors, [7] something the paper’s authors ignore, there are more pet cats outdoors today than when the BBS survey was started in 1966.

It’s worth stepping back a minute from the data to consider carefully what Ed Clark and his co-authors are asking the public to believe—and then try to reconcile that with all of the contradictory evidence.

If, as Clark claims, cats “are taking a terrible toll on wildlife,” then how are we to explain the increasing populations of American robins and Northern cardinals over the past 50 years—during which the number of pet cats outdoors has also increased? Or even the declines seen in other species—in light of all the other well-documented factors involved (e.g., habitat loss, hunting, etc.)?

Clark’s holding up this paper, published in The Journal of Wildlife Management, as a smoking gun. It’s nothing of the sort. Indeed, as the bibliography alone tells us, the study has little to do with science at all. Like so many rehab stories, it’s really all about PR.

In the News, Research Protocol, Threats to Wildlife