For too many in Hawaii’s conservation community, the answer is always the same—regardless of the question being asked. 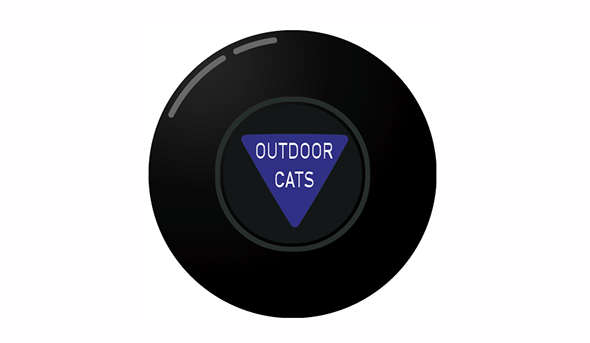 Examining the ongoing campaign to eradicate Hawaii’s outdoor cats, one soon discovers a familiar pattern: the rationale is often based on flawed science (often produced by government agencies). But, perhaps because of conservation concerns more desperate than those on the mainland, there’s an unsettling tendency to “interpret” scientific evidence in a way that will implicate cats regardless of a study’s actual results.

No matter what the research question, it seems the answer is invariably “cats.”

Witness, for example, a paper published earlier this year in the Journal of Wildlife Diseases, in which the authors suggest that outdoor cats pose a threat to Hawaii’s state bird, the Nene (or Hawaiian goose), by spreading the parasite Toxoplasma gondii. One problem: the island where the researchers found the greatest seroprevalence of T. gondii infection among the birds, Molokai, just so happens to be home to perhaps the most dramatic increase in their numbers in recent years.

In “Toxoplasma Gondii Antibody Prevalence and Two New Genotypes of the Parasite In Endangered Hawaiian Geese,” the U.S. Geological Survey’s Thierry Work and his co-authors document the results of blood tests for 94 Nene from three of the Hawaiian Islands: of the 42 birds from Kauai, nine (21 percent) tested positive for T. gondii infection, as did seven of 31 (23 percent) from Maui and ten of 21 (48 percent) from Molokai. Such results might appear striking, but as the authors acknowledge, their analysis “failed to detect significant differences in prevalence between islands, ages, or sexes.” [1]

Nevertheless, Work and his co-authors suggest that outdoor cats are the likely cause of the higher infection rate they observed:

“A high prevalence in Molokai might be explained by the anecdotal observations of a consistently conspicuous presence of feral cats in that area compared to other sampling sites.” [1]

What’s the point of doing statistical analyses if insignificant results will be treated no differently than significant ones? And how credible are these “anecdotal observations” anyway? (After all, such evidence is routinely dismissed out-of-hand by TNR opponents.)

More important, how do we reconcile all this with the considerable success of the Nene relocation project on Molokai?

That’s right—in a 2011 report to the Hawaii Legislature (PDF), the state’s Department of Land and Natural Resources describes the reintroduction to the island’s Pu‘u O Hoku Ranch as “a tremendous success,” in large part because of “ongoing predator control.” [2] As it happens, this is the same location from which Work and his colleagues—two of whom are DLNR staff—collected blood samples during 2011 and 2012.

I asked Work about this apparent discrepancy via e-mail, and his response suggested that I might soon get to the bottom of this mystery.

“The observations of feral cats at the collection site for Molokai Nene was directly from one of my co-authors copied here (John Medeiros). By this e-mail, I’m also copying a colleague, Arleone Dibben-Young, who lives on Molokai and can also give you more up to date information on the status of feral cats on that island.  John Medeiros can speak directly to the report from Hawaii DLNR, because he works directly with the Nene reintroduction program in Molokai.”

However, despite my reply indicating that I was eager to hear from both Medeiros and Dibben-Young, neither of them responded to my inquiry.

Work and his co-authors acknowledge that, based on earlier research examining 300 Nene between 1991 and 2012, [3] T. gondii accounts for only about four percent of mortalities, but caution that “a low prevalence of clinical disease does not necessarily equate to minimal population impacts” because “infection with T. gondii may make them more susceptible to trauma… a major cause of death in nene.” [1]

Indeed, of the 300 birds examined, 70 mortalities (23.3 percent) were attributed to trauma; on Molokai, 10 of 29 (34.5%) were attributed to trauma. And, as the authors point out, there’s been some interesting research suggesting that Tasmanian pademelons “with T. gondii infection may be more at risk of being killed on the road than uninfected individuals” [4] (although no causal link was found).

These are hardly insignificant details.

Nevertheless, the obvious contradictions in DLNR’s messaging never surfaced in a recent Scientific American story (for which Work was interviewed) declaring cats a threat to the Nene’s recovery, and suggesting further—despite a lack of evidence—that infection rates are on the rise.

It’s a shame, really, this lazy (and unoriginal) habit of scapegoating cats—for all kinds of reasons. Not least of which is the fact that there are legitimate research questions that arise from the findings reported by Work and his co-authors. But as long as the answer is the same regardless of the question, why bother with the research (often funded by taxpayers) at all?

2. n.a., Report to The Twenty-Sixth Legislature Regular Session of 2012: Status of the Issuance Of Incidental Take Licenses for Endangered, Threatened, Proposed, and Candidate Species; and the Condition of the Endangered Species Trust Fund for the Period July 1, 2010–June 30, 2011, 2011, The State of Hawaii  Department of Land and Natural Resources, Division Of Forestry and Wildlife: Honolulu, HI.