Well, this must be awkward—for some, anyhow. In particular, the people who continue to overstate the threat of rabies, leveraging whatever fear they can muster in their ongoing campaign to undermine community cat programs and TNR efforts.

Awkward or not, though, it’s a fact: the number of cats testing positive for rabies in the U.S. declined for the second year in a row.

The 2013 data, compiled by the Centers for Disease Control and Prevention and published November 15th in the Journal of the American Veterinary Association, show a decline of 10 cases (3.9 percent) from the 257 cases reported in 2012—which represented a rather dramatic decline of 15.2 percent from 2011’s total of 303 cases.

“Cats have represented the majority of rabid domestic animals since 1992,” explains the CDC report, “however, there was a significant decrease in the number of rabid cats reported in 2013, compared with annual numbers reported in 2008 through 2012.” [1] In fact, the decrease is much more significant than the report’s authors suggest, as the following graph of CDC data illustrates: the number of rabies cases reported in cats hasn’t been this low since 1991, when cases in cats (and dogs) increased significantly due to an outbreak of rabies in raccoons in the Mid-Atlantic states. [2] 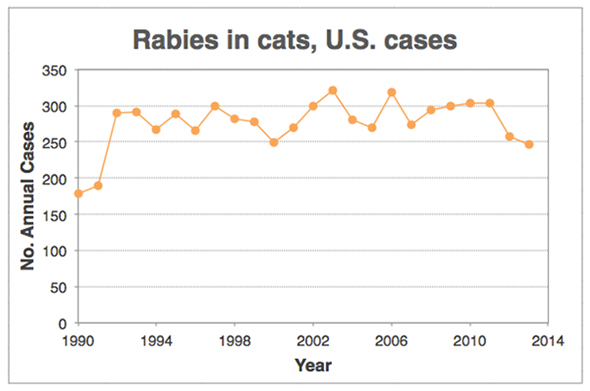 While it may be premature to call the recent decrease a trend, the data stand in stark contrast to some of the most basic assertions made by TNR-deniers. In a 2013 op-ed in The Baltimore Sun, for example, American Bird Conservancy president George Fenwick argued that TNR programs “may lead to increased, uninoculated populations of cats that can serve as a source of transmittable, serious diseases.” [3] And, as I mentioned in my previous post, ABC’s Grant Sizemore is still using CDC’s 2011 rabies data in his 2014 presentation, Cats, Birds, and People: The Consequences of Outdoor Cats and the Need for Effective Management (PDF).

While Sizemore’s Report to Pompano Beach City Commissioners: The Science of Feral Cats (PDF), apparently submitted last year* in support of the ongoing killing there, doesn’t mention rabies, its executive summary begins with the assertion (unsupported, of course) that “the population of feral domestic cats continues to grow throughout the United States.” [4]

All of which suggests there ought to be more rabid cats out there. The data, however, suggest otherwise.

Is it possible that the data are reflecting the tens of thousands of community cats vaccinated every year (as part of the very programs ABC and others are trying to eliminate)? There’s no way of knowing for sure, but it at least seems like a question worth asking.

If the decline in rabies is awkward for ABC, it’s probably even more so for CDC epidemiologist Jesse Blanton, one of the co-authors of Rabies surveillance in the United States during 2013. Just last year, Blanton, whose name has been on these annual reports since 2008, teamed up with Fenwick and five others to co-author Rabies Prevention and Management of Cats in the Context of Trap-Neuter-Vaccinate-Release Programmes—an indefensible misrepresentation of the science (intended, obviously, to undermine TNR).

Here, too, the various claims (often based on cherry-picked studies) suggest there ought to be more rabid cats out there—perhaps many more. And yet, the CDC reports—with Blanton’s name on them—paint a rather different picture.

And it doesn’t end with the number of cases reported, either. Perhaps even more interesting is this most recent report’s summary of vaccination history:

Unfortunately, the report provides no additional breakdown regarding how many of those 441 cats were not up-to-date on their rabies vaccine. It would be interesting to know, especially in light of what Blanton, Fenwick, and the others wrote last year:

“While feral cats in managed colonies live far shorter lives on average than indoor cats, many can live at least six years, [5] and therefore, one vaccine dose does not necessarily offer lifetime coverage.” [6]

Granted, the CDC report isn’t suggesting these cats had “lifetime coverage.” Nevertheless, the data seem, once again, to contradict the claims made by those suggesting that the threat of rabies is too great to permit community cat programs and TNR. Isn’t science supposed to be about reconciling such contradictions?

I told you it was awkward.

* The report is undated.