Complaining of the impacts of free-roaming cats on wildlife and the environment, along with a range of public health threats, dozens of veterinarians in Hillsborough County, Florida, have banded together to fight TNR. Evidence suggests, however, that their real concern has nothing to do with the community, native wildlife, or, indeed, with cats. What the Hillsborough Animal Health Foundation is most interested in protecting, it seems, is the business interests of its members.

In Part 3 of this five-part series, I discuss some of the science surrounding Toxoplasma gondii, and challenge HAHF’s claim that TNR increases the exposure risk for toxoplasmosis.

Cats and Toxoplasma gondii
As recently as last week, the Hillsborough Animal Health Foundation was insisting that cats are the only source of Toxoplasma gondii—essentially that without cats, there’s no toxoplasmosis. It looks like they’ve done some editing in the past few days, and the particular statement I’m recalling has been removed.

In any case, it’s not quite that simple.

It’s true that cats are the only known definitive host—the T. gondii parasite reproduces in the small intestines of an infected cat and, in some cases,* oocycts are then passed in the cat’s feces. “Shedding oocysts” typically occurs only once in a cat’s lifetime, and lasts only about a week. [1]

These oocysts—“a hardy, thick-walled spore able to survive for lengthy periods outside a host”—are initially non-infective, but become “infectious outside the cat within 1–5 days depending upon aeration and temperature.” [2] Although congenital transmission of T. gondii can occur in cats, it’s rare. “Most cats become infected with T. gondii post-natally, by ingesting either infected tissues or sporulated [infectious] oocysts.” [1]

Although only about 100 Florida panthers remain in the state, Florida’s bobcat population was estimated to be 303,338 in 2009. [4] (While HAHF is concerned that “domesticated cats can spread Feline Leukemia to the Florida Panther, one of our most endangered species,” they fail to acknowledge this cat’s probable role in T. gondii transmission.)

Other animals (humans included) also become infected by ingesting either infected tissue or infectious oocysts, as indicated in the diagram below (from [2]). 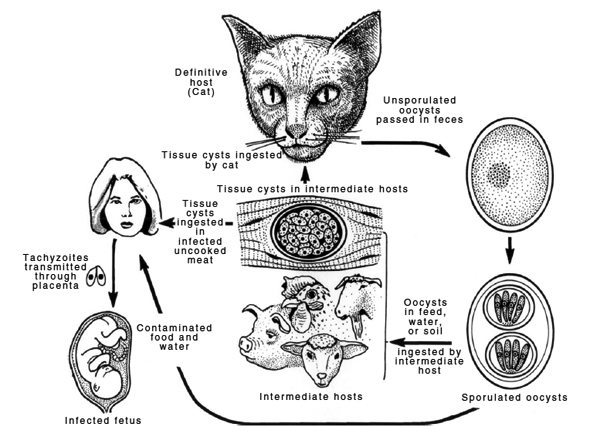 Contrary to what HAHF implies, the role of the intermediate host can be considerable in T. gondii transmission. “Wildlife carcasses left unattended and viscera from game animals,” for example, “are a source of infection for free-ranging domestic cats and for other wild felids.”

“Millions of deer and bears are hunted annually in the USA and there are many thousands of bobcats and cougars that may have access to these carcasses. A single felid can excrete millions of oocysts and thus can rapidly contaminate the environment which may lead to infections in many other hosts.” [5]

In some contexts, the role of cats is almost non-existent. Studies have documented extensive infection among, for example, arctic foxes, Svalbard reindeer, sibling voles, walruses, kittiwakes, barnacle geese, and glaucous gulls in the Arctic, “an ecosystem with very few cats.” [6] And researchers studying T. gondii infection in polar bears concluded: “It would… be inconceivable to assume that the few cats would play a major role in the epidemiology of T. gondii in the vast high Arctic.” [7]

And while congenital transmission in cats is uncommon, the opposite has been demonstrated in a “wild population of mice,” where high levels (75 percent) were observed—prompting researchers to conclude “that this phenomenon might be more widespread than previously thought.” [8] Infections in sheep also point to congenital transmission, which “may be more important than previously considered.” [9]

So, although felids are the only known definitive hosts, it’s not difficult to imagine a very active life cycle continuing without the “participation” of domestic cats.

“While rabies is easily understood… toxo is far scarier… THAT parasite is why we are worried!”

If T. gondii is far scarier, it’s due in no small part to the efforts of TNR opponents and a mainstream media eager for sensational headlines. That said, Thompson’s right when he points out that toxoplasmosis is among five diseases the Centers for Disease Control and Prevention has declared “Neglected Parasitic Infections… targeted by CDC as priorities for public health action.”

Surveillance data from Florida suggest that toxoplasmosis infection rates have decreased somewhat over the past 10 years. According to the 2009 Florida Morbidity Statistics report:

Interestingly—and in contrast to what HAHF implies (“a large burden of the risk lies against our precious children!”)—the greatest risk for toxoplasmosis is among adults 25–44 years of age. 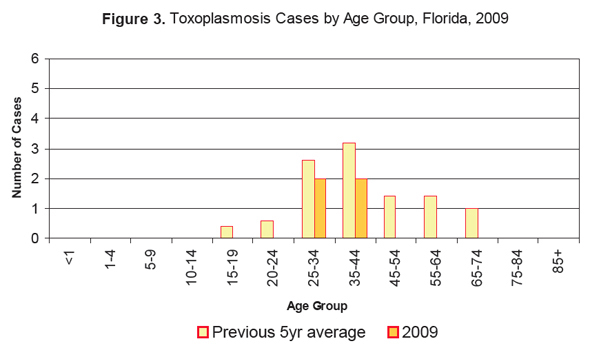 But again, it’s not quite that simple.

Congenital Transmission
Cases of congenital toxoplasmosis can be very difficult to identify. The absence of such cases in Florida’s Department of Health data, therefore, does not necessarily mean that none exist.

“In the USA,” explain Dubey and Jones, “the most complete data on the rate of congenital infection comes from the New England Regional Newborn Screening Program, which serves Massachusetts and New Hampshire.”

“All infants born in the catchment area are screened for a variety of conditions including T. gondii infection. Of the 635,000 infants who underwent serological testing between 1986 and 1992, 52 were infected, resulting in an infection rate of approximately 1 per 10,000 births. Only two (4 percent) of these infants were recognized to have congenital toxoplasmosis before the screening results were known; however, follow-up examinations identified signs of disease in 40 percent of the infants (Guerina et al., 1994).” [1]

Now, according to Florida DOH reports, there were 214,519 live births in the state in 2010. If 1 in 10,000 were infected congenitally, that would account for about 22 cases of toxoplasmosis—though all of them may have been overlooked in the absence of routine serological testing.

Even so, it’s not at all clear that prohibiting TNR would reduce T. gondii infection—congenital or otherwise. On the contrary, such a policy is likely to have the opposite effect.

Toxoplasmosis and TNR
“Due to both incidence rates and clinical effects,” argues HAHF, “T. gondii alone is sufficient reason to stop conducting TNR, as it unwittingly contributes to the spread of T. gondii.”

But, as I pointed out in my previous post, HAHF’s real objection to TNR seems to have more to do with the potential use of tax dollars to support it than with any public health concerns.

In any case, even if TNR reduced the number of cats solely through the adoption of kittens, its impact would be significant—the likelihood of these kittens ever coming into contact with infected prey is virtually eliminated. (A similar—though, admittedly, reduced—effect is achieved via regular feeding of adults insufficiently socialized to be adopted; research shows that cats being fed hunt less than those without access to human provisions. [12–14])

It’s telling that HAHF’s concerns aren’t shared by some of the scientists closest to the T. gondii research. Jaroslav Flegr, whose pioneering research was the focus of a feature article in the March 2012 issue of The Atlantic, for example, shares his family home (Flegr is a husband and father of two young children) with two indoor-outdoor cats. Robert Yolken, an infectious disease expert at Johns Hopkins University, also a guardian of two cats, told NPR, simply: “the benefits outweigh the risks.” [15]

Citing the work of other researchers, whose work is described on the HAHF website, Thompson wrote in a recent e-mail: “Keep in mind these are human doctors writing and they could care less about feral cats or their control—they are simply reporting their research.”

Just as fascinating, though, is the stark contrast between their call to action—screening of pregnant women (which is standard practice in France) and/or the development of vaccines [16–17]—and that of the veterinary community represented by HAHF: policies that would lead to the killing of tens of thousands of unowned cats in Hillsborough County alone.

*Whether or not a cat actually sheds oocysts depends largely on which of the three different stages of T. gondii (tissue cysts, tachyzoites, or oocysts) is ingested. [2]