Thirty-three: that’s how many species of birds have been driven to extinction by feral cats. At least.

I’ve lost track of how many times I’ve stumbled across references to this figure over the past couple years. Not once, however, have I seen more than one species (usually the Stephens Island Wren, its story having been twisted into mythology over the years) mentioned as an example.

Which species? From where? Under what circumstances?

I seemed to be the only one interested in these questions. Indeed—as is often the case with such “facts”—the impact of the 33 extinctions reference increases the further it’s separated from its original context.

Recent Sightings
The most recent reference comes from Kiera Butler’s article in the July/August issue of Mother Jones. Domestic cats, Butler writes, are “responsible for at least 33 avian extinctions worldwide.” [1]

The authors of Feral Cats and Their Management, published last year by the University of Nebraska-Lincoln, qualified the role of cats somewhat: “While loss of habitat is the primary cause of species extinctions, cats are responsible for the extinction of at least 33 species of birds around the world.” [2]

Nico Dauphine mentioned the 33 extinctions in her now-infamous “Apocalypse Meow” presentation, and in her 2009 Partners In Flight paper, co-written with Robert Cooper: “Historically, cats have been specifically implicated in at least 33 bird extinctions, making them one of the most important causes of bird extinctions worldwide (Nogales et al. 2004).” [3]

In “A Review of Feral Cat Eradication on Islands,” Nogales et al. explain: “Feral cats are responsible for the extinction of at least 33 bird species. Insular endemic landbirds are most frequently driven to extinction.” [4, emphasis mine]

So we’re talking about islands? That’s no small distinction, as Fitzgerald and Turner make clear in their contribution to The Domestic Cat: The biology of its behaviour:

“Cats have become established within the last century or two on many oceanic islands that, by the nature of their origin, had very few if any mammals but possessed avian faunas that had evolved without mammalian predators. In these circumstances, cats have had severe effects, that were often combined with the effects of other introduced mammals and habitat modification.” [5]

In Search Of 33 Extinctions
As their source, Nogales et al. cite a 1994 book by Christopher Lever, Naturalized animals: The ecology of successfully introduced species, which in turn points us to a 1977 text:

“According to Jackson (1977), naturalized predators have collectively been responsible for the extermination throughout the world of no fewer than 61 avian taxa, the principal culprits being feral domestic Cats which have caused 33 extinctions, rats 14, and the Small Indian Mongoose nine. These are in addition to the numerous occasions of local extinctions.” [6]

Now we’re getting somewhere. Jackson provides a bar chart illustrating the “Relative importance of causes of avian extinctions since 1600; data are summarized from Ziswiler (1967).” [7] 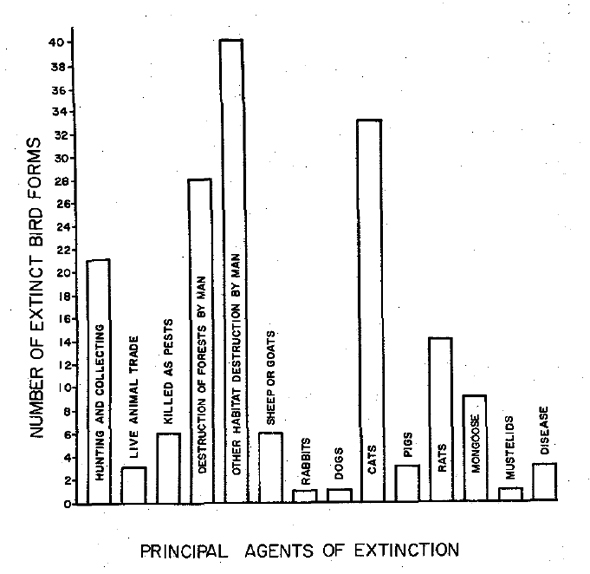 Now, a truly thorough search wouldn’t end with Ziswiler’s work—as he cites four additional sources. Nevertheless, Ziswiler provides what I was looking for: the various species that were driven to extinction, their location, and an approximate date.

And—just as important—the various other factors that acted in combination with predation by cats (which Ziswiler lists in what appears to be hierarchical order, though it’s not entirely clear).

That’s right: not only are these extinctions limited to island habitats, they typically involve two or three contributing factors. In fact, of the 33 extinctions tabulated by Ziswiler, only eight are attributed to cats exclusively (and it turns out some of those have been “overturned” in the 44 years since Ziswiler first published his list, as we’ll see shortly).

All of which is pretty difficult to reconcile with, say, Butler’s straightforward indictment: cats are “responsible for at least 33 avian extinctions worldwide.” [1]

Cats and Avian Extinctions
Of the eight extinctions Ziswiler attributes to cats alone, just two have stood the test of time: the Stephens Island Wren and the Macquarie Island kakariki (red-crowned parakeet), as described below.

Other Factors
Three of the other six cat-caused extinctions described by Ziswiler actually involve a host of factors, as revealed by 44 years of additional research

Natural Disaster
The case of the St. Christopher Bullfinch is intriguing in that cats may not have been involved at all.

Extinction Is (Not) Forever
Perhaps the most surprising finding, though, is that two of the species Ziswiler claims were driven to extinction by feral cats—the Aukland Islands rail and the Eyrean grass-wren—turn out not to be extinct at all.

Plenty of Blame to Go Around
The remaining 25 extinctions, while not as dramatic as some of those already mentioned, illustrate very well complexities generally lost to those who blindly cite the 33 extinctions (reason enough, they seem to argue, to outlaw the feeding of feral cats and TNR programs everywhere).

So, how many avian extinctions have cats caused? I don’t know.

Then again, neither do Butler, the authors of the UNL paper, Dauphine, or any of the others who suggest they do—and then use that “knowledge” to fuel the witch-hunt against free-roaming cats.

It’s funny how the same people who make so much noise about the U.S. population of pet cats tripling over the past 40 years (without acknowledging the increasing likelihood that these cats are indoor-only, of course) have demonstrated no interest at all in updating their island extinctions factoid.

Then again, they only rarely acknowledge the fact that the extinctions occurred on islands, or the fact that feral cats were just one of many contributing factors. In those instances where cats were involved at all—and where birds were actually driven to extinction.

Considering what these people are proposing—the wholesale killing of cats by the tens of millions—is it really too much to ask that they do a little more fact-checking and a little less Kool-Aid drinking?

3. Dauphine, N. and Cooper, R.J., Impacts of Free-ranging Domestic Cats (Felis catus) on birds in the United States: A review of recent research with conservation and management recommendations, in Fourth International Partners in Flight Conference: Tundra to Tropics. 2009. p. 205–219. http://www.pwrc.usgs.gov/pif/pubs/McAllenProc/articles/PIF09_Anthropogenic%20Impacts/Dauphine_1_PIF09.pdf