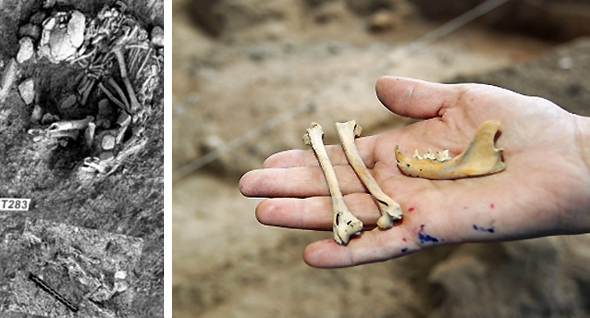 As reported in yesterday’s New York Times, the history of the domestic cat is being rewritten—yet again. (Whether this piece gets the same attention as Elisabeth Rosenthal’s “Tweety Was Right” story remains to be seen—and I, for one, am not holding my breath.)

Arrivals and Departures
For years now, there has been some debate surrounding the arrival of cats in North America. Some have argued that cats were brought over by the Vikings (which might explain the resemblance between Norwegian Forest cats and Maine Coons [1]), while others have suggested that cats first arrived with Christopher Columbus or—roughly 100 years later—with the original settlers of Jamestown. [2]

A 2009 article in Scientific American demonstrated the uncertainly surrounding this issue in one of its illustrations: “Americas: 500 years ago?” [2]

Recent research, however, is challenging such estimates in a big way.

Working in the New Mexican desert, a team of archaeologists was shocked to find evidence of what appear to be domestic cats dating back to the late Archaic Period (roughly 8000 to 2000 BC). This, noted one of the researchers, isn’t entirely unexpected—it’s generally accepted that cats “sort of domesticated themselves” in response to the rise of agriculture elsewhere in the world. [3]

Even there, the story has been changing:

“Scholars long believed that the ancient Egyptians were the first to keep cats as pets, starting around 3,600 years ago. But genetic and archaeological discoveries made over the past five years have revised this scenario—and have generated fresh insights into both the ancestry of the house cat and how its relationship with humans evolved.” [2]

Indeed, a 2007 paper in Science made headlines when the authors, using DNA evidence, demonstrated that “the earliest evidence of cat-human association involves their co-occurrence in Cyprus deposits determined to be 9500 years old.” [3]

Closer to home: just last year, a site in Peru revealed that cats were being domesticated 3,500 years ago in the country’s ancient Lambayeque region.

Name-Calling
All of which raises the question: What’s the difference between native and non-native species?

Well, if you’re a domestic cat, it might just be the difference between life and death. “The claim that the cat’s exotic status should count against it often is employed in policy arguments about cats as a conversation-stopper,” writes Cornell’s James Tantillo, “that the cat is an exotic ‘alien’ is supposed to trump all other values in the debate.” [4]

For TNR opponents, it’s the gift that keeps on giving:

Still, none provides anything by way of a definition or objective measure.

In his provocative 1998 essay, “Nativism and Nature: Rethinking biological invasion,” Jonah Peretti argues, “it is unclear how long a species needs to be established in a location before it is considered native. Is a species ‘naturalised’ in 100 years, 1,000 years, or 10,000 years? The distinctions are arbitrary and unscientific.” [6]

“Nativist trends in Conservation Biology have made environmentalists biased against alien species. This bias is scientifically questionable, and may have roots in xenophobic and racist attitudes. Rethinking conservationists’ conceptions of biological invasion is essential to the development of a progressive environmental science, politics, and philosophy.” [6]

Us and Them
The biases Peretti refers to are remarkably selective.

Where’s the outcry against honeybees, for example, which originated in South and Southeast Asia? “In many places,” suggests Mark Sagoff, “one can hardly imagine the landscape without alien species.” [7]

“Virtually everything down on the farm is an exotic: of all crops, only sunflowers, cranberries, and Jerusalem artichokes evolved in North America. Corn, soybeans, wheat, and cotton have been imported from some other land. Cattle came from Europe. Rockfish—or striped bass as they are known outside Maryland—are native to the Bay but have been introduced up and down the Atlantic and Pacific coasts for sport and commercial fishing. More than 90 percent of all oysters sold in the world are produced by aquaculture, and almost the entire oyster industry on the West Coast is based on a species imported from Japan.” [7]

Our very identities can be wrapped up in what is, in fact, alien, notes Sagoff. “Kentucky identifies itself as the ‘Bluegrass State,’ but bluegrass immigrated from England.” [7]

“…those who seek funds to exclude or eradicate non-native species often attribute to them the same disreputable qualities that xenophobes have attributed to immigrant groups. These undesirable characteristics include sexual robustness, uncontrolled fecundity, low parental involvement with the young, tolerance for ‘degraded’ or squalid conditions, aggressiveness, predatory behavior, and so on.” [7]

I don’t know if I’m willing to go that far—and yet the parallels are both undeniable and striking. (“Feral Cats and Their Management,” don’t forget, was still trying to sell the idea—debunked long ago—that “a pair of breeding cats and their offspring can produce over 400,000 cats in seven years” [8] as recently as late 2010)

“The exotic issue,” argues Tantillo, “raises the philosophical problem known as the ‘is-ought’ problem: form a descriptive statement of what is, it is logically invalid to conclude automatically from that fact to what ought to be the case without some type of intervening moral argument.” [4]

For many, what ought to be the case is the idyllic past—as exemplified in the Leopold Report, which lay out the vision for the country’s national parks:

“As a primary goal, we would recommend that the biotic associations within each park be maintained, or where necessary recreated, as nearly as possible in the condition that prevailed when the area was first visited by the white man. A national park should represent a vignette of primitive America.”

As Peretti points out, however, primitive America is not only irretrievable; it’s also a myth.

“It is assumed that Europeans found the Americas in a pristine, natural state. The goal of management is to protect and recreate native nature, before it was altered, invaded, and degraded by European culture and European biota. This perspective often relies on an idealised and patronising attitude toward Native Americans… Many anthropologists and archaeologists challenge the view that Native Americans lived in perfect harmony with nature. Rather, they assert that Native American hunters were responsible for the extinction of the bulk of the Pleistocene megafauna. By the time Europeans arrived, most of these native species had already gone extinct. [6]

Re-writing History?
So, what if cats were here long before Europeans arrived? What if the domestic cat has actually been—as these recent discoveries indicate—in North America for 4,000 or 5,000 years? Or 10,000 years?

This changes everything, doesn’t it?

Well, it might on any other day of the year. On April 1st, though, it changes nothing—because it’s simply an April Fools’ fabrication (though nearly all of the “supporting evidence” is, I hasten to point out, completely accurate).

Unfortunately, even if such news were true, it’s difficult to imagine it making the slightest difference to TNR opponents—for whom the whole non-native argument is neither biologically nor philosophically based. It’s simply a red herring.

Take that away from them, and they’ll just find something else.