Here’s a tip for those in the bird conservation community who persist in their witch-hunt against free-roaming cats: be careful what you wish for.

For several years now, the National Audubon Society and American Bird Conservancy have co-opted, twisted, and misrepresented any scrap of published science they could find—however indefensible—suggesting that such cats might have an impact on bird populations. And, as I’ve demonstrated time and time again, there’s an audience out there for such propaganda.

But what if their campaign has been too effective—with the wrong audience?

END_OF_DOCUMENT_TOKEN_TO_BE_REPLACED

If you missed this week’s Animal Wise Radio show, when I discussed the recent Ted Williams/Audubon incident—and how this fits into the ongoing TNR debate nationwide—with hosts Mike Fry and Beth Nelson, you can check the complete show in podcast format). An MP3 file (9.6 MB) of our conversation (approximately 21 minutes) is available here.

As always, many thanks to Mike and Beth—and everybody else who helps pull the show together—for having me on! 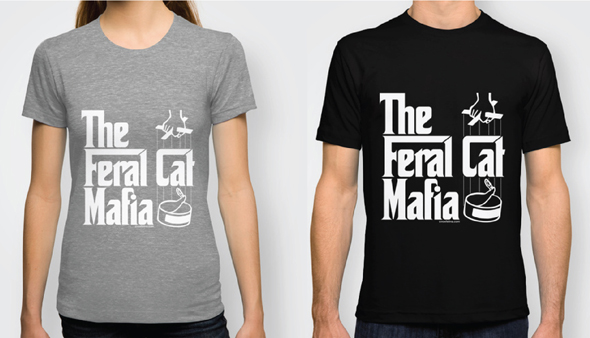 After three blog posts and several comments to online news stories, I thought it was time for a lighter response to the absurdity of recent events. And so, inspired by the comments of the dismissed-then-reinstated editor-at-large for Audubon magazine, Ted Williams, made in the immediate aftermath of his inflammatory Orlando Sentinel op-ed, I’m pleased to introduce* a line of Feral Cat Mafia products.

In addition to t-shirts ($22 each, available only in dark colors for now), there are hoodies, tote bags, and art prints available. Other items will be added shortly.

All proceeds will be donated to FixNation, one of the country’s most highly regarded TNR/low-cost spay/neuter clinics (upon whose board I proudly serve).

* With much help from two colleagues, whose design and technical skills proved invaluable.

Had David Yarnold waited just a few more days, the announcement might have been taken as an April Fools joke: Ted Williams is back.

“After doing the review we promised,” explained Yarnold, president and CEO of the National Audubon Society, in a blog post Tuesday, “which included extensive fact-checking and a look at Ted’s work for other publications, we’re satisfied that there’s no larger pattern of missteps that would warrant further disciplinary action.”

Just a week-and-a-half ago Audubon “suspended its contract” with Williams amidst a firestorm of complaints about an Orlando Sentinel op-ed in which he suggested that acetaminophen poisoning was one of “two effective, humane alternatives to the cat hell of TNR.”

No pattern of missteps? END_OF_DOCUMENT_TOKEN_TO_BE_REPLACED

It’s been a turbulent few days for Ted Williams. First, the editors at the Orlando Sentinel—who, it seems clear, were previously asleep at the switch—revised his op-ed, pulling the comment about Tylenol and changing his affiliation from “editor-at-large for Audubon magazine” to “independent column[ist] for Audubon magazine.” They also added a disclaimer: “His views do not necessarily reflect those of the National Audubon Society.”

As of Saturday morning, Williams was more independent than ever.

That’s when the National Audubon Society announced via Facebook that the organization “suspended its contract with Mr. Williams and will remove him as ‘Editor at Large’ from the masthead pending further review.” This comes in the wake of his inflammatory op-ed in Thursday’s Orlando Sentinel in which Williams suggested that acetaminophen poisoning was one of “two effective, humane alternatives to the cat hell of TNR.”

And although Williams will likely blame his dismissal (assuming Audubon won’t just wait until the smoke clears and then quietly bring him back on board) on the “feral-cat mafia,” as he describes us in one of his online comments to the story, the fact is he’s got nobody to blame but himself. END_OF_DOCUMENT_TOKEN_TO_BE_REPLACED