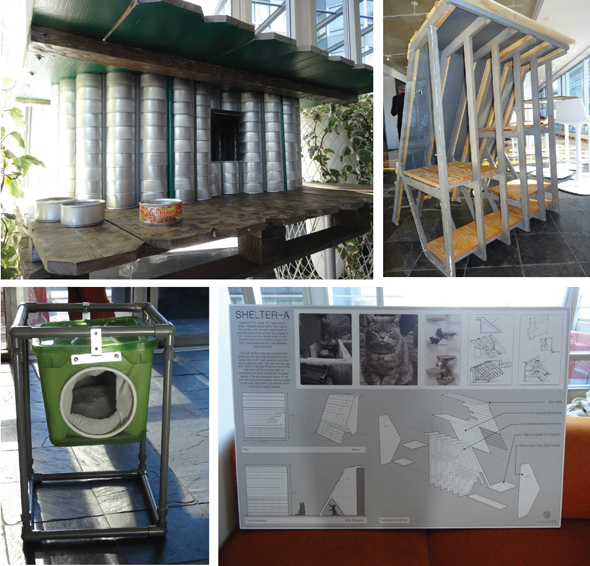 Unlike the Florida communities of Indian Harbour Beach and Pompano Beach, New York City allows—even encourages via the Mayor’s Alliance for NYC’s Animals—the ongoing care of stray, abandoned, and feral cats. And, thanks to Architects for Animals, some of these cats are going to be living in style.

Although, as New York Times Home & Garden writer Joyce Wadler observed, “not a single client was present” at Giving Shelter 2013, it was clear that participants in the competition “had taken pains to address the needs of the users.”

According to blogger Tamar Arslanian, the organizers “decided to have each design team meet with the feral caretaker who would ultimately receive the structure so that they could collaborate and ensure the shelters not only looked nice but were as functional as possible!”

Entries were also low-cost and mindful of a DIY/recycling aesthetic that would appeal to budget-minded caretakers (those other clients).

Tin Hut, for example, submitted by last year’s winner, Kathryn Walton (an architectural project manager and the founder, president, and treasurer of The American Street Cat, Inc.), was made of 300 aluminum cat-food cans and insulated with recycled denim.

Pilot Projects’ entry—the DIY NYC Cat Fort—was, in Wadler’s words, “a thatched cat tepee out of branches and brush.” According to the description on Pilot Projects’ website (where you can find plans), the design team’s research was “based on extensive fort-building and wilderness survival training,” the kind of project intended for “rather adventurous children ready to build forts for cats in the park.”

This year’s winning submission was M Moser Associates’ raised, multi-story Cat Coop. Congratulations to designers Scott Francisco and Anne Chen—and, of course, to all those streets cats who are movin’ on up!