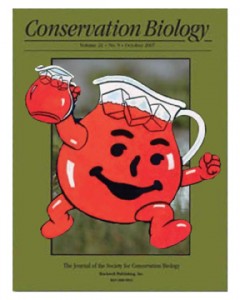 Three months after my letter to Conservation Biology was rejected, it’s become apparent what they were really looking for: applause, not criticism.

Of course it probably doesn’t help that I’m not a member of the club; I don’t even know the secret handshake. (Michael Hutchins, writing for the Wildlife Society Blog, “Making Tracks,” has accused me—an outsider—of trying to “out-science the scientists.”)

The reasons behind this lack of opposition are unclear, but it may be that conservation biologists and wildlife ecologists believe the issue of feral cats has already been studied enough and that the work speaks for itself, suggesting that no further research is needed. Or, they simply do not want to devote time and energy to the issue and are unaware of policy actions.

I’d like to offer an alternative explanation. Yes, the work speaks for itself, but there are plenty of observers—surely, there are conservation biologists and wildlife ecologists among them—who don’t particularly like what it’s saying.

For the next few posts, then, I’m going to present a sampling of the more serious flaws—including exaggerated and misleading claims, botched analyses, questionable research and review methods, and widespread bias—all too common in the feral cat/TNR literature. Let’s see what Lepczyk at al. are cheering about…