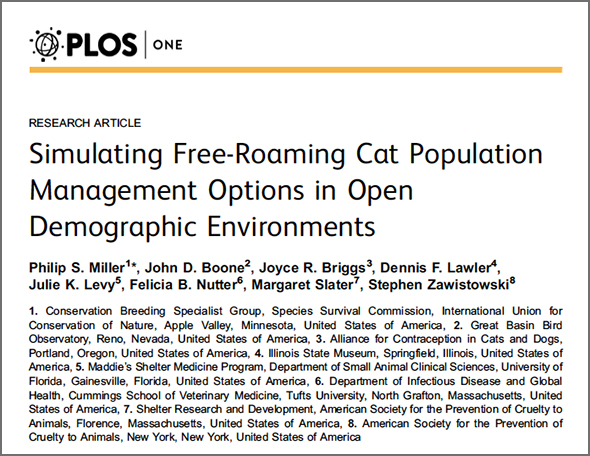 For those of us who have watched colonies of sterilized cats decrease in size over time, the findings of recent population modeling work will hardly come as a surprise. Still, the publication of “Simulating Free-Roaming Cat Population Management Options in Open Demographic Environments” must be recognized as an enormously important contribution to the body of literature concerned with the management of unowned free-roaming cats in general, and TNR in particular.

Unlike previous modeling efforts, which typically assume (for simplicity’s sake) that a given population of cats is “closed,” this work, conducted by a large, diverse group of researchers affiliated with the Alliance for Contraception in Cats & Dogs,* accounts for “dispersal,” the ability (and tendency) of some cats to leave a colony and others to move in, as well as the abandonment of litters (an unfortunate reality), factors known collectively as “demographic connectivity.”

In other words, this model better reflects real-world conditions.

It’s significant, then, that this research demonstrates TNR’s potential to stabilize and reduce populations at the colony, or even neighborhood, level (as has been documented in numerous well-documented success stories [1-7]). Even more important, the findings illustrate the relative effectiveness of TNR in comparison to the traditional trap-and-remove method.

In the first case, let’s assume “removal” is the traditional approach—roundups by ACOs, commercial trappers, and so forth. They’d need to capture 20 percent of the cats in a particular area (in this case, the “focus population” resides in an area about 25 square blocks in size) every 6 months in order to maintain that negative long-term population growth rate.

Using TNR, the effort required is admittedly greater: 30 percent of the cats would need to be sterilized every 6 months. But, as we all know, it’s more complicated than that.

Pull some cats or kittens for adoption, for example, and that 30 percent threshold is decreased. And then there’s the trapping effort. It’s reasonable to assume that, generally speaking, TNR trappers are more committed to (1) focusing on the unsterilized and trap-shy cats, and (2) ongoing follow-up trapping, compared to trappers concerned only with the immediate removal of cats.

This model, however, assumes that the trapping efficiencies for trap-and-remove and TNR were identical, thereby understating TNR’s effectiveness.

Of course, other factors must be considered, too, as the authors acknowledge:

“The biological processes modeled in this study are critical for determining optimal solutions for [free-roaming cat] population management, but economic, social and other considerations also will factor prominently into the final choice(s) among multiple management options.” [8, emphasis mine]

And chief among those social considerations—perhaps the one most often overlooked or ignored (or, in some cases, badly misrepresented) by opponents—is TNR’s broad public support. [9-11]

Again, all of this is hardly news to many of us—but the findings of this research are nevertheless important. Although such work is unlikely to prevent the flat-earthers from insisting that TNR “doesn’t work,” it might make it a little easier to persuade those who are actually interested in a solution.

* Full disclosure: Best Friends Animal Society, for whom I’ve worked since May 2013, sits on ACC&D’s Council of Stakeholders.