It’s difficult to determine how these things get started—how the results of a well-documented experiment conducted nearly 40 years ago become twisted into the frequently made—and widely-accepted—claim that “even well-fed cats hunt.”

This would appear to be a case of validity through repetition: repeat a claim often enough and, eventually, people will come to believe it’s true—never bothering to check the original source. (Pro Tip: For added efficacy, click the heels of your ruby-red slippers together while repeating the claim.)

This, it should go without saying, is not how science is supposed to work.

The latest “sighting” was in a June 30 letter from Grant Sizemore, Cats Indoors program officer for the American Bird Conservancy, to the Kaua‘i County Council. In it, “ABC encourages the Council to follow the [Feral Cat] Task Force’s Final Recommendations and to enact a ‘comprehensive animal control ordinance that sets a goal of zero feral, abandoned, and stray cats on the island by the year 2025.’”

It’s not clear if Sizemore included with his letter a check for the several million dollars necessary to eradicate outdoor cats from the island, but I suspect not.

It’s also not clear if Sizemore actually read the paper he cites in support of his claim. Again, I suspect not. His predecessor, Linda Winter, didn’t even get the author’s name right when she cited the work 10 years ago: “Adamac [sic] showed that hunger and hunting behavior are controlled by different portions of a cat’s brain.” [1]

In Domestic Cat Predation on Birds and Other Wildlife, ABC makes the claim—under the heading The Truth About Cats and Birds—that “well-fed cats do kill birds.”

“Well-fed cats kill birds and other wildlife because the hunting instinct is independent of the urge to eat. In one study, six cats were presented with a live, small rat while eat­ing their preferred food. All six cats stopped eating the food, killed the rat, and then resumed eating the food [2].” [3]

Did you catch the part where the dead rats are used as evidence that “well-fed cats do kill birds”? It’s a move straight out of ABC’s communication manual—but this, as we’ll see shortly, isn’t even the worst of it.

Also from Domestic Cat Predation on Birds and Other Wildlife: “One well-fed cat that roamed a wildlife experiment station was recorded to have killed more than 1,600 animals (mostly small mammals) over 18 months.” [3] The paper to which this claim refers, published in 1949, makes no mention of the cat’s diet, per se. We—and ABC—have no way of knowing if he was well-fed or not. What G.W. Bradt tells us is that the cat—“one of a litter of kittens at our residence on the station area … has a little swinging door which allows him to enter and leave the house as he pleases at all times. He roams at will over the adjacent farm lands.” [4] And this:

“The cat is remarkably gentle with his prey, and most of his captures, even the small birds, are apparently uninjured. In fact, many of these have been released by us, and have flown away at once.”

And finally, Bradt leaves the reader (quite an act of faith, that—the assumption that his work will actually be read) with this important bit of context: “While the record of this cat may not be characteristic of cats in general, it is a positive statistical record, and when considered with the few authentic food records available, does cast a doubt upon the traditional idea that cats are vicious predators on song birds and game.” [4]

All of which was, not surprisingly, lost on ABC.

Among the other TNR/community cat program opponents who have cited Adamec’s 1976 paper:

Travis Longcore, science director of the Urban Wildlands Group (lead plaintiff in the case that led to the injunction against city-supported TNR in Los Angeles) and president of Los Angeles Audubon (2009): “Contrary to claims that well-fed cats pose little threat to wildlife, hunting and hunger are not linked in domestic cats (Adamec 1976).” [5]

Disgraced former Smithsonian researcher Nico Dauphiné (2009): “Experimental evidence has shown a lack of connection between hunger and hunting in cats (Adamec 1976), such that well-fed cats may be no less likely to kill.” [6]

David Jessup, wildlife veterinarian for the California Department of Fish and Game, now retired, included Adamec among four sources he cited in a 2004 paper to support his claim that “it is in cats’ nature to hunt.” [7]

The oldest example I was able to find during a cursory review of my own files was from 1997, in which John Coleman and Stanley Temple, authors of the infamous “Wisconsin Study,” write: “Even when fed regularly by people, a cat’s motivation to hunt remains strong, so it continues hunting.” [9] (Judith Webster got it right in her 2007 well-researched paper Missing Cats, Stray Coyotes: One Citizen’s Perspective—calling out Coleman and Temple for their particularly egregious “interpretation” of Adamec’s work.)

Finally, the… you know… actual paper

Anybody who’s hung in there this long deserves at least to find about what Adamec actually reported in that 1976 paper. A brief summary, then:

The cats involved were deprived of any food for 47 hours before being fed, one at a time, their favorite food (determined in earlier testing) in a 35-square-foot enclosure (as shown in the figure below). After the cat began to eat, a rat was placed in the enclosure. In 35 of 36 instances, the cat left its food to attack and kill the rat—which was, at the time, just four feet away. [2] 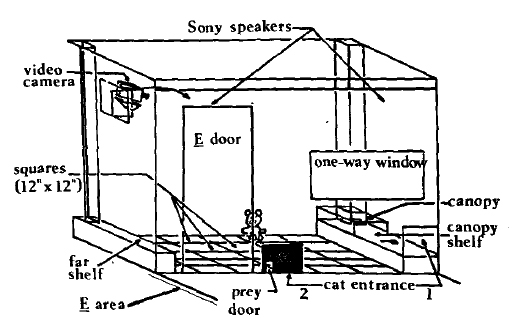 It’s quite clear that the cats were neither well-fed nor hunting. Equally clear: the experimental conditions simply do not reflect conditions “in the wild.” Indeed, Adamec himself acknowledges as much:

“Generalizations to wild predators may seem inappropriate since this experiment was conducted in ‘contrived’ laboratory conditions creating a situation of prey-predator proximity with elimination of the opportunity of prey flight as an antipredatory response.”* [2]

Moreover, in related work published just four years later, Adamec reported that “none of the satiated [feline] adults killed prey.” [10] Rather, “the likelihood of lethal attacks was found to vary with the degree of decrease of defensiveness [in cats] shown in response to hunger.” [11] And: “Hunger facilitates pawing attack and intensifies biting.” [11]

It’s not clear if Sizemore and ABC are ignorant of the research underlying their long-standing claim, or whether their misrepresentation is deliberate. I suspect it’s both, though I don’t know how much that matters, really. Whatever the case, it’s clear that they simply have no credibility whatsoever on this issue.

*Adamec continues, explaining that “just such conditions of proximity and elimination of antipredator protection have been reported in the wild, associated with ‘excessive killing’ in a variety of mammalian predators,” but also concedes that “the conditions for its occurrence rarely arise.’ [2] And Kruuk, whose work Adamec cites, goes further: “From the ecological point of view, the rarity of the coincidence of the various factors necessary to produce a large mass-kill indicates that generally the consequences of surplus killing on the population level are small. Even when mass-killings do occur, it is not certain that this immediately deprives the carnivore of part of its resources—the individual prey animals involved are not necessarily the ones that are vulnerable to normal ‘regular’ predation of the particular species of carnivore.” [12]

6. Dauphiné, N. and R.J. Cooper, Impacts of Free-ranging Domestic Cats (Felis catus) on birds in the United States: A review of recent research with conservation and management recommendations, in Fourth International Partners in Flight Conference: Tundra to Tropics2009. p. 205–219.