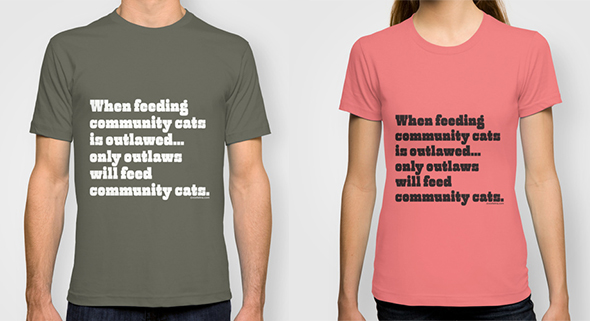 The timing could hardly have been better. Less than 12 hours after I uploaded the artwork for the latest Vox Felina gear, I learned that the Virginia Supreme Court had, just last Friday, decided in favor of caretaker Susan Mills, who’d been cited in 2011 for feeding community cats. As a story in the Richmond Times-Dispatch explained, the Court ruled that the zoning ordinance violation “is unenforceable because it was overly broad.”

While it remains unclear whether Henrico County will pursue the matter further (e.g., revising their zoning ordinance), the area’s community cat advocates are celebrating.

“Together, as a team,” wrote Robin Robertson Starr, chief executive officer of the Richmond SPCA, in a blog post Monday, “we showed that we can give animals the voice they deserve. It is wonderful to know that the voice we gave them was truly heard. Henrico could not tell us not to care.”

Let’s hope the celebration is still in full swing next Friday, when I’ll be visiting the Richmond SPCA for a Lunch & Learn session “myth-busting” some common claims about rabies and cats. The event is free but registration is encouraged. Any donations received will be designated for the Henrico Feral Defense Fund, established in Mills’ honor.

As I say, the timing for this new gear could hardly be better.

So, from now until the end of September, all proceeds from my “Outlaw Feeder” products (t-shirts, tanks, hoodies, and tote bags) will also be donated to the special fund.

Because, like Susan Mills and the Richmond SPCA team, I believe compassion is something that can’t be outlawed.