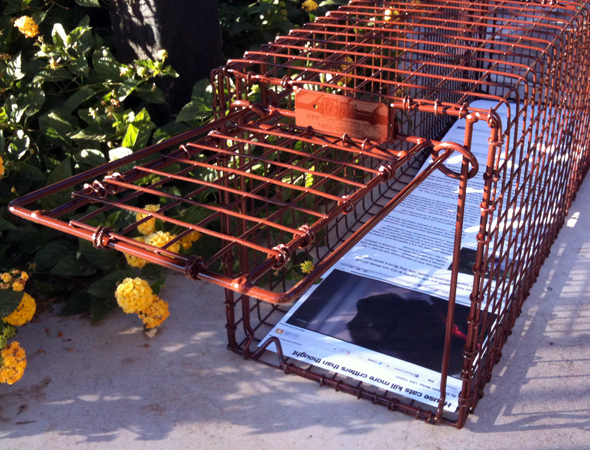 “Like so many others of my tenure and temperament—stubborn ancients, I suppose—web reporting is anathema to everything I love about newspapering: getting a tip, developing leads, fleshing-out the details, then telling the story.”

“Now,” laments former Times-Picayune reporter Chris Rose in the August issue of the Oxford American (excerpted in the current issue of Utne), “it stops with the tip. Just verify (hopefully!) and post it. I didn’t write stories anymore; I ‘produced content.’”

Perhaps this emphasis on “web reporting” explains the largely pathetic coverage surrounding the free-roaming cat/TNR issue. There’s probably not even a tip in many cases, just a press release.

Whatever the cause, the effect (in addition to a misinformed public, misguided policy, etc.) is a very competitive field for the 2012 Trap Liner Award.

For readers who missed last year’s TLA, a little background…

Inspired by my friend’s “birdcage liner” story, and by Nathan Winograd’s Phyllis Wright Awards (“given to those who epitomize everything that is wrong with our broken animal ‘shelter’ system”), I created the Trap Liner Award, which recognizes the writer or publication that, over the course of a given year, best demonstrates a tragic failure of journalistic integrity while fueling—intentionally or not—the witch-hunt against feral cats.

Among the strongest contenders for 2012:

Contributing editor Jordan Carlton Schaul’s interview with “his friend and distinguished colleague” Michael Hutchins met the deadline with a week to spare. But, although the piece—little more than a compilation of Hutchins’ propaganda from his blogging days as executive director and CEO of The Wildlife Society, really—fulfills the requirements for the TLA, the competition was simply too fierce this year.

Still, I suppose National Geographic deserves some sort of special recognition for failing to approve my comment for nearly a week now.

According to a headline in the July 9th issue of the Tampa Bay Times, there was “no jolly Disney ending for endangered Key Largo wood rats bred at Animal Kingdom.” And, explains reporter Craig Pittman, referring to ORCAT, the Ocean Reef Club’s well-known TNR program, “wildlife biologists didn’t have to look far for the reason.”

Actually, Disney does a far better job of storytelling than either Pittman or his biologist-sources do. Disney pays attention to cause-and-effect, for example.

Pittman, on the other hand, provides no evidence to support biologist Darren Wostenberg’s claim that “the feral cats were just wiping [captive-bred woodrats] out.” Indeed, as Pittman himself explains, when the last of them were released last December on Palo Alto Key—where there are no feral cats—they fared no better: “Within a month, nearly half were dead, gobbled up by owls and other predators from the skies.” [1]

Just a month into the new year, Akron Beacon Journal reporter Kathy Antoniotti essentially short-listed herself with her February 4th story “Experts disagree on trap, neuter and return policy for cats.” The problem, as is so often the case, is with Antoniotti’s choice of experts.

“In seven years,” she reported, citing HSUS as her source, “one female cat and her offspring theoretically can produce 420,000 cats.” But HSUS was backing away from this absurd figure at least six years ago.

Far more problematic, however, was her blind faith in American Bird Conservancy president George Fenwick. Responding to my criticism of her story, Antoniotti argued, “It is my job to make sure that both sides are represented in any story I do, and Mr. Fenwick has impressive credentials as a scientist.”

Regular readers will recall that last year’s TLA went to Mother Jones’ senior editor Kiera Butler for her article “Faster, Pussycat! Kill! Kill!” in the magazine’s July/August issue. A year later, it looked like she was making a run for this year’s prize.

In “Kitties, Rabies, the Plague, and You,” Butler (prompted, apparently, by an ABC media release) summarized longtime TNR opponents Rick Gerhold and David Jessup’s paper, “Zoonotic Diseases Associated with Free-Roaming Cats,” declaring: “In the never-ending war between cat people and bird people, troops on either side gather ammunition in the form of research. Add this one to Team Bird’s quiver.”

With columnist Tom Palmer (who’s made it his job to head up the feral cat witch-hunt in Polk County) on staff, the Winter Haven, Florida-based paper is always in the running for the TLA. This year, though, it was reporter Jeremy Maready’s November 2nd story that got my attention.

Among my many objections to the piece: Maready’s erroneous claim (based on a 2004 article in the Journal of the American Veterinary Medical Association) that HSUS opposes trap-neuter-return, and his reference to a letter from the New Jersey field office of the U.S. Fish and Wildlife Service—circulated by TNR opponents and found on the ABC website (PDF)—as “a 2009 letter by the U.S. Department of the Interior.” [2]

One wonders if he would have been better off leaving out his Feathered Friends chapter, in which he criticizes people who feed birds (“Many cannot conceive that they may be doing something that’s not beneficial to either birds or their environment, and some become almost aggressively self-righteous at the suggestion that what they do is the least bit harmful.” [3]) Doing so would have made it far easier to attract the support of ABC!

But Sterba’s not entirely out of luck. He’s the opening act for the 2013 Wildlife Expo, sponsored by the Nuisance Wildlife Control Operator Association and the National Pest Management Association—“the only people who will have them,” as one of my colleagues put it. (Later that same day, the audience will hear from the University of Nebraska–Lincoln’s Stephen Vantassel, co-author of the infamous Feral Cats and Their Management, who will be presenting Wildlife 101: Basic Trapping.)

And the Winner is…

As I say, it was a very competitive year. Reviewing the many “nominees,” however, one stands out above (or is that below?) all of the others: Elizabeth Weise’s August 7th piece for USA Today.

In “House cats kill more critters than thought,” Weise (“science and food safety reporter for USA Today’s Life section,” according to her bio) twisted the ABC/TWS “KittyCams” media release—plenty misleading to begin with—into something fit only for the most sensational tabloids.

“That mouse carcass Kitty presents you with,” read the story’s rather gory lede, “is just the tip of a very bloody iceberg. When researchers attached kittycams to house cats, they found a secret world of slaughter.” [4]

This is science reporting?

But Wiese didn’t stop there. “The cats,” she wrote, “brought home just under a quarter of what they killed, ate 30 percent and left 49 percent to rot where they died.” And “the carnage cuts across species.” [4]

So how did she reconcile all of this hyperbole with Kerrie Anne Loyd’s admission during an interview with CBS Atlanta in April that “cats aren’t as bad as biologists thought”? [5] Weise didn’t bother. Nor—apparently taking her cue from ABC/TWS—did she mention that just five birds were killed over the course of the study (in which 55 cats were monitored with 2,000 hours of video).

The sad fact is, such details would probably have made the story less attractive to the numerous publications that re-ran or borrowed heavily from it (e.g., TribLive, the Atlanta Journal-Constitution, and Field & Stream). I’ll bet I saw at least two dozen different versions over the 48 hours following the publication of Weise’s original piece.

Which is, in contrast to solid reporting, what content is all about.