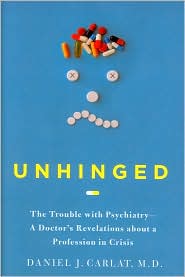 “The reason that we have a peer review process is to assess the quality and likely validity of scientific data and their interpretation… One goal of the peer review process is to assess an author’s command of the existing literature and whether or not it is being cited selectively to support the author’s views, without critical evaluation of contradictory evidence.” —Michael Hutchins, CEO and Executive Director of The Wildlife Society, May 3rd blog post.

Just a week after my previous post—in which I pointed out some high-profile failures of the peer-review process Hutchins defends—I caught this related interview on NPR’s Fresh Air.

In his book Unhinged: The Trouble with Psychiatry—A Doctor’s Revelations about a Profession in Crisis, Dr. Daniel Carlat reveals that about half the articles written about the antidepressant Zoloft where, at one time, actually ghostwritten by non-physicians working for a marketing firm, and funded by pharmaceutical giant Pfizer (the maker of Zoloft). Prominent psychiatrists were then paid to put their names on the bogus work.

Where was the peer-review process—designed to protect against such practices—in all of this? Once again, it seems, the system failed miserably. According to Carlat:

“…these were in journals such as the New England Journal of Medicine, the Journal of the American Medical Association, the American Journal of Psychiatry, etc. So essentially all the top journals that doctors read were publishing unbeknownst, I’m sure, to the journal editors—ghostwritten articles written by an advertising firm, essentially pushing the benefits of Zoloft, and they were being paid to do this by Pfizer.”

The fact that a major drug manufacturer would attempt such a thing is—sadly—not entirely surprising. The fact that these articles were actually published in a number of prestigious journals, though—that is a surprise.

And it highlights a key point I’ve made numerous times already: publication in well-regarded journals is a guarantee of neither the work’s validity nor the authors’ integrity.

Still, the most unsettling part of the story is its epilogue. A recent study cited by Carlat indicates that 10–20% of articles in such journals are still being ghostwritten. And, although the incident prompted some new policies concerning disclosure, there seems to be no accountability for the people responsible. “You would think that there would be repercussions,” Carlat told Fresh Air guest host Dave Davies. “However, there have not been any such repercussions.”

This, too, sounds familiar. Rather than address the misrepresentations, errors, and biases I pointed out in the Longcore paper, for example, Conservation Biology chose to publish more of the same.

Clearly, the “independent peer-review process” Hutchins refers to in his post is the ideal. Its real-world manifestation, however, varies considerably. Too often, it seems, the emphasis is on peers, at the expense of independence and review.